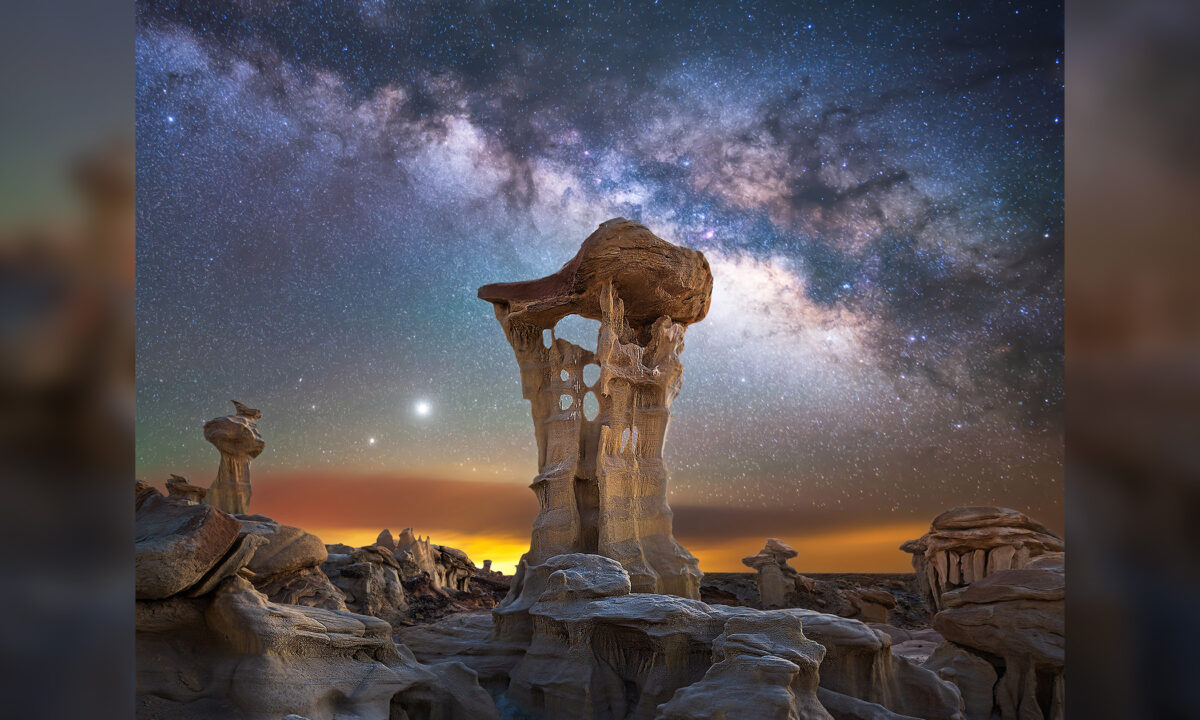 While many saw COVID-19 as a source of fear and anxiety—with its mandates and masks, vaccines, quarantines, and tests—last year, one California nature and astronomy photographer saw the virus as an opportunity to escape into the desert, and take stunning shots of sandstone formations in New Mexico set against a vast celestial Milky Way backdrop.

“With the pandemic in full swing, it was the perfect time to drive to a remote desert and camp away from civilization for a few days,” software engineer Marcin Zajac, 33, told The Epoch Times. “The landscape here looks otherworldly, especially once the sun sets and the stars appear,” Marcin added, speaking of a unique hoodoo outcropping known as the “Alien Throne,” which he captured in the state’s north-westerly Valley of Dreams.

Setting up a wide-angle shot, Marcin photographed the stellar spectacle for his composition using a star tracker, which allows exposures of up to five minutes, increasing detail while reducing noise. Taking separate shots for his foreground, Marcin captured the “extraterrestrial” monolith for a composite montage. “My goal is to capture the beauty of the natural world we live in,” Marcin told the newspaper. “I find myself drawn to grand landscapes under spectacular, vibrant conditions.”

He submitted the fruits of his labors to NASA; and the photo was selected for the space administration’s Astronomy Picture Of the Day (APOD), which features on their website.

The photographer, from Poland originally, now based in the San Francisco Bay Area, takes regular road trips throughout the Western U.S. in search of spectacular portraits of Heaven and Earth, which he presents on his Instagram.

Last spring, he captured the awesome sight of a blazing inferno in Yosemite National Park—a prescribed fire he was privy to—which he described as a “surreal experience,” driving on a road flanked on either side by fire, inside his car feeling heat emanating from outside.

Also last year, Marcin went on a remote wilderness trip in Utah, traversing a “washboard” of dirt road for 50 miles in his rental car, which ultimately yielded a late-night Milky Way spectacle arching over a wonderfully S-curved canyon.

In addition to his NASA APOD laurels, Marcin was also shortlisted three times for the Astronomer Photographer of the Year Award, organized by Royal Museum Greenwich—distinctions he said he’s immensely proud of.

Here is more nature photography that seems out of this world taken by Marcin Zając: