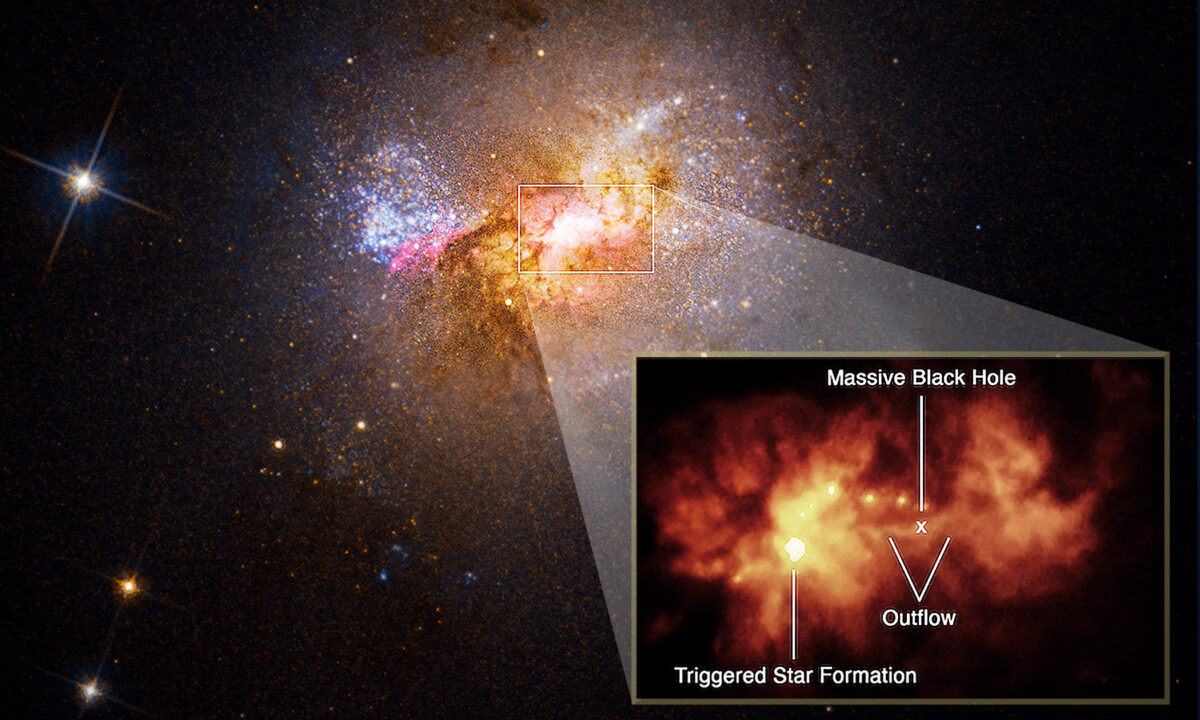 Black holes—like monstrous, cosmic super villains—habitually wreak havoc in space, tearing stars to pieces, consuming anything that comes too close, even preventing light from escaping their clutches. The role black holes play on the universal stage is mostly a destructive one.

But foiling this villainous depiction, researchers recently discovered a cluster of newly forming stars in dwarf galaxy Henize 2-10—stars whose birth was fostered, not thwarted, by the outflow of a relatively small black hole (yes, black holes have particle jet outflows above and below their massive “disks”) that previously laid undetected.

In cosmic terms, the galaxy Henize 2-10, which lies approximately 30 million light-years from Earth in the southern constellation Pyxis, is relatively small, having about one-tenth the number of stars as our Milky Way. This dwarf galaxy and its newfound black hole, together being analogous to the lives of larger celestial behemoths, could help solve the mystery of how supermassive black holes today first formed at younger stages of the universe.

“From the beginning, I knew something unusual and special was happening in Henize 2-10, and now Hubble has provided a very clear picture of the connection between the black hole and a neighboring star-forming region located 230 light-years from the black hole,” said researcher Amy Reines, who published a study on the dwarf galaxy in the Jan. 19 issue of Nature.

That connection is a stream of gas from the black hole’s outflow stretching across space like a cosmic “umbilical cord” to a “stellar nursery,” NASA described. Hubble observed gas moving at a relatively “low velocity” of about 1 million miles per hour toward a cocoon of dense gas, hitting it like a garden hose spraying a pile of dirt, spreading it out.

Now, usually, fallout material in other black hole galaxies in such instances would be whisked away by the surrounding magnetic fields and fall back in, while forming blazing jets of plasma approaching the speed of light. Nearby gas clouds, heated by these jets, would be unable to cool back down enough to form stars.

But in the case of Henize 2-10, the outflow observed caused just enough compression of dense gas to precipitate the formation of newborn stars.

“At only 30 million light-years away, Henize 2-10 is close enough that Hubble was able to capture both images and spectroscopic evidence of a black hole outflow very clearly,” said Reines’s graduate student Zachary Schutte, lead author of the study. “The additional surprise was that, rather than suppressing star formation, the outflow was triggering the birth of new stars.”

Reines’s initial interest in starburst galaxy Henize 2-10 as a graduate student led to the discovery of its previously unknown resident black hole (which is around 1 million times the mass of our sun—supermassive black holes of over 1 billion solar masses have been observed in larger galaxies, such as, yes, our Milky Way). Researchers previously surmised that a supernova remnant resided in Henize 2-10. But distinctive emission patterns told a different tale.

“Hubble’s amazing resolution clearly shows a corkscrew-like pattern in the velocities of the gas, which we can fit to the model of a precessing, or wobbling, outflow from a black hole,” Reines said. “A supernova remnant would not have that pattern, and so it is effectively our smoking-gun proof that this is a black hole.”

The discovery of this cosmic nursery, Reines believes, could in the future lead to deeper research into the formation of larger galaxy black holes, offering clues to the mystery of how supermassive black holes formed in the early universe. According to NASA, there are currently three theoretical scenarios revolving around this question:

1) they formed just like smaller stellar-mass black holes, from the implosion of stars, and somehow gathered enough material to grow supermassive, 2) special conditions in the early universe allowed for the formation of supermassive stars, which collapsed to form massive black hole “seeds” right off the bat, or 3) the seeds of future supermassive black holes were born in dense star clusters, where the cluster’s overall mass would have been enough to somehow create them from gravitational collapse.

For Reines, galaxies such as Henize 2-10 may hold the key to unlocking the past. “The era of the first black holes is not something that we have been able to see, so it really has become the big question: where did they come from?” Reines pondered. “Dwarf galaxies may retain some memory of the black hole seeding scenario that has otherwise been lost to time and space.”