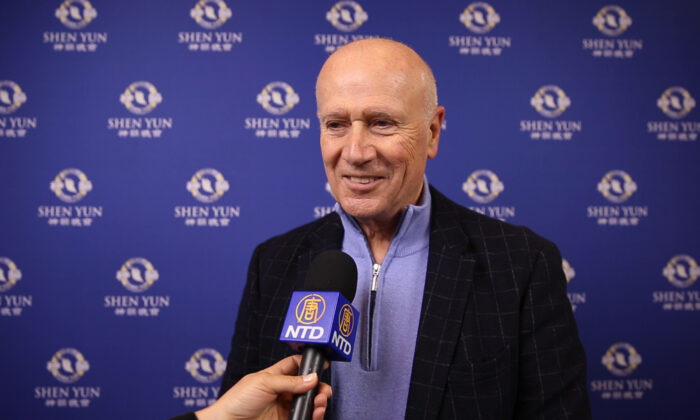 Company director Jean-Max Brison enjoyed Shen Yun at the Corum in Montpellier, France on March 11, 2020. “What a powerful energy! The dancers are great, the music too, it's a beautiful ensemble,” he said. (NTD Television)

MONTPELLIER, France—President and founder of the consulting firm Financiel Partners,  Toulouse resident Jean-Max Brison found the 155-miles-drive to the city of Hérault exhilarating, as he was about to see for the first time the famous New York-based Chinese classical dance company, Shen Yun Performing Arts.

“As Westerners, it really touches our heart, and gives us access to the Chinese culture,” said Jean-Max Brison at the end of the Shen Yun performance, at the Corum of Montpellier on Wednesday, March 11, 2020.

Nothing in the world could have prevented Brison from attending the show some describe as a “global cultural phenomenon.”

At the end of the performance, the company director was full of praise for the symphony orchestra accompanying the dancers in a harmonious blend of Western instruments and traditional Chinese instruments such as the erhu or pipa.

“Fantastic, yes! Particularly, the two-stringed erhu, with this virtuoso who manages to produce fabulous sounds! It’s great!” said Brison, who was particularly impressed by the performance of soloist Xiaochun Qi.

Taken by the beauty of the choreography, where the female dancers’ grace and lightness only compete with the strength and vigor of their male counterparts, Jean-Max Brison was also sensitive to the spiritual dimension of the show.

The values of loyalty, courage, perseverance, and benevolence carried by the artists of Shen Yun have particularly touched the heart of the Toulouse entrepreneur.

“It speaks to me, although I personally am an atheist, I always respect other people’s opinion. In any case, as in many religions, we can feel the beautiful values! That’s the main thing. And there is a lot of commitment behind it,” said Brison.

‘The dancers are great, the music is great too, it’s a beautiful combination!’

If the teachings given at the Fei Tian Academy of Arts of in New York allow the artists to foster an extraordinary ease and their impeccable technical skills, they are also keen to revive the 5,000 years of traditional Chinese culture and to perpetuate the unbreakable link between art and the divine that enabled the Middle Kingdom to reach its apogee.

“Throughout history almost every culture looked toward the divine for inspiration. Art was meant to uplift, bringing joy to both the people who created and experienced it. It is this principle that drives Shen Yun performers and their art,” says the website of the Chinese classical dance company.

A tradition that the artists of Shen Yun in turn embody, and which undeniably adds soulfulness. “It is why audiences can feel there is something different about Shen Yun,” says the company.

For Brison, this rang true. “It’s a very lively and at the same time very peaceful, lots of serenity, of warmth—it’s a peculiar feeling,” says Brison.

“I discovered that this company was multifaceted, seven companies in the world, I didn’t know that! What a powerful energy! The dancers are great, the music too, it’s a beautiful ensemble!” he added.

It was an unforgettable experience that the sexagenarian recommends wholeheartedly: “A very beautiful show, very, very different from what we usually see!” enthusiastically concluded Jean-Max Brison.