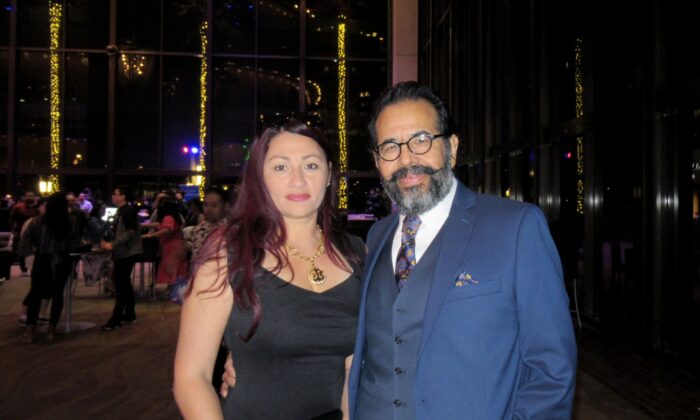 Paco Veliz and Angie Rodas at the Terrace Theatre in Long Beach, California on May 7, 2022. (Michael Ye/The Epoch Times)

LONG BEACH, Calif.—Artist Paco Veliz and supervisor Angie Rodas were delighted by Shen Yun at the Terrace Theater on May 7.

“Well, it was my first time. I’ve never seen anything like it. The colors, it’s beautiful. The combinations, the dancing, it’s new to me,” said Ms. Rodas.

“I like the whole aspect of how it’s being displayed—the angels, heaven, the dancing. Everything is beautiful,” she added.

As a painter, Mr. Veliz appreciates how Shen Yun uses art to uplift and create harmony.

“That together creating harmony, it can be accomplished through arts, through the arts. I like it. I like it a lot,” he said.

“I think it gives people that are not familiar with the culture, Chinese culture, to have a look at what it is, and it makes us all connect with one another. And it makes us look at each other more as equals; that we are the same, basically, no matter where we are in any part of the world—and if we can do it through art even better,” he added.

China was once known as “The Land of the Divine” and Shen Yun presents this culture by drawing upon the Middle Kingdom’s Buddhist and Daoist philosophies. In the past, artists looked to the divine for inspiration and cultivated virtue in order to create uplifting art.

Today, Shen Yun’s artists follow this noble tradition, which is why audiences feel there is something different about Shen Yun, says the company’s website.

This was Mr. Veliz’s second time at Shen Yun and he said both times, he left feeling uplifted.

“It gives you a sense of harmony with the world, I love it … it’s uplifting,” he said.

“It gives you the message that we are pretty much the same—we have the same aspirations—we all hope for a peaceful world. You can see it in the theater everybody’s connected to the performers. And I love that.”

“It’s a wonderful exercise in synchrony and it’s also paying attention to the traditions of the Chinese … it’s exceptional,” said Dr. Cannom.

Since Shen Yun’s inception in 2006, its mission has been to revive the traditional culture of China through music and dance and to share it with the world.

“I thought it gave a great feeling of life and joy in life,” said Mr. Schoettle.

“China is an old, old culture and it predates ours by … thousands of years and it’s coming back,” he said.

“I think it had a lot of good, a lot of strong values there. I’m concerned about the present but I think this dancing music reminds us of the older [China] and that’s good.”