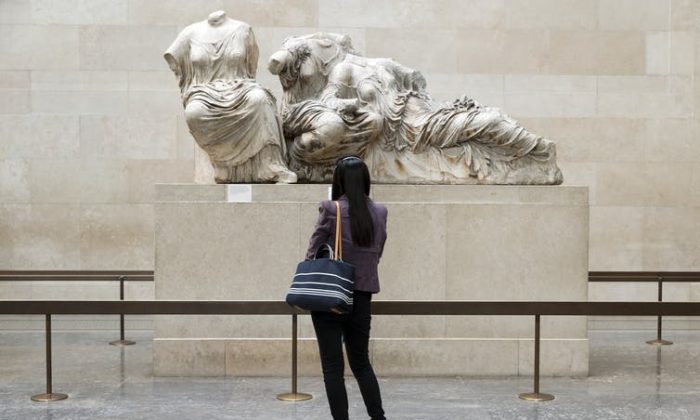 Art Psychotherapy Can Help People Explore Themselves Through Museum Exhibits

The idea of receiving psychotherapy in a museum might seem unusual. However, art psychotherapists are increasingly looking towards the rich resources of museums and galleries to aid them in their clinical work.

Art therapy, or art psychotherapy, sees people express their feelings and experiences through art, as well as (or instead of) through words. It can be used to help people of all ages, living with a wide range of emotional or physical conditions.

The United Kingdom’s National Health Service (NHS) art psychotherapists usually work in designated therapy rooms in hospitals or outpatient centers, but for our recent study we wanted to explore how conducting art psychotherapy in a museum could be beneficial to a group with complex mental health difficulties.

Research has found that people “see themselves” in museum objects and that reflecting on our responses to objects can tell us something about ourselves.

For example, an object can evoke powerful emotions, or symbolize an aspect of our current or past experiences. So we wanted to tap into museum objects to help our participants develop greater self-understanding. To our knowledge, this was the first time that museum objects would be used for this kind of art psychotherapy for adults accessing NHS mental health services.

We predicted, based on findings from arts in health and art therapy case studies, that a museum setting could help to inspire creativity among the group members. There is also evidence that a non-clinical space can help people feel more connected to each other and their local community, and less “set apart” by their mental health difficulties.

Working for ²gether NHS Foundation Trust, we delivered a programme for seven adults aged 18-25 at two museums in Gloucester over 18 weeks. Each session lasted for 90 minutes and started and finished in a private education room at the museums.

The group members explored the museum exhibitions and then made some art using a variety of different materials. In the beginning, we suggested some tasks (such as finding three objects to represent their past, present, and future) but as the weeks went on, they increasingly found objects they connected with. At the end of each session, there was time for verbal reflections, as a group.

Speaking to the group members after the final session, and having observed the sessions as they went along, we discovered just how effective the use of museum objects can be, particularly for self-exploration.

Susie (all names have been changed to protect identities) saw her desire to “wipe away the past and start again” reflected in a Victorian writing slate, and drew a modern-day device for making images and then erasing them. She also took inspiration from a model of a cross-section through the earth, drawing herself as a person with three layers and labeling it “what I show to others”, “what those close to me get to see”, and “what I feel about myself that hardly anyone knows.”

Another person who attended the sessions, Ellie, was inspired by a repaired Roman pot. She made a collage which expressed her sense that she was “piecing together bits in my life.” Caroline, meanwhile, made a timeline of her life (including some very traumatic experiences), saying that “I wouldn’t have done it if I hadn’t seen the timeline in the exhibition, but it felt very significant to do it—like putting things in place before moving on.”

Although not all the group members made artwork during the sessions, they still found therapeutic value in their encounters with the objects in the museum. Tasha, for example, was not always able to create art in the group but still reported that “using objects for self-reflection was useful.”

Several of the group members said that the exhibitions encouraged playfulness, as well as inspiring their creative work and that this “meant that the group loosened up.” Some said that they felt less defined by their mental health difficulties because the group was not held on NHS premises. Our museum sessions also encouraged independence and helped participants to feel valued and connected to the world outside mental health services.

As one participant put it:

You feel like you are a real person working on your own personal goals rather than just a patient going through treatment…You wouldn’t necessarily have thought that pulling objects out of museum boxes and wandering around looking at artefacts would help you feel better or make progress in recovery, but you would be surprised.

Building on this work, art psychotherapists from the ²gether Trust have since delivered two more museum-based therapy groups, for adults of all ages, and we have written about our experiences of how we worked in these settings. We are keen to continue to “flex” our practice, stepping out of the usual therapy spaces, and to encourage fellow art psychotherapists to explore how this rich therapeutic resource can help other people too.

Alison Coles is a lecturer in art psychotherapy at the University of South Wales in the UK. This article was first published on The Conversation.