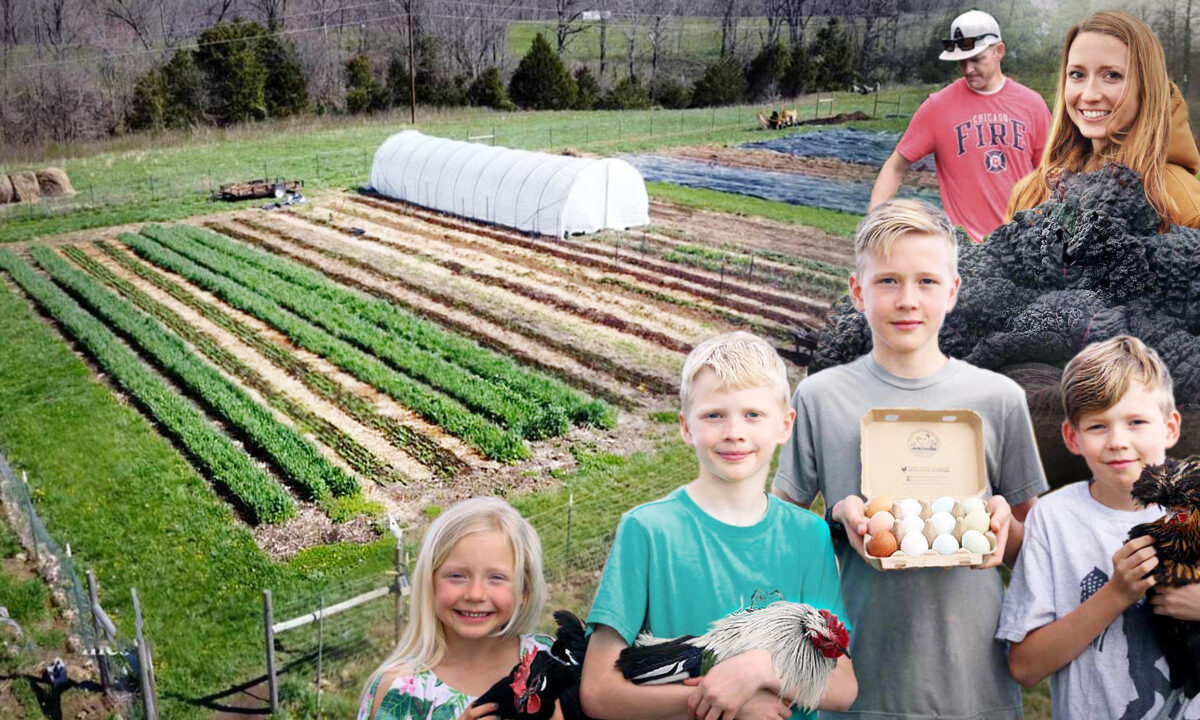 Mad Max never seemed so near at hand. With ballooning inflation and looming food shortages, people are facing potentially hazardous futures. “Experts” and world leaders are calling it a “transition.” Into what, they don’t say, but it looks bad.

Like many even-keeled Americans, though, Becky and Cam Porter from northwest Arkansas are transitioning on their own terms, weathering the storm by getting off the grid and growing their own food.

They’re not fully decoupled yet, but the 52-acre homestead they bought in 2020 now puts them way ahead of the curve, not to mention food on the table.

The Porters dubbed their transition “Our journey to radical self-sufficiency,” though inflation and food shortage was not their initial impetus. It started with the levelheaded realization that industrialized food processes of mega corporations were harming Becky’s health.

“I had pretty severe acid reflux, stomach pain, and I went to several doctors,” she told The Epoch Times. “Medicine didn’t work, and so I turned to try to heal myself.” Growing food at home and eating natural worked wonders. Her stomach problems vanished. “I wanted to take it to the next level,” she said. Then the economy started to head south.

Becky and Cam, who works for Sam’s Club, saw the writing on the wall.

“We kind of held back on talking about this for a while because we didn’t want to incite fear and panic,” he shared in the couple’s vlog. “Just this past week we had some pretty intense meetings around the ocean freight rate increases. Costs are going up pretty dramatically.”

The idea of a self-sustaining homestead materialized. Their plan? To grow food enough to feed themselves and their four kids, and eventually sell their produce. Becky dug up the most savvy regenerative agriculture wisdom on the web, and they went to town plotting a self-sustaining ecosystem that would supply, beyond mere sustenance, peace of mind amidst calamitous foreshadowings.

“The food that I grow, I know how it’s grown,” she told the newspaper. “But I also like the fact that I have the self-sufficiency as a family, and we can produce all our own food and not be so reliant on other people for such a basic thing for life.”

Some might think it extreme—even conspiratorial—to go to such lengths, despite signs of impending havoc. “Some people view it that way, but I don’t view it that way. It’s so important for people to grow their own food. I think that it’s going to be essential,” she said, adding that, with rising prices, others will see the light.

Their land had “no electricity, no nothing” initially, Becky said. They drilled a well, planted a garden, and now have 11 cows, 70 chickens, nine turkeys, six pigs, and a thriving regenerative agriculture ecosystem. They have berry bushes and an orchard. To facilitate breeding, they got a bull. The cows yield meat and could produce dairy if need be.

In addition to a “caterpillar tunnel” to extend growing season into the winter months, the farm came with a barn, in which they had to camp for a month while their house was being built.

“Regenerative agriculture” entails rotating the cows over the farm, to graze and fertilize different parts of the pasture. The grass grows back even better than before. “Cameron has built a chicken tractor,” Becky shared. “It’s never stationary, it’s always moving. It’s like a coupe on wheels, so that manure from your chickens is spread all around your land. We have very low costs on fertilizer.”

The price for self-sufficiency, besides the cost of land, capital, and expenses, is hard work. Their vlog documents the family’s toils: countless hours drying and canning fruits and veggies in the kitchen, sometimes until 2 a.m.; gardening tomatoes, corn, sunflowers, and other crops, rain or shine; the kids get a list of farm tasks. The payoff? They’re now able to grow all the vegetables they need for the year, with some to spare. The pantry is a prepper’s dream.

“You are investing into certain things,” said Becky. “But the way that I’ve done our garden, in the first year I’m able to make that back with how much we save on food costs, especially now with inflation.”

They’re not fully off the grid yet, though. Cam still buys feed in bulk—though they’ve started growing sunflowers and corn to feed poultry and pigs, while the cows just graze. Weaning off power will be a doozy.

Decoupling from electric is a goal. They have a generator in case of a shortage for now. That can run the well. Looking ahead, installing solar panels for the farm is what they’re saving for.

“It’s kind of scary. It’s important for us to become a lot more of a producer rather than a consumer.”

For the kids, farm life isn’t as isolating as it sounds. There’s the church community; and although they’re homeschooled, their eldest, Cruz, 13, will return to public school next fall. They have their freedom. He dreams of joining the Air Force, while Dax, their third child, has taken to farm life and wants to pursue the craft.

The young farmhands are paid for their work. It teaches the value of industry, said mom.

Yet, Becky knows not everyone has the means necessary to attain the Porter ideal of “radical self-sufficiency.”

Urban-locked individuals, lacking land and capital, can buy local and support their community.

“I do get a lot of people who say, ‘I don’t have enough space to grow food,’” she told the newspaper. “If you’re not able to, it’s really important to support your community and to keep your food closer to home. The more you do that you are more resilient, because so much of our food is brought to us by large corporations.”

The purpose of her vlog, The Seasonal Homestead, is to educate and help others face what’s coming down the pipe, and to share their adventures. It’s no longer just conspiratorial “preppers” stocking up; commonsense American families are joining the ranks.