Architect Intrigued by Harmony and Design in Shen Yun 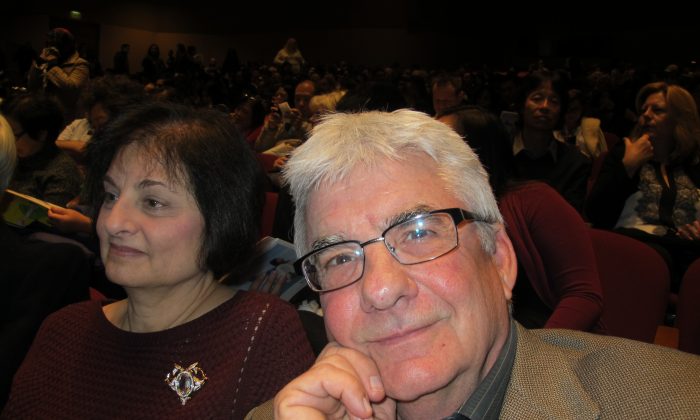 The fashion design of the costumes, in particular, impressed Mr. Duxbury when he watched the performance at the San Jose Center for the Performing Arts on Jan. 2.

“The costumes are incredible,” he said, describing the long silk sleeves worn in some of the dance pieces.

According to Shen Yun’s website, these silken “water sleeves” were worn by women in ancient China to signify humility and grace. When used in classical Chinese dance, the sleeves flow like water and billow around the dancers, following their movements.

“It’s very sophisticated. You can see how much work that goes into it,” Mr. Duxbury said.

New York-based Shen Yun tours the world with the mission of bringing 5,000 years of Chinese culture to life through dance and music.

While Shen Yun specializes in classical Chinese dance, it also includes ethnic and folk dance pieces. Mr. Duxbury appreciated the different styles of dancing, such as the Mongolian ethnic dance “Drums of the Grasslands” and the Tibetan dance “Celebrating the Divine.”

He enjoyed the sophistication as well as the humor found in some of the dance stories. “You can see they’re covering everything,” he said.

“I think you realize, when you see other people’s cultures, that even though the wording is different, there is so much that everybody has around the world,” he said. “The cultures are very similar; presented differently, but if you get to the base of them they’re very similar.”

Mr. Frost was attending Shen Yun for the first time with his companion, Patricia, who bought the tickets as a birthday present for him. “I thought it was very delightful,” he said.

The colors were electrifying.
— Sterling Frost

“I loved the show,” Patricia said. “The colors were electrifying.”

Mr. Frost admired the talent and skill of the dancers as well as Shen Yun’s live orchestra, which combines Eastern and Western musical traditions for a unique and harmonious sound.

He particularly enjoyed seeing the performers interact with Shen Yun’s state-of-the-art digital backdrop, which sets the scene for the dance pieces.

According to the company’s website, “From dusty yellow battlegrounds to tropical beaches to Himalayan peaks to picturesque scenery of the Yellow River Delta—the digital projection infinitely expands and transforms the stage.”

Patricia thought the backdrop was very realistic, as the pair of them had been to China before.

“I’ve never seen [it] done quite this magnificently,” she said.