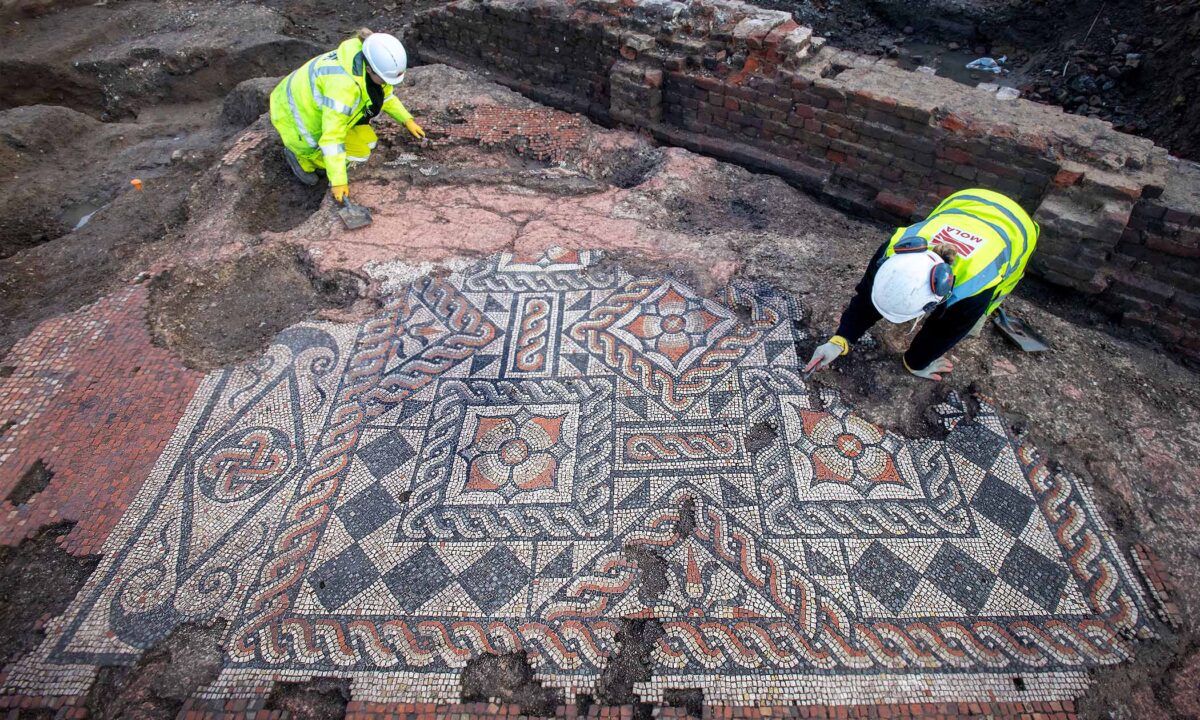 Piercing the soil in the heart of downtown London, a team of archaeologists uncovered Roman artwork from the ancient past, amidst the construction and community developments near The Shard.

The city’s largest Roman mosaic found in 50 years was unearthed as part of a heritage conservation excavation by Museum of London Archaeology (MOLA) archaeologists.

The brightly colored stones of the Roman floor are dated to the late-second to early-third centuries, their designs consisting of two highly decorated panels made of small, colored tiles set within a red tessellated floor, the museum stated in a press release. The largest panel shows large, colorful flowers surrounded by bands of interweaving strands, a motif known as a “guilloche.”

Also featured are lotus flowers and several different geometric elements, including a pattern known as a “Solomon’s Knot.” These particular designs have been attributed to the “Acanthus group,” a team of mosaicists who worked in London and exhibited their own local style at the time.

Styles similar to the smaller of the two panels have been found in Trier, Germany, indicating the same artisans may have traveled between these places to work.

The spectacular mosaic was set in a large room, thought to be a Roman dining room called a triclinium, which would have been furnished with dining couches where stately guests would have reclined and feasted leisurely, while admiring the colorful floor artwork.

“This is a once-in-a-lifetime find in London,” MOLA Site Supervisor Antonietta Lerz said. “It has been a privilege to work on such a large site where the Roman archaeology is largely undisturbed by later activity—when the first flashes of color started to emerge through the soil everyone on site was very excited!”

This dining room might have been part of a mansio, or Roman upmarket “motel,” offering accommodations, stabling, and dining for state couriers and officials traveling to and from London. Given the hall’s lavishness, it was probably patroned by high-ranking officers and their guests.

While the floorplan excavation continues, current findings suggest the building, located on the outskirts of then Roman Londinium, was a very large complex with multiple rooms and corridors surrounding a central courtyard, the press release stated.

A neighboring building was also identified nearby the mansio and likely belonged to a wealthy person or family. Traces of lavishly painted walls, coins, mosaic floor, and decorated bone hairpins attest to a level of affluence shared by those of that era some two millennia ago.

Even more excitingly, traces of an even older floor were found beneath that mosaic, opening up possibilities for future discovery. This bespeaks of refurbishments over the years, perhaps, to make way for new trends in fashion.

In addition, brightly painted fragments believed to be pieces of wall plaster that had crumbled were found in the vicinity.

This spectacular Roman floor will be carefully documented and assessed by expert conservators before being lifted offsite, allowing for more detailed conservation work to take place, and opportunities to investigate surviving traces of the older mosaic.

Below shows an artist’s reconstruction speculating how this mansio and mosaic might have looked some 1,900 years ago: