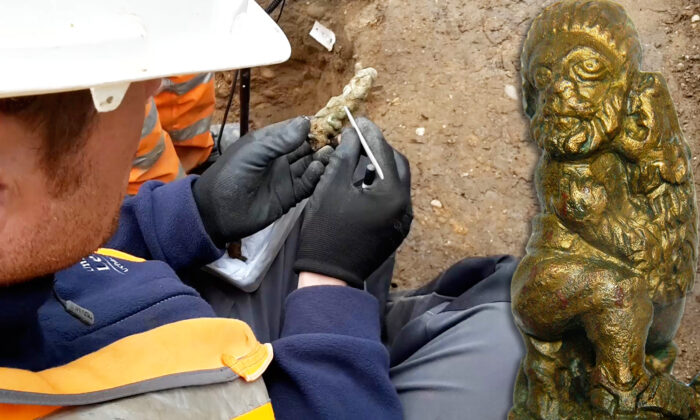 A relic of Roman England’s brutal past was unearthed under the floor of a Roman town house in Leicester—an elaborately decorated bronze handle of a key was found, which depicts a “Barbarian” man being fed live to a lion, with four naked, terrified children huddled below.

Archeologists from University of Leicester Archaeological Services (ULAS) discovered the unique object in the late Roman town house which was excavated in 2016. The bronze handle was studied at King’s College London, and findings have just been published in journal Britannia.

“When first found, it appeared as an indistinguishable bronze object, but after we carefully cleaned off the soil remarkably we revealed several small faces looking back at us, it was absolutely astounding,” Dr. Speed, lead excavator at the site off Great Central Street in Leicester, told the the university.

“Nothing quite like this has been discovered anywhere in the Roman Empire before.”

Study coauthor Dr. John Pearce, from King’s College London, added, “This unique object gives us our most detailed representation of this form of execution found in Roman Britain. As the first discovery of this kind it illuminates the brutal character of Roman authority in this province.”

The bronze artifact depicts a bearded man grappling with a lion which is wrapped around his body and biting his head; underneath, four wide-eyed naked children are depicted gripping each other, the two older ones appearing to be comforting the younger ones, one child appearing to hold a stone.

The harsh penalty of executing criminals and prisoners in the arena in public spectacle was sanctioned under Roman law—defined by the Latin term “damnatio ad bestias,” according to the university.

The key handle is one of the few pieces of direct evidence bespeaking of the harsh penalty faced by those who resisted Roman rule. Another rare example includes the pelvis of a skeleton unearthed at Roman York exhibiting a puncture mark from a toothed animal.

All those tribes who existed outside the dominion of the Roman Empire were collectively regarded as “Barbarians,” and were often depicted by Romans as bearded, wearing trousers, with a naked torso.

Researchers believe the key was likely made a century or more after Britain was conquered by Rome. The university noted with interest that the recent ancestors of those who were once considered Barbarians themselves shared in the Romans’ contempt and fear of those existing outside the Empire.

Roman towns and cities often had amphitheaters or theatres where such displays would be held. Notably, a Roman theatre was recently discovered next to the town house where the bronze key handle was excavated in Leicester.  It is tempting to imagine the owner of this particular bronze handle having witnessed such barbaric spectacles with his own eyes.

Other Roman keys displaying lions have been found in Roman Britain; the beast is believed to be a sign of security for the household, and the objects outlived mere utility, as it was placed upright within the floor as though to offer some form of protection.

This prominent piece of English-Roman history will displayed at Jewry Wall Museum in Leicester once the current major refurbishment is completed in 2023.