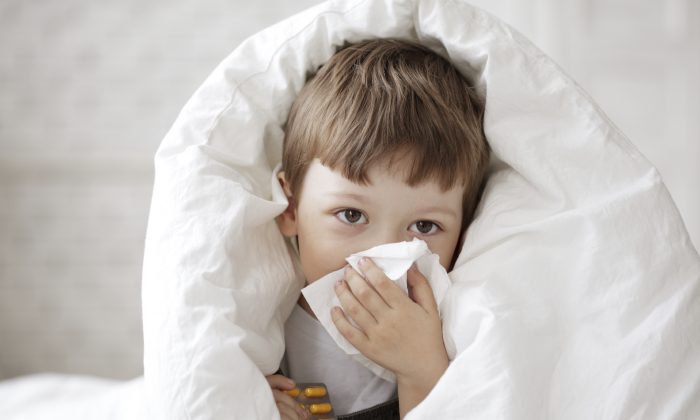 But when we think of antibiotic overuse, we don’t generally think of allergies. Research is beginning to suggest that maybe we should.

In the last two to three decades, immunologists and allergists have noted a dramatic increase in the prevalence of allergies. The American Academy of Asthma, Allergy and Immunology reports that some 40–50 percent of schoolchildren worldwide are sensitized to one or more allergens.

This isn’t just happening in the United States. Other industrialized countries have seen increases as well.

This rise has mirrored the increased use of antibiotics, particularly in children, for common viral infections such as colds and sore throats. Recent studies show that they may be connected.

Antibiotics Can Disrupt the Gut Microbiome

Why would antibiotics, which we use to fight harmful bacteria, wind up making someone more susceptible to an allergy? While antibiotics fight infections, they also reduce the normal bacteria in our gastrointestinal system, the so-called gut microbiome.

Children who grow up on farms have a wider diversity of microbes in their gut and up to 70 percent reduced prevalence of allergies and asthma.

Because of the interplay between gut bacteria and the normal equilibrium of cells of the immune system, the gut microbiome plays an important role in the maturation of the immune response.

When this interaction between bacteria and immune cells does not happen, the immune system responds inappropriately to innocuous substances such as food or components of dust. This can result in the development of potentially fatal allergies.

Research done in Europe has shown that children who grow up on farms have a wider diversity of microbes in their gut and have up to 70 percent reduced prevalence of allergies and asthma compared to children who did not grow up on farms. This is because exposure to such a wide range of microbes allows our immune systems to undergo balanced maturation, thus providing protection against inappropriate immune responses.

In our attempts to prevent infections, we may be setting the stage for our children to developing life-threatening allergies and asthma.

For instance, a study from 2005 found that infants exposed to antibiotics in the first 4–6 months have a 1.3- to 5-fold higher risk of developing allergy. And infants with reduced bacterial diversity, which can occur with antibiotic use, have increased risk of developing eczema.

Finally, in mice studies, offspring of mice treated with antibiotics were shown to have an increased likelihood of developing allergies and asthma.

Why Are Antibiotics Overused?

Health care professionals should not only be concerned about the development of antibiotic resistance, but also the fact that we may be creating another health problem in our patients, and possibly in their children too.

Parents should think carefully about asking physicians for antibiotics in an attempt to treat their children’s common colds and sore throats (or their own), which are often caused by viral infections that don’t respond to them anyway. And doctors should think twice about prescribing antibiotics to treat these illnesses, too.

With New Antibiotics, We Need to Address Overuse

As resistant bacteria become a greater problem, we desperately need to develop new antibiotics. The development process for a new antibiotic takes a considerable amount of time (up to 10 years), and drug companies have previously neglected this area of drug development.

Congress has recognized that antibiotic overuse is a major problem and recently passed the 21st Century Cures bill. This bill includes provisions that would create payment incentives from Medicare for hospitals that use new antibiotics.

But this approach would have the perverse effect of increasing the use of any new antibiotics in our arsenal without regard for whether bacterial resistance has developed. This would not only exacerbate the problem of resistance, but potentially lead to more people developing allergies.

Congress should consider more than just supporting increased development of new antibiotics, but also address the core problem of overuse.

Avery August is a professor of immunology and chair of the department of microbiology and immunology at Cornell University. This article was originally published on The Conversation. Read the original article.