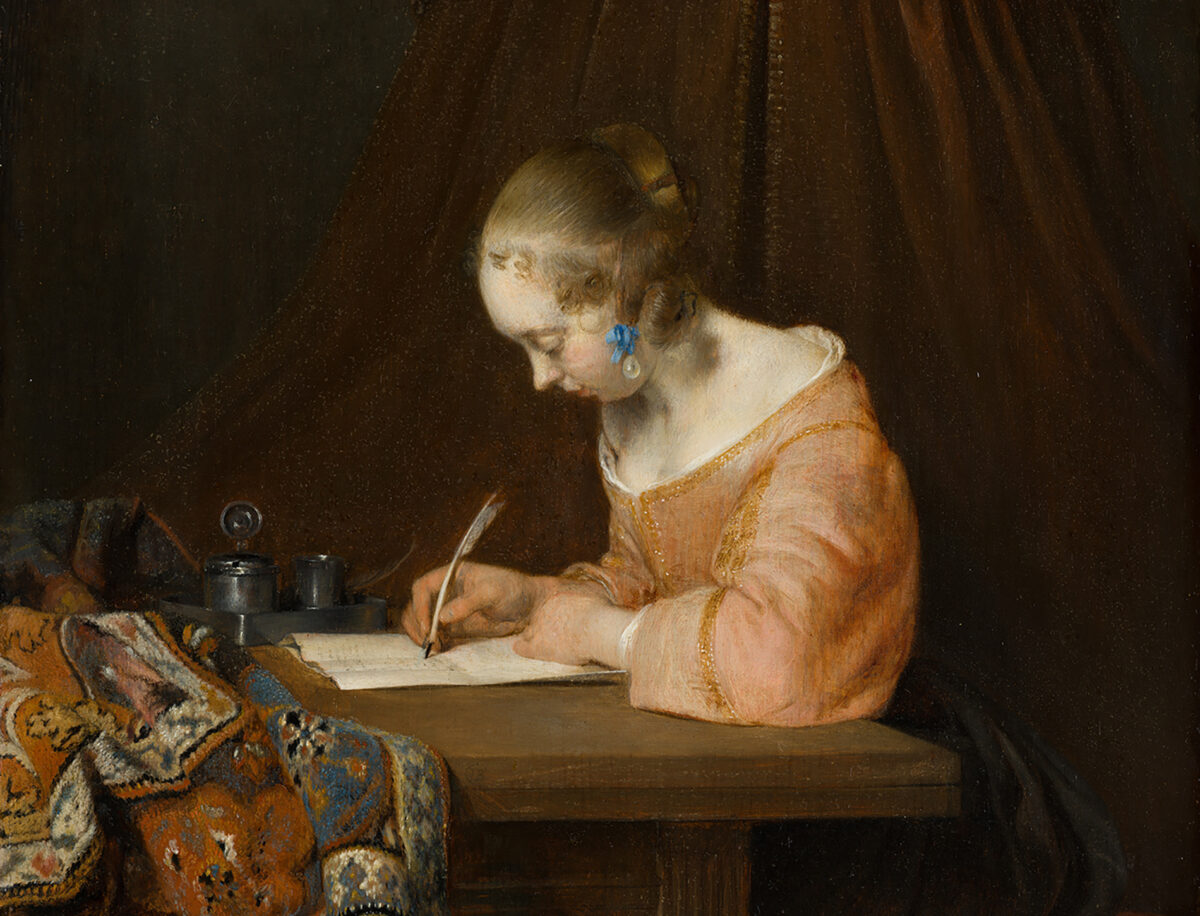 An Exultation of Eloquence: Essays and Elegance

Suppose we took a spectrum of essays and decked them out in clothing that matched their style.

Those pieces that deliver information—an advance in science, an event in history, a critique of some author or a piece of literature—might wear, if personified, a modest coat, slacks, a solidly colored shirt, and tie. If the writer were female, we might expect her prose to appear in a skirt, a matching blouse, and a simple pendant for a necklace. These essays would dress like bankers, doctors, and lawyers.

Opposite these genteel excursions in print are those diatribes that appear frequently online, leaving aside all semblance of civility and screeching one way or the other about politics and the culture. Were we to rig out these rants with appropriate clothing, T-shirts imprinted with slogans or raised fists, frayed jeans, combat boots, and studded leather bracelets would be de rigueur. These pieces are street fighters run riot.

Tell-all personal essays would surely appear garbed (or not so garbed) in beachwear: Speedos for male writers and string bikinis for the females. Like those who appear in these skimpy outfits on the sand at the seashore, the writers of these “let it all hang out” essays, sometimes to their credit (more often to their shame), leave little to the imagination.

Columns offering encouragement might don the clothing that our coaches in high school wore: a polo shirt, lightweight slacks, running shoes, and a whistle about the neck. Those pitching advice and counseling about healthy lifestyle choices would put on casual attire so as to gain our trust: collars open at the throat, discreet shirts or blouses, khaki slacks, and loafers or slightly scuffed shoes.

Which brings us next to the ballroom and the cocktail lounge of the eloquent essay.

In this rarified category, classic black tie accompanied by a martini glass would suit the disquisitions composed by gentlemen. An evening gown or a “little black dress” enhanced by some glittering jewelry and even a tiara would adorn the treatises put together by the ladies. Think Cary Grant in “Notorious” or Audrey Hepburn in “Breakfast at Tiffany’s.”

In this case, eloquent equals elegant.

These essays belong to that subset of culture once called “highbrow.” They are intelligent, scintillating in their word choices and the employment of literary devices, pointed as a rapier in their wit, and often droll but never dull.

Let’s meet three female writers who belong to the Audrey Hepburn school of design and discover how their prose shines and sparkles. Someday we may look at the men who fit this category, but for now, and given the milieu of gentility, it’s ladies first.

The Queen of Etiquette

Years ago, when I was writing occasional pieces for a conservative magazine and wanted to adopt an acerbic but a sort of High Church tone in my style, I often turned for inspiration to one of Judith Martin’s books on manners. Better known as Miss Manners, Ms. Martin (1938–the present) provided the necessary spice and hot sauce my prose required. Ms. Martin’s books, a score or more of them, derive from her years of writing advice columns for newspapers. Here’s just one sample from these compilations, lifted from “Miss Manners’ Guide for the Turn-of-the-Millennium”:

“Even among acquaintances, the deterioration of the dignified and friendly American handshake into promiscuous social kissing annoys Miss Manners for its patently phony show of intimacy. However, being one to yield to acknowledged conventions, rather than to make scenes about abstaining, she did, on later occasions, suffer without protest a public hugging from this gentleman, erroneously implying to onlookers that they were old friends, although they had in fact been introduced only a few minutes previously.”

Note the carefully selected words, the precise punctuation, and the formality. Observe, too, the somewhat old-fashioned rhythm of that second sentence, in which several clauses break the standard rules on brevity taught by journalism and writing manuals.

In short, Miss Martin’s prose is as prim and high-class as her advice on behavior and etiquette.

British writer Alice Thomas Ellis (1932–2005) wrote several novels that were well-received both by the public and by critics, and these are still read today. The columns that she also wrote for “The Spectator,” called “Home Life,” were later collected into four volumes (three of which I own), but unfortunately these are no longer in print.

As the title implies, these short compositions dealt with her life and her home. Though uneven in their subject matter—some of her observations seem trivial, others profound—Ms. Ellis’s prose style offers readers flute after flute of fine champagne. Stiff-lipped, quirky, and with humor as dry as sand, these literary excursions frequently bring both a smile and a nod of recognition to her audience.

In her essay “Drink Up,” for instance, she reports taking one of her children to the doctor about a “verruca,” a malady unknown to me. Although the doctor is treating the child, he senses that Ms. Ellis is unhappy, discovers that she has “sustained a bereavement,” and kindly prescribes some pills for her, which she takes.

“After a week of this I found I could no longer read newsprint, my mouth was as dry as a dog biscuit and every time I stood up I fell over. Vodka never did that to me.”

Note here that Ms. Ellis offers no explanation for “verruca,” which is a plantar’s wart, while her “sustained bereavement” may refer to the death of one of her sons, who at age 19 fell from a roof. In all these essays, she holds her cards close to her chest, sharing as she wishes with the reader but never giving away painful details or sinking into the maudlin.

Ms. Ellis’s restraint is one more mark of an elegant essayist.

The High Road to the Familiar

In her introduction to “At Large and At Small,” Anne Fadiman expresses her hope that she may help revive the familiar essay. “Today’s readers encounter plenty of critical essays (more brain than heart) and plenty of personal—very personal—essays (more heart than brain), but not many familiar essays (equal measures of both).”

And in this book, Ms. Fadiman offers readers 12 compositions that walk hand in hand with this genre under titles like “Mail,” “Procrustes and the Culture Wars,” and “Ice Cream.” To these subjects, she brings erudition by drawing from her vast knowledge of classical literature. From a palette of bold colors, she also paints her prose with wit, personal experience, and examples from history.

Consider this sentence in the first paragraph of “Coffee.” After telling us of sharing coffee with friends as a sophomore in college, she follows with this exquisite sentence, which despite its length deserves inclusion here in full:

“Even though the coffee was canned; even though the milk was stolen from the dining hall and refrigerated on the windowsill of my friends’ dormitory room, where it was diluted by snow and adulterated by soot; even though Alex’s scuzzy one-burner hot plate looked as if it might electrocute us at any moment; and even though we washed our “batterie de cuisine” in the bathroom sink and let it air-dry on a pile of paper towels next to the toilet—even though Dunster F-13 was, in short, not exactly Escoffier’s kitchen, we considered our nightly coffee ritual the very acme and pitch of elegance.”

Once again, we have a writer who assumes that the reader is intelligent to figure out the French and to realize that Dunster F-13 is a dorm room, a woman whose sense of beat and rhythm in her sentences is impeccable, who amuses with high wit rather than low, and who in the remainder of this essay combines such details as a brief history of London’s early coffeehouses and the chemical effects of caffeine with her personal encounters with coffee.

Like the nightly coffee ritual from her college days, Ms. Fadiman’s essay is “the very acme and pitch of elegance.”

Though I take enormous pleasure in reading all sorts of essays, these doyens of the written word hold me, I must confess, in thrall to their talents. If I return to the similes and metaphors introduced in the beginning of my essay, and were my own writing to become so clothed—an outfit consisting of a sweater stretched by usage and peppered with a few moth holes, wrinkled khaki trousers, and canvas shoes—I might kneel in homage to these majesties and pledge my fealty to them as a loyal reader.

Elegance seems to have retired in our time—a casualty, perhaps, of the casual now so much a part of our culture. Yet in their prose, Mses. Martin, Ellis, and Fadiman remind us of its beauty and grace. Subtly, they also whisper to us that this elegance, this beauty and grace, can be ours for the asking.