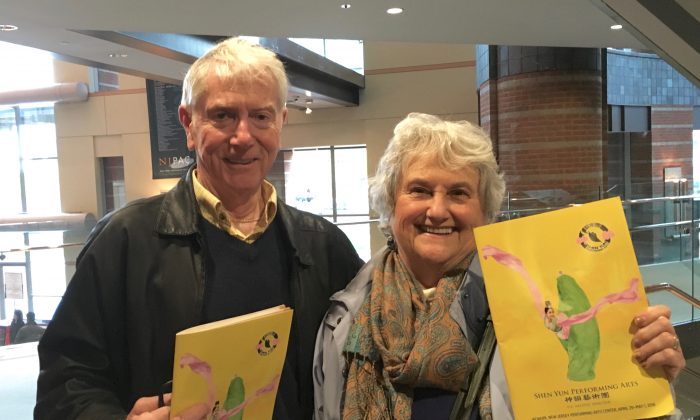 George and Sandy Kenny enjoyed seeing an ancient culture continue through Shen Yun at the NJPAC on May 1, 2016. (Joshua Philipp/Epoch Times)

NEWARK, N.J.—It’s said that 5,000 years ago, the Creator called on divine beings to fulfill their vows, to descend to earth with him to begin dynasty after dynasty, setting the stage for people to one day return to heaven.

That’s how Shen Yun Performing Arts opens, and it is a testament to legacy, according to Sandy Kenny, who attended the matinee at NJPAC on May 1 with her husband, George.

The performance is billed as the revival of 5,000 years of Chinese civilization, where historical accounts and myths and legends play out on stage.

Mrs. Kenny said it’s not just a revival, but a continuation of something that has endured for so long.

“It’s something very ancient that has been handed down, and that’s extraordinary, and it just gives you the sense of continuation of the form and the stories, and that the whole overarching idea is ancient,” Mrs. Kenny said. “I really like that.”

Mrs. Kenny, formerly a writing coach who helped students develop their ideas, said Shen Yun’s idea was so striking to her, and so dramatic.

Also striking was the fact that at the theater on a Sunday afternoon there was a mixed crowd of all ages and ethnicities, rather than the senior crowd the couple jokingly said they more often see. Everyone seemed to be interested in this ancient culture.

As frequent attendees to the performing arts, it was the details that really impressed the couple. Mr. Kenny picked out the footwork, the many scenes shown via an animated backdrop, and the unique instrumentation of the accompanying orchestra to comment on.

They were treated to scenes from “pastoral scenes, the lake, the temple, the palace, vivid colors, cherry blossoms,” and more with the use of a digital backdrop, Mr. Kenny explained, and Shen Yun had used it so well to make people move back and forth between the stage and screen.

He marveled at how such a company had come to fruition, and from whose mind the idea had sprung. To think that there were four companies that, today, tour the world, and each with an orchestra, an ensemble that has accomplished “wedding the Chinese instruments to the European orchestra” in order to create the grandeur and atmosphere it does …

“It gives you an upper,” he said. “It makes you very happy.”