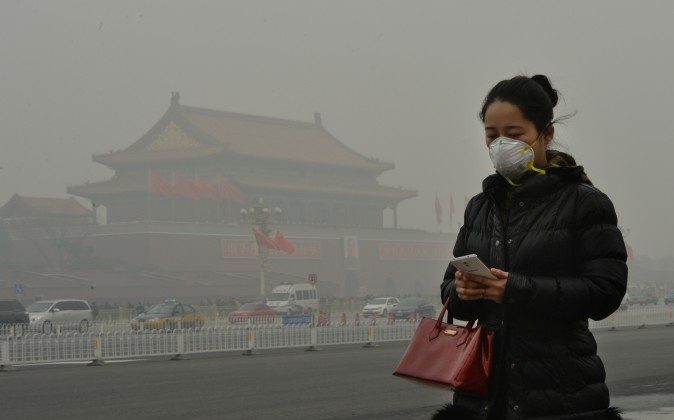 After many days without rain in densely populated places like Los Angeles and New York City, it is sometimes possible to catch a small glimpse of what is an everyday reality for Beijing, China’s 20-some million residents — thick blankets of blackish smog that penetrate the air and fill the lungs of those who breathe it.

Beijing is one of the most air-polluted cities on the planet, so much so that researchers from the Shanghai Academy of Social Sciences declared it to be almost “uninhabitable for human beings” in a recent study. Buildings throughout the city are having to be outfitted with special air purifiers, and schoolchildren are being forced to play sports indoors, underneath special protective inflatable domes.

“It’s a bit of a change having to go through an airlock on the way to class,” stated Travis Washko, director of sports at the British School of Beijing, to The Guardian about some of the new ways the city’s institutions are dealing with the problem. “But the kids love it, and parents can now rest assured their children are playing in a safe environment.”

If it weren’t for the dome, students would be forced outdoors into a thick layer of noxious pollution that almost never subsides. Air pollution has become so dense, in fact, that China’s Center for Disease Control and Prevention estimates that the average 18-year-old Beijing resident will spend about 40 percent of his remaining years in ill health.

Are the People of Beijing Being Deprived of Vitamin D?

All across the city, buildings are being altered to keep people fully confined in hermetically sealed rooms and spaces, with no access to the polluted outside air. But in the process, Beijing residents are being deprived of direct exposure to natural sunlight, which is necessary for the production of vitamin D inside the body.

A study conducted earlier this year on pregnant women in Beijing found that all of them were deficient in vitamin D, the direct result of avoiding time outdoors. Some of the women reported taking vitamin D supplements to counteract the lack of sunlight exposure, but the average amounts they took weren’t enough to bring them into the optimal range.

Since government crackdowns on excessive factory pollution and moderate restrictions on fossil fuel production have done little to address the problem, some scientists and entrepreneurs have proposed more novel mitigatory solutions. One of these involves installing copper wires underground to magnetically attract air pollution, while a nearby city has suggested digging giant ditches in mountainsides to capture pockets of pollution.

Already in play are futuristic weather-modification techniques that China at large is already using to address drought conditions. Recognizing that precipitation tends to capture air pollution and clear it from the skies in a way similar to a vacuum cleaner, the Chinese government has implemented a network of “chemtrail” machinery, including 50 airplanes, that intentionally seed the skies with clouds in order to create fake rain.

“[B]ecause of chronic water shortages, China has invested heavily in artificial rain since the late 1950s,” explains The Guardian. “The country now [boasts] a battery of 7,000 cloud-seeding artillery guns, the same number of launchers for chemical-bearing rockets, and more than 50 planes — all manned by an army of 50,000 employees, ready to launch full-scale warfare on the weather.”