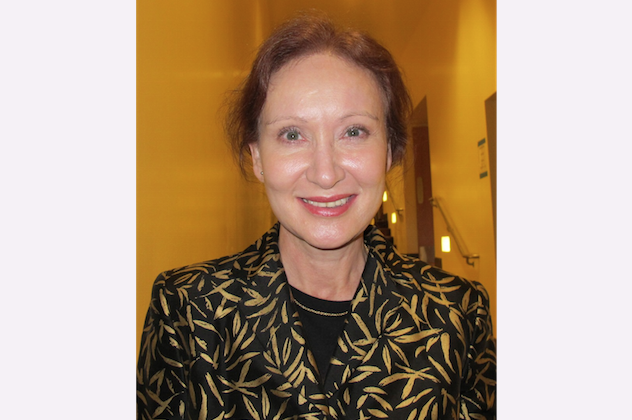 Ms. Doyle is an accomplished actress in both theater and film. Her film and television credits include Independence Day, Tin Cup, and the soap operas Passions, Port Charles, and General Hospital.

“I love it,” said Ms. Doyle, referring to the night’s performance. “I really appreciate the introduction in front of each piece, because that really lends to my enjoyment.”

“And the costumes are fabulous,” she added. “I am just having a wonderful time.”

Established in 2006, New York-based Shen Yun is a non-profit organization dedicated to bringing China’s 5,000 years of divinely inspired culture to life through the performing arts. Shen Yun has reached millions of people across nearly 20 countries and over 100 cities; it is widely recognized as an international phenomenon.

One of Ms. Doyle’s favorite aspects of the show was the interactive backdrop that was used.

“With state-of-the-art graphics technology, Shen Yun’s digital-backdrop team creates vividly animated settings, extending the stage and transporting the audience to a world where heaven and earth are one,” explains the website.

Ms. Doyle said that she came to the show with no expectations. Her open-mindedness seemed to have paid off, as she was able to experience something she considers “absolutely beautiful.”

She also said she would tell people about the show online. “I am going home I am going online and going ‘go,’” she said.

“However many stars is on the top, give it that. Five stars,” said Ms. Doyle. “It’s just beautiful.”

Shen Yun’s New York Company will now be moving on to Los Angeles, for performances over the weekend, March 22 and 23, at the Nokia Theatre.