Actor Moved by Love and Passion in Shen Yun Concert 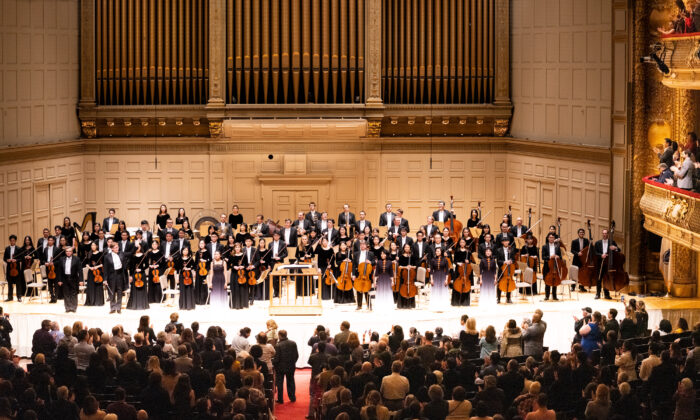 After the final concert, of the Shen Yun Symphony Orchestra's 2019 tour, at the Boston Symphony Hall on Oct. 25, 2019, the audience gave the conductors and musicians a standing ovation. (Dai Bing/The Epoch Times)

BOSTON—Arthur Comegno has plenty of experience being on stage, as a musician, conductor, and actor over most of his life. At his first experience with Shen Yun Symphony Orchestra, he was blown away by the orchestration and emotive effect.

“There were moments I felt that they were flying to the clouds and to the gods at some points, especially with the pizzicato on the string instruments, down looking on horses, on chariots, headed up to the skies,” said Comegno at the Boston Symphony Hall on Oct. 25.

“And then there’s a lot of love, and passion in the music,” he said. “I’m seeing it connected to the universe, to love, to the spirit.”

Comegno is a musicologist and classical violinist himself and performed with the New England Philharmonic previously. Today he acts, directs, and conducts a folk group as well.

Being a musician himself, he said he was deeply interested in what he saw on stage: a vast orchestra unlike what he’d seen before, even before you count in the Chinese instruments like the erhu and pipa.

“The percussion did all these fantastic things and the special Chinese instruments,” he said, wishing he had all the names for the percussion in the back.

“There was people in the back playing blocks, there was timpani, there was snare drum, there was harp, there was cymbals, triangle, there were all these things,” Comegno said.

Shen Yun Symphony Orchestra is known for blending ancient Chinese instruments into a full symphony, as well as playing original works with a distinctly Chinese sound, programmed alongside classical favorites.

“The best thing I can say was it was a fantastic concert and I was amazed and overwhelmed,” he said. “I hope to come back and listen to it again.”

Comegno attended with his friend Kathleen, who had always been interested in Shen Yun, and introduced the concert to her friend.

“The people are inspired,” she said. “It was a lot from the divine.”

The name “Shen Yun” means “the beauty of divine beings dancing,” and the company’s mission has been to revive the once-lost, 5,000 years of divinely inspired Chinese civilization.

“The spirit is moving right through the orchestra. You can feel it. It’s beautiful, meditative, reflective, as well as energizing,” Kathleen said.

The Warners also felt the orchestra lived up to its name—that “divinely inspired” touch came through in the music.

“A lot of beauty, it’s soothing—even though there are a lot of parts that are rapid it’s still a soothing sound and calming,” said Vickie Warner.

Steve Warner was impressed with the dramatic ability of the orchestra and the compositions.

“You can tell a storyline,” he said, referring to the program book where the original pieces are accompanied by a short description of various dynasties or historical stories. “I can listen to the music and then halfway through open up my brochure and say, yes I get that out of it.”

“I’ve heard some music that says it’s supposed to be this or that but it doesn’t even come close,” he said.

Paul Nicholson, from the UK, was fascinated by the stories within the compositions as well.

“The music displays the different things—’Mongolian Spirit,’ you can feel the horses going across the lands. And the story of the man, he kills his daughter with a sword, you can feel that in the music, and you hear him come in,” Nicholson said.

Cindy Null, a piano teacher, attended the Oct. 25 performance with a friend.

“It was very vibrant and energetic and I liked the confluence of Eastern and Western civilizations. I like the idea of including traditional Chinese instruments within a traditional Western orchestra—it’s powerful,” Null said. “It’s got spirit.”

“There’s a great amount of energy and precision in the playing, very impressive playing, especially some of the faster tempi; it was quite something to listen to,” Null said.

Tom and Muriel Prentiss had heard Shen Yun Symphony Orchestra before and loved it so much they brought friends this time.

“Between the sounds and the conductors’ animation, it was just so entertaining. The ears are just enjoying the sounds, and we’re smiling throughout the entire performance, it’s beautiful,” Mrs. Prentiss said. “The choice of music is so different.”

Mr. Prentiss, an engineer, said his mother had been a professional musician, and listening to classical concerts made him feel closer to her.

“I was absolutely amazed. On ‘The Bartered Bride’ there was a whole section that was 64th notes, and I was saying that section would have been so easy to get muddy if they weren’t exactly in sync and it was really well done,” Mr. Prentiss said. “It’s just one of the places where it’s just so obvious how good they were.”

With reporting by Weiya Yang and NTD Television.