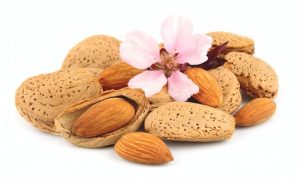 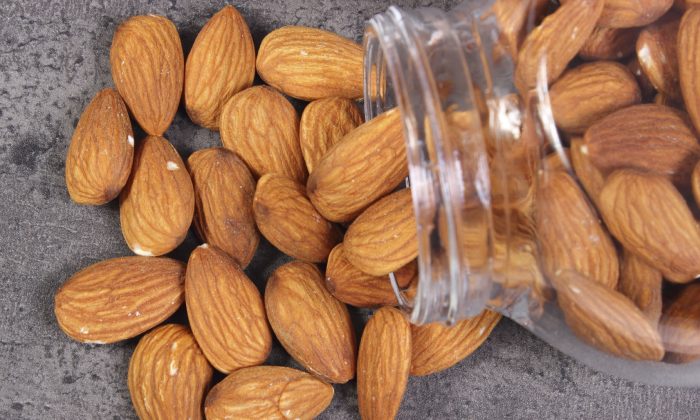 Are almonds safe to eat? (And the question is relevant for the now almost ubiquitous almond milk and almond butter too.) Unfortunately, it seems that the answer is mostly no.

It’s a question that is important to me because now that winter is here, I am making more than ever my batches of dehydrated crackers. Since I gave up eating wheat, my dehydrated crackers serve as a nice substitute for bread. My favorite recipe is for my Rosemary Crackers, for which I use sprouted flaxseeds and sprouted almonds. It is important to sprout raw nuts and seeds by soaking them first.  Nature’s defense mechanisms include nutritional inhibitors and toxic substances: enzyme inhibitors, phytates (phytic acid), polyphenols (also known as tannins), and goitrogens. All these are removed automatically by nature when it rains—the nut or seed gets wet and can then germinate to produce a plant. When we soak our nuts and seeds, we are mimicking nature.

My crackers are delicious, but also extremely healthy. The main ingredients—flaxseeds, almonds and rosemary—are well known to confer many health benefits, including reducing risk of heart disease, cancer, stroke, and diabetes. Flaxseeds are an important part of the Johanna Budwig cancer protocol. The late cancer specialist, Mitch Gaynor, M.D. (a friend and colleague) considered rosemary to be the number one anti-carcinogenic spice, as he stated in all of his speeches. The almonds are, too, an important part of the powerhouse health delivery of the crackers. Just a small handful of almonds provides heart-healthy monounsaturated fat, protein, fiber, potassium, magnesium and iron. Almonds are, as well, the best nut source of Vitamin E.

Of course, I prefer using organic ingredients. Organically grown flaxseeds and rosemary are easy to find, available in most health food stores. The trouble comes only with the almonds. It’s easy to find almonds that are labeled raw and organic. But, the likelihood is, if they are U.S. grown, they are neither. Unfortunately, healthy, raw, organic almonds have become harder and harder to find. In fact, they’re impossible to find unless you know the “secret.”

U.S. grown almonds comprise 80% of the world’s supply. Of these, most come from California. In 2001 and 2004, 33 people fell ill from salmonella outbreaks from almonds (none died). As a response, in 2007, the state of California’s Almond Board, in conjunction with the U.S. Department of Agriculture, proposed an industry-wide “mandatory sterilization” rule for almonds, even those grown organically. The Almond Board declared various methods of pasteurization to be adequate: oil roasting, dry roasting, blanching, steam processing, irradiation, and, rather mystifyingly, the use of propylene oxide (PPO).

There are problems with each of those processes: the first three cook the almonds, causing a reduction of nutrient content. Steaming them, at first blush, sounds like the most innocuous. But, it’s not. In this process, the almonds are exposed to steam for 8 seconds at 210-215 degrees F. For the next 44 seconds, they are moved through a high-heat dehydration tunnel, removing the moisture resulting from the steam. The temperature of the circulating air is 391- 395 degrees F. The almonds themselves reach the temperature of 220 degrees F.

Heating, or pasteurizing, almonds has many deleterious effects. Flavonoids found in their skin are reduced. The reduction of over twenty potent antioxidants is estimated at between 30%-70%. Enzymes are destroyed, vitamin content is diminished, proteins are denatured, beneficial bacteria are killed, and the growth of pathogens is encouraged. As well, heat oxidizes the omega-3 fatty acids in almonds, potentially turning them rotten and creating free radicals that are suspected of playing a role in the development of a host of degenerative medical problems, including cancer. Studies also show that heating almonds creates potentially harmful levels of acrylamide, a byproduct of the amino acid asparagine. Acrylamide is a chemical known to cause cancer, and/or reproductive toxicity leading to birth defects and other manifestations of reproductive harm.

In spite of these adverse results of steaming almonds, the last permissible method of processing almonds is even worse than pasteurization. Propylene Oxide (PPO) is a surface treatment, approved for use on foods since 1958. It is widely used for a variety of foods such as other nuts, cocoa powder and spices.

PPO is classified by the Environmental Protection Agency as a class B2 carcinogen. The EPA website says about PPO:

Dermal contact, even with dilute solutions, has caused skin irritation and necrosis in humans. Propylene oxide is also a mild central nervous system (CNS) depressant in humans…Propylene oxide has been observed to cause tumors at or near the site of administration in rodents, causing forestomach tumors following ingestion via gavage (experimentally placing the chemical in the stomach) and nasal tumors after inhalation exposure. EPA has classified propylene oxide as a Group B2, probable human carcinogen.

PPO is an extremely volatile liquid, previously utilized as a racing fuel…

PPO is an extremely volatile liquid, previously utilized as a racing fuel, but now banned by motorcycle and car racing associations as being too dangerous. It is still used in the making of polyurethane plastics as well as fuel-air bombs.

The EPA attempted to ban the fumigant twice, and, in 1996, was in the process of revoking its “food additive regulation” status. Yet, the agency apparently bowed to protests from the manufacturer, and permitted the permissible status to remain. An allowable residue level of 150 parts per million was set. However, between then and now, that residue allowance doubled to 300 ppm. Canada, which had previously banned PPO use altogether, also set an approved residue level of 300 ppm in 2009 to comply with its “international trade obligations.”

Given the choice of treating their almonds with steam or PPO, non-organic farmers are invariably choosing PPO, as cost has become a significant factor. Steam treatments costs are $2.5 million a year whereas PPO costs are only $500,000. Close to 70 percent of almonds grown in the US are treated with PPO.

Most health food stores claim to sell raw almonds. They can make that claim because there is no labeling requirement. You can’t know if the “raw” almonds have been steamed, or treated with a known carcinogen. If the almonds are U.S. grown, in all likelihood, one or the other of those methods will have been used. Both Whole Foods 365 brand and Trader Joe’s almonds are steam-treated. Blue Diamond sliced and slivered almonds are steam-pasteurized, and its whole-nut “natural” line is treated with PPO. Superior Nut non-organic almonds are fumigated with PPO, but their organic sold in bulk at the company’s website is not fumigated.