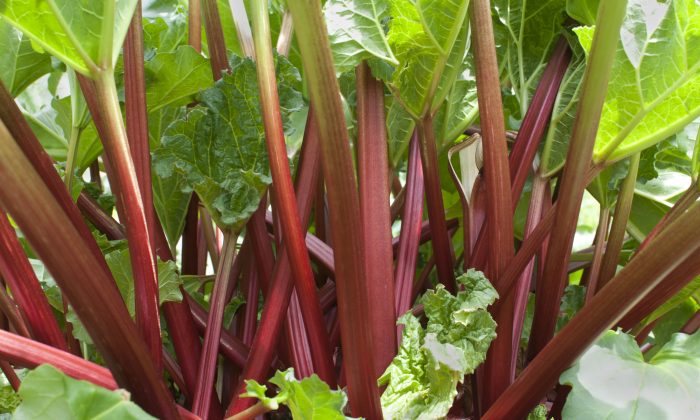 One for constipation, another for pie
By Conan Milner
biggersmaller
Print

Rhubarb is one of the first spring vegetables to pop up. The edible portion of the plant is called a petiole: a thick, red, celery-like stalk. Rhubarb petioles are low in calories, and rich in vitamins and minerals. But they are also exceedingly sour. So how did this tart vegetable become the basis for pie?

Rhubarb was a medicine long before it was considered food. The plant originates from China and Tibet where the root has been used to relieve constipation and other ailments for at least 4,500 years. In Chinese it is called “da huang,” which means “big yellow”—a reference to both the size and power of the rhubarb root.

Ancient Greek doctors were familiar with Chinese rhubarb, but it was the Venetian merchant-explorer Marco Polo who was first to introduce Western Europe to this remarkable medicine. Like other Asian commodities, rhubarb made its way west via Turkish trade routes, which is why it is sometimes called Turkey rhubarb. It has nothing to do with the bird.

By the mid-1600s, the rhubarb trade had become a very lucrative business. At one point, rhubarb cost more than opium. Europeans tried cultivating their own to ensure a domestic supply and avoid the high prices and adulterated specimens that were a product of the Russian rhubarb trade monopoly.

When Scotland, England, and a young United States started growing rhubarb in the late 1700s, interest turned from medicine to sweeter endeavors. Serious Western rhubarb cultivation began about the same time sugar was becoming cheap and plentiful, offering the perfect foil for the super sour petiole. Thanks to sugar, rhubarb stalks became very popular in the 19th century. Cultivars aimed for petioles that were sweeter, juicier, and less fibrous.

American and European rhubarbs are different species than Asian rhubarb. Though the plants look similar, one is made for food and the other is a superior medicine.

Rhubarb is one of the most important herbs in Chinese medicine, and is used to clear the body of excess heat. It is prescribed for fever, profuse sweating, excessive thirst, a distended abdomen, a congested liver, hemorrhoids, menstrual problems, skin eruptions, and painful burning eyes. But rhubarb is best known as a reliable laxative.

Plant chemicals in rhubarb stimulate movement throughout the digestive tract, especially the intestines. But be careful, a little root goes a long way. When Chinese Emperor Wu of the Liang Dynasty was prescribed rhubarb he was warned that the herb should be used with great restraint. Too much rhubarb causes diarrhea, and, paradoxically, can even make constipation worse. Taking the right amount can resolve both issues.

Rhubarb root is a supporting player in many classic Chinese herbal formulas. The presence of other herbs helps cushion rhubarb’s strong purgative effect. Rhubarb may also be taken alone, but only in very small doses. Seek a qualified herbalist for your appropriate dosage.

Pregnant women should avoid rhubarb root because it stimulates the uterus.

Rhubarb pie is the most common application for petioles, but it requires a lot of sugar. While rhubarb stalks are incredibly sour, they need not always be sweetened to be enjoyed.

Thirteenth century Persians and Syrians were the first to eat petioles, but they embraced the tart character rather than trying to mask it with sweetness. Arab cuisine often seeks a sour component, so rhubarb became a soup vegetable and the basis for a savory sauce.

Rhubarb is available frozen, but save this for desserts. Use fresh, crisp petioles as you would celery: in salads, a vegetable stir fry, or as sour crudité for dipping in hummus. Rhubarb can be juiced to take the place of lemon. It also makes a fine tart pickle.

Petioles have a lot of vitamin K, and a substantial amount of vitamins A and C, as well as various B vitamins. They also have a good deal of fiber, calcium, antioxidants, and other beneficial phytonutrients.

Garden variety rhubarb may have some medicinal benefit, too. In a 2006 study published in the journal Menopause, pills made from an extract of the culinary species were found to lessen the number and severity of hot flashes.

Rhubarb leaves are poisonous, though you’d have to eat a lot to die from it. The large leaves contain high amounts of oxalic acid. Many edible plants contain this acid, but the concentration in rhubarb leaves is so great it can cause burning and swelling in the mouth and throat, labored breathing, and vomiting.

Turkey rhubarb is one four herbs in the famous Essiac tea (the others are burdock root, sheep sorrel, and slippery elm). This tea was popularized by Canadian cancer ward nurse Rene Caisse. Caisse claimed it was an ancient formula given to her by the Ojibway Indians who gathered their herbs from the wilds of Ontario. However, Turkey rhubarb was not available in Canada until the 1800s, and then only as an import.

Rhubarb is technically a vegetable, but in the United States it is classified as a fruit. In 1947, a New York court determined that since Americans used it like a fruit (it is sometimes called “pie plant”) it should be regulated as one. This was a win for American consumers buying imported rhubarb, as fruit levies a lighter tariff than a vegetable.