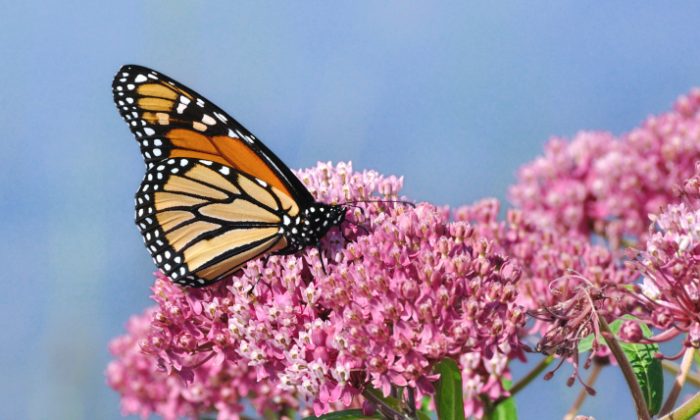 How Your Bedding Could Save Monarch Butterflies

A pillow fight for life
By Christine Chamberlin

Imagine being able to sleep each night knowing your pillow is helping to save threatened species.

Your pillow could protect monarch butterflies if it is filled with Hypodown®, a fluffy mixture of goose down and the silky fibers found in the seed pods of the common milkweed plant.

The relationship between this humble weed and regal butterfly is a fascinating bedtime story.

Milkweed is the sole food source for the monarch caterpillar, which ingests the plant’s milky sap that is poisonous to the monarch’s predators. To many people, however, milkweed is viewed as a nuisance. Farmers put herbicides between the rows of food crops, where milkweed naturally grows, to stop its growth, thereby destroying millions of acres of the plant.

Changes in agricultural land use, drought, and massive fluctuations in temperature have also diminished milkweed habitat. The Midwest milkweed habitat is now virtually gone, having lost 120–150 million acres over the past two decades.

Fewer Monarchs
Without milkweed the monarch butterfly cannot exist, and the loss of milkweed habitat has put the monarch population in jeopardy, dwindling it to the point that the World Wildlife Federation (WWF) has the monarch on their watch list of “near threatened” species.

The number of monarch butterflies hibernating in Mexico, where the butterflies migrate to escape the cold winter, reached an all-time low in 2013, according to data collected by the WWF and Mexico’s National Commission for Protected Areas. Their surveys show that just 1.65 acres of Mexican forest were inhabited by monarchs in December 2013, a 44 percent drop from the same time the previous year, and the smallest area recorded since surveys began in 1993.

Herb Knudsen, president and owner of Monarch Flyway, a manufacturing company located in Ogallala, Neb., the heart of milkweed country, has made it his company’s mission to preserve the monarch butterflies for future generations.

He is doing this by developing products that use milkweed, thereby increasing the demand for the plant and promoting its development as a crop. Monarch Flyway buys harvested milkweed seed pods for their silky fibers, called coma or floss, to produce hypoallergenic down bedding products. Trademarked as Hypodown®, these products are distributed through Monarch Flyway’s subsidiary, Ogallala Comfort Co.

From Oil to Fluff

Knudsen discovered many previously unknown uses of milkweed while working on a project for Standard Oil to find alternative energy resources during the 1970s energy crisis.

Knudsen initiated the Syriaca Project, named after the milkweed’s botanical name, Asclepias syriaca, to research the plant’s alternative energy potential. Knudsen found that crude oil could be extracted from milkweed; however, cultivating the plant is difficult and Standard Oil abandoned the project. Knudsen was convinced the milkweed’s silky fibers could be used in manufacturing consumer products, so he bought the rights to the Syriaca Project.

Knudsen’s hunch was correct, and he found that by adding the silky milkweed fibers to goose down, he could create a hypoallergenic alternative to down that could be used in pillows, comforters, and feather bed-toppers.

Milkweed seed pods suppress allergens found in down that cause allergic reactions, and the insulating quality of these seeds makes Knudsen’s Hypodown® bedding more breathable, durable, and able to regulate body temperature better than down.

Knudsen’s Hypodown® is now the only hypoallergenic down fill product of its kind. His fascination with a humble weed is now saving the fragile milkweed habitat and the monarch butterfly population, so, as with all bedtime stories, this one has a happy ending.

Health Benefits
Milkweed is used by modern herbalists to treat a range of conditions including warts, arthritis, and kidney disorders. Knudsen recently formulated an all-natural, GMO-free, anti-inflammatory, pain-relieving balm derived from the oil of cold-pressed milkweed seeds. Called Milkweed Balm, Knudsen told the Washington Post that he rubs it on his osteoarthritic hip and credits the oil with postponing his hip replacement surgery.

The botanical name for milkweed is Asclepias, named after the ancient Greek god of healing. Milkweed has been used for generations to treat various conditions.

Pioneers used the sap from milkweed as a cure for warts.

Native Americans used the silky fibers from the seed pods to insulate moccasins.

During World War II, the fibers were gathered by school children and used to fill military life jackets.

The survival of monarch butterflies is now dependent upon individuals, companies, and environmental groups that work to stop milkweed destruction, encourage planting, and increase demand for its harvest.

In a memo to business leaders, Taylor said, “Recovery [of the monarch butterfly] will be possible if 1) plans can be implemented to offset the annual losses of milkweed due to development and the expansion of croplands and 2) significant efforts are made to maintain the milkweed corridor that sustains the vast majority of monarchs that reach the overwintering sites in Mexico.”

Christine Chamberlin is a freelance writer and co-founder of The Clean Bedroom, an organic and all natural mattress and bedding retail chain with stores nationwide.