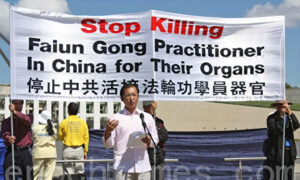 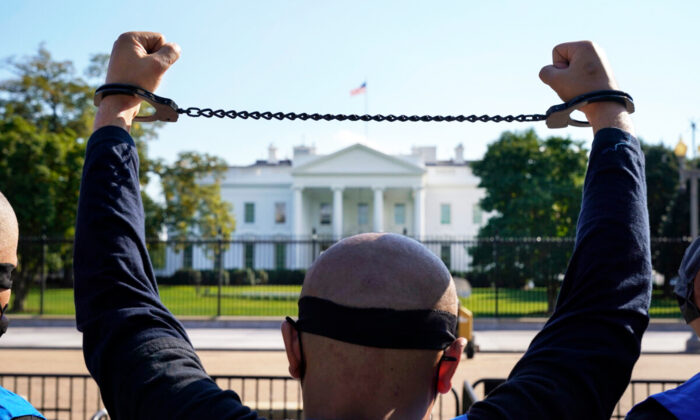 A member of the Uyghur American Association takes part in a rally in front of the White House on Oct. 1, 2020. (Jacquelyn Martin/AP Photo)
People

The world is living right in the middle of two modern-day tragedies: the genocide of Uyghur Muslims and Falun Gong spiritual adherents in China.

Independent investigations and researches have confirmed that the Chinese Communist Party (CCP) has orchestrated twin “crimes against humanity” in the last 20-plus years. Gradually, the world is waking up to the gravity of these human rights violations, which cannot be overlooked any longer.

According to the International Criminal Court: “[T]he crime of genocide is characterized by the specific intent to destroy in whole or in part a national, ethnic, racial or religious group by…causing serious bodily or mental harm to members of the group; [or] deliberately inflicting on the group conditions of life calculated to bring about its physical destruction in whole or in part.”

Since 2017, the Chinese communist regime has significantly scaled up its detention facilities in Xinjiang. Based on the satellite imagery data, researchers at the Australian Strategic Policy Institute (ASPI) have identified and mapped over 380 sites in the detention network across the Xinjiang region.

According to the Council on Foreign Relations (CFR), the communist regime has incarcerated over a million Uyghurs since the year 2017 and has subjected countless others from this ethnic minority to strict surveillance and forced sterilizations.

The CFR reported that although the details of the atrocities unfolding in the Xinjian detention and re-education camps are limited, what those who escaped communist China have revealed is shocking. The detainees who managed to flee China have reported inhumane torture carried out behind the barbed, closed walls of Xinjiang’s detention network.

The detained Uyghur men and women are coerced to renounce their faith in Islam and pledge their loyalty to the CCP. Apart from severe physical and mental persecution, they are also subjected to forced sterilization. Uyghur women have also reported sexual abuse and forced abortions.

In the recent past, the atrocities against Uyghurs have been extensively reported in the international media, leading to the global building up of momentum that can put a check on the CCP’s gross human rights violations.

On Feb. 8, a group of London barristers concluded in their 105-page legal opinion (pdf) that there’s a “very credible case” that the acts carried out by the CCP against the Uyghur people in Xinjiang Uyghur Autonomous Region “amount to crimes against humanity and the crime of genocide.”

The Jewish community who survived the holocaust years ago hasn’t shied away from lending their affirming support to the persecuted Uyghur ethnic minority in China. At the online Holocaust Memorial Day event hosted by the Doughty Street Chambers on Jan. 27, Rabbi Jonathan Wittenberg—a leading writer and thinker who was born to a family of German Jewish origin—recalled how his mother used to wait with fear for the postman to arrive with ashes of deceased family members, reported Bitter Winter.

At the event, Wittenberg spoke to Uyghur exile Ziba Murat, whose mother, a retired medical doctor, has been subjected to a 20-year prison sentence by the CCP. Wittenberg said, “It is the definition of our humanity that we stand up against this.”

Ziba’s mother, Dr. Gulshan Abbas went missing in China in 2018, six days after her sister Rushan Abbas, a founder and chair of Campaign for Uyghurs in Herndon, Virginia, spoke up at the Hudson Institute in Washington. However, only in December 2020 did the family learn from anonymous sources that Gulshan had been given a 20-year sentence in March 2019.

Rushan strongly believes that her sister has been incarcerated by the regime in an attempt to warn others of the catastrophic consequences if they “dare to speak out against the CCP,” reported Bitter Winter.

“[Gulshan] and my aunt were abducted, although they live 1,400 km away from each other,” Rushan said. “This is no coincidence. My sister has committed no fault, and she is being arbitrarily held as a prisoner … A prisoner without a crime. My free speech here in the U.S. has cost my sister’s freedom.”

Urging the international community to take a stand against the CCP, Rushan said: “If a country can imprison family members of foreign citizens, is this really the country you will choose to do business with?”

“To the leaders of the European Union who feel comfortable trusting such a regime, I am holding you responsible for empowering them to commit these genocidal crimes. They are running concentration camps, normalizing slavery, and are punishing my sister for my exercising rights as a foreign citizen. It’s barbaric and brutal beyond words,” she said in a video from Campaign for Uyghurs.

Rahima Mahmut, director of the World Uyghur Congress in London, also spoke at the Doughty Street Chambers event. She drew shocking parallels between the German Nazi holocaust and the CCP’s genocide, according to Bitter Winter.

“The purpose of genocide wherever it occurs is the eradication of the memory of a people from the face of the earth,” Rahima said, adding that Uyghurs sadly have “the terrible honor” of being the victims of China’s technology-backed mass-murder campaign.

“We are not just talking about numbers of people. The Nazi Holocaust was not about the murder of 6 million Jews. It was about one murder, 6 million times.”

After two decades of global efforts to raise awareness, the international community has eventually come forward to speak up against another simmering genocide unfolding on the communist land of China: The persecution of Falun Gong.

Falun Gong, also known as Falun Dafa, is a mind-body cultivation system based on the universal principles of truthfulness, compassion, and tolerance. The peaceful meditation discipline is freely practiced around the world but is being violently persecuted in China since July 1999 after the CCP vilified it as a dangerous “cult.”

According to state estimates, around 70 million to 100 million people were practicing the gentle meditative exercises of Falun Gong in China by the late 1990s. The former leader of the CCP, Jiang Zemin, perceived Falun Gong’s moral presence as a threat to the Party’s communist rule and launched an unprecedented persecutory campaign to eradicate it.

Since then, millions of Falun Gong practitioners have been wrongfully detained, brainwashed, tortured, raped, and even killed for their vital organs for China’s state-run multi-billion-dollar forced organ theft.

Recently, a “top secret” leaked document was obtained by The Epoch Times from a trusted source. The document, which was issued 20 years ago on Nov. 30, 2000, confirms that the CCP “has been abusing the judicial system and manipulating the country’s security apparatus to commit genocide against Falun Gong adherents.”

The document clearly states that the “political and legal departments at all levels must resolutely implement” Jiang Zemin’s “important instructions to eradicate Falun Gong.”

Chinese lawyer Liu Ping (alias), who has defended many Falun Gong adherents in China, told The Epoch Times in a previous interview: “This is a war launched by the CCP against the Falun Gong community using state judicial power!”

“Documents of a legal nature must be publicly announced before they can take effect. The CCP concocts a secret ‘law,’ so how can people comply with it? Therefore, this kind of ‘law’ is a shady means of persecution and shows its illegitimacy,” Liu said.

According to data compiled by Minghui.org, over 4,000 Falun Gong practitioners died due to the CCP’s persecution between 1999 and 2020; however, as the communist regime maintains a tight control and full secrecy over the details of the persecution, tens of thousands of deaths remain unconfirmed.

“The persecution of Falun Gong reaches almost every corner of the country, with deaths confirmed in virtually every one of China’s provinces, autonomous regions, and province-level municipalities,” states Minghui.org.

The report said that over 100,000 Falun Gong adherents have been sentenced to forced labor camps. Several thousand “mentally-healthy practitioners have been locked up in psychiatric hospitals, brutally beaten, and drugged into submission with anti-psychotic drugs.” Countless have been forced into brainwashing sessions to coerce them to renounce their beliefs. Tens of thousands have been detained and imprisoned.

In 2006, two independent Canadian investigators—David Matas, an international human rights lawyer, and David Kilgour, a former Canadian Secretary of State (Asia Pacific) and human rights advocate—published a 46-page report, accompanied by 14 appendices, showing that Falun Gong prisoners of conscience in China are being murdered for their vital organs.

In March 2020, the China Tribunal, an independent tribunal based in London, released a report stating that the CCP continues to kill and sell people for organs. The document also includes hundreds of pages of witness testimonies and submissions. The tribunal chaired by Sir Geoffrey Nice QC reaffirmed the previous conclusions that were made on June 17, 2019.

“Forced organ harvesting has been committed for years throughout China on a significant scale and that Falun Gong practitioners have been one—and probably the main—source of organ supply,” the tribunal said.