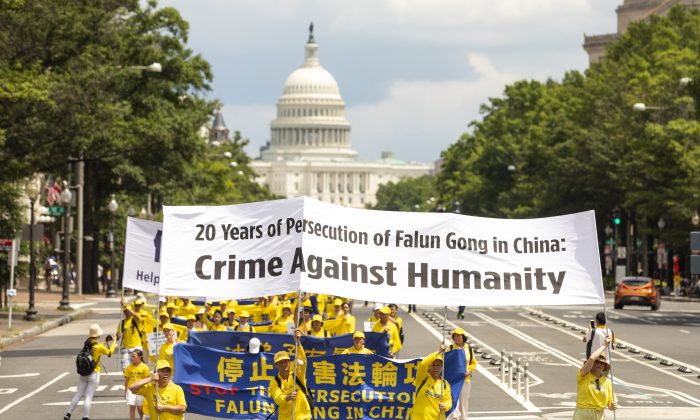 Falun Gong practitioners march from the U.S. Capitol to the Washington Monument commemorating the 20th anniversary of the persecution of Falun Gong in China, in Washington D.C., on July 18, 2019. (Samira Bouaou/The Epoch Times)
By Frank Fang

The Chinese regime continues to kill prisoners of conscience and sell their organs for profit, an independent people’s tribunal based in London said in its final judgment on March 1.

“There is no evidence of the practice having been stopped and the Tribunal is satisfied that it is continuing,” the China Tribunal stated in a 160-page report. The document includes an additional 300 pages of witness testimonies and submissions.

The tribunal was chaired by Sir Geoffrey Nice QC, who previously led the prosecution of former Yugoslav President Slobodan Milosevic for war crimes at the International Criminal Tribunal.

The report states that furthermore, the failure of governments to investigate allegations against China about organ harvesting has allowed “many people to die horribly and unnecessarily.”

The findings reaffirm the tribunal’s previous conclusion, published in June 2019, that adherents of the spiritual practice Falun Gong have been one of the main sources of human organs for transplant under the Chinese regime’s program.

Falun Gong, also known as Falun Dafa, is a spiritual discipline with meditative exercises and moral teachings based on truthfulness, compassion, and forbearance. The practice’s enormous popularity—with 70 million to 100 million followers by the late 1990s, according to official estimates—was deemed as a threat by former Chinese leader Jiang Zemin.

On July 20, 1999, Jiang began a nationwide campaign to round up and throw adherents into prisons, labor camps, brainwashing centers, and psychiatric wards, in an effort to force them to renounce their faith.

Organs harvested from Falun Gong adherents are readily available, based on undercover phone calls to doctors at Chinese transplant hospitals, the report stated. Other phone calls revealed that organ recipients were told the wait time would be about two weeks in China, compared to months or years in countries where legal and transparent organ donations take place.

“It is no longer acceptable for Governments, medical bodies, and leading human rights organizations to say there is not enough evidence. The enormous task of assessing all available evidence has now been completed and is available for all to see,” said Susie Hughes, executive director and co-founder of the advocacy group International Coalition to End Transplant Abuse in China in the statement.

“The time for ignoring the issue has passed. … They are crimes against all of humanity. The next step is for humanity to act.”

The report described forced organ harvesting as the “greatest possible breach of a person’s human rights.” The onus is now on governments to take action against the Chinese regime, the tribunal said.

“[The report] confirms how all people or organizations interacting in any substantial way with the [People’s Republic of China] should recognize that they are interacting with a criminal state,” Nice said in the statement.

People and countries have a “duty” to protect “the right to life,” he added. “This cannot be done by wilful blindness or deafness, pragmatic silence, and inactivity.”

One piece of evidence presented in the report directly implicated former regime leader Jiang, who directly ordered the harvesting of organs from Falun Gong adherents.

“Jiang issued the order [to take organs],” said Bai Shuzhong, a former minister of health for China’s military, when he was questioned by an investigator during an undercover phone call in 2014.

Another evidence of officials’ direct involvement in forced organ harvesting was revealed during an undercover phone call in 2016 with Zhu Jiabin, who was the head of the 610 Office in Mudanjiang, a city in Heilongjiang Province. The 610 Office is a Gestapo-like secret police force that was established expressly to carry out the persecution of Falun Gong adherents.

“I am called the butcher specializing in live organ harvesting. … It’s nothing, just like slaughtering pigs,” Zhu said in the phone call, before adding, “After scooping the organs out, I would sell them.”

All phone calls submitted to the China Tribunal and included within the report have been “individually validated by independent investigators to ensure credibility [of] origin and content,” according to the release.

The tribunal also said it is “convinced that official Chinese transplantation statistics have been falsified,” the report stated, in order to cover up forced organ harvesting.

In 2015, the Chinese regime said it would stop sourcing organs from executed prisoners and rely exclusively on a new voluntary donation system.

In November last year, a study published in the scientific journal BMC Medical Ethics found that “Beijing’s reported organ donation numbers don’t stack up, and there is highly compelling evidence that they are being falsified.”

The study showed that official Chinese figures didn’t appear to be real statistics from donations, but rather data generated using a mathematical equation.