A Message for Shen Yun: ‘We Admire You Very Much’ 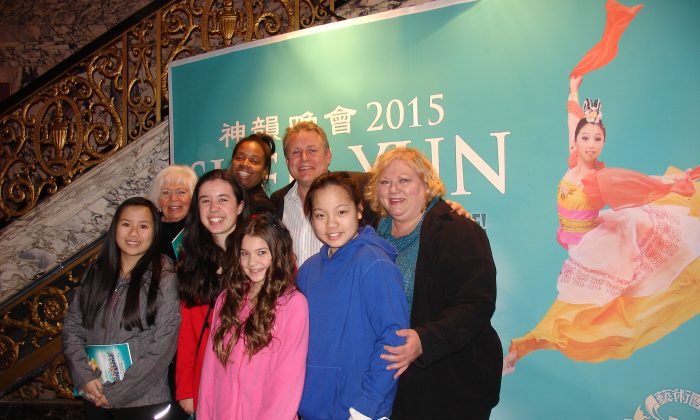 CHICAGO—”I loved it! Absolutely fantastic! Absolutely fantastic! We had a great time!” exclaimed Powers Miller. Seeing Shen Yun at the Cadillac Palace Theatre this weekend satisfied his long-held wish to see the New York-based show. Mr. Miller brought several of his family members and friends with him, eight people in all. “It’s the very first time, I’ve wanted to see it for years,” he said.

In a world filled with negativity he found the show uplifting, and said, “It was positive. There’s a lot of negativity out there, but the whole show is positive.”

According to the company’s website, “Throughout history almost every culture looked toward the divine for inspiration. Art was meant to uplift, bringing joy to both the people who created and experienced it. It is this principle that drives Shen Yun performers and their art.”

Mr. Miller’s mother also found the show beautiful and uplifting and so she was saddened to hear that Shen Yun could not be performed in China. She said, “It makes us feel drawn to the Chinese people.” She added that because of Shen Yun, which showcases classical China’s long held morals and values, “People will see that Chinese people are good.”

“I know that there are people who believe in God in China. I have two granddaughters from China,” she said.

Mrs. Miller said that she experienced the oppression Chinese people live under every day when she traveled there to pick up her two adoptive granddaughters. She said they were under constant police surveillance, “They were watching us, so many of them! We felt intimidated by them. I kept thinking, ‘The Chinese people are not free.'”

She wished to tell the artists, “I’m impressed with the [artists] because I really think they are very brave. They are trying to express what they believe in. I just find that so brave. Would we have the courage to stand up to an oppressive government? Probably not. So we admire you very much. I just think it’s so wonderful that you are doing that. If more people see your show, they will feel drawn to the Chinese people because of you, they will see: these are human beings, good people.”

Accompanying the family was Dorthea Henry, who also saw compassion in the performances. She said, “I just feel compelled to talk about the dance, The Power of Compassion. The police officer was trying to oppress the practitioners [and] … despite the fact that the police officer was trying to stop them, when he was hurt they had great compassion for him. It’s a reminder of how we should treat each other.”

The performance touches upon the persecution of a peaceful meditation discipline, Falun Dafa, which has been repressed in China since 1999.

Mr. Miller found the entire show touching, and in parting said, “The performers, the dancing, and the music was beautiful, too. All of it, the entire performance. First class, first class!”

His mom said, “I loved everything! I’m going to tell my friends that they definitely should go see it.”