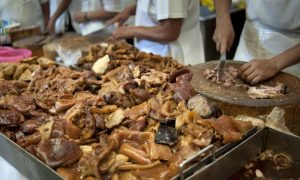 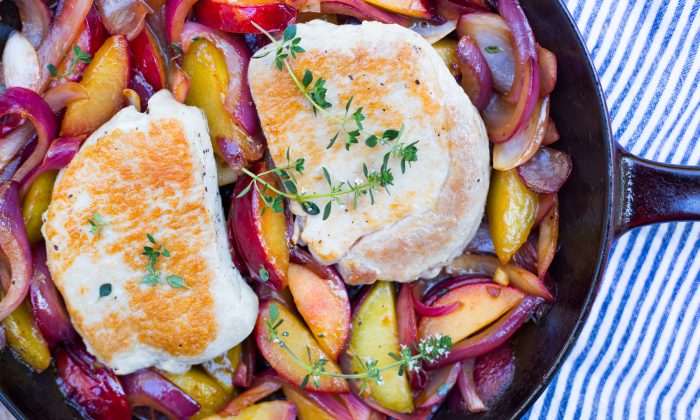 A Meal on the Cusp of Summer and Fall

Everywhere I look, it’s “back to school” this, “back to school” that. Between the grocery store, the doctor’s office, and especially Instagram and Facebook, I can’t go 30 minutes without being reminded that I need to prepare my lunchbox and start sharpening my pencils.

Having no school-aged children myself (my eight-month-old isn’t leaving my side anytime soon!), this jargon falls flat on me. Still, for many of us, the end of summer means getting back into a routine, whether that means ceasing the incessant summer travel, reinforcing bedtimes, or starting to cook more at home.

With the irregularity of summer days, it’s easy to abandon cooking at home in favor of quick bites at the pool, in the park, or on the beach. Seated family meals often fall victim to the spontaneity of a carefree summer.

But when temperatures start to drop, there’s a return to the kitchen, a renewed inspiration to cook nourishing meals to be savored around the table.

There’s plenty of time for hearty stews, casseroles, and slow-cooker meals in late October and November, when you’ve finally broken out all the heavy sweaters and pants that you abandoned in March. But for now, we’re still on the cusp of summer and fall, and these seared pork chops with plums represent that transitional time. Not only does the dish showcase gorgeous late-summer, early-fall plums, but it’s also a one-skillet meal, to help you ease your way back into the season of schedules.

Pork is commonly paired with fruit—think stewed apples or a spiced chutney—because fruit balances the richness of pork so nicely. I play on that age-old pairing here.

I have been buying no less than three pounds of stone fruit, from peaches to plums, per week since they came into season in late July. We’ve been snacking on them and serving them fresh on salads almost every day for months. The changing seasons, however, call for a change of treatment: Here, plums get cooked down with red onions, a squeeze of lime, and a swirl of butter into a jammy accompaniment for pork.

Boneless pork chops are an oft-overlooked, absolutely fantastic cut of meat. They are so easy to cook perfectly, and they’re very lean (less fat than chicken thighs, slightly more than chicken breasts), making them a great alternative to the standard chicken and ground turkey that get a lot of play as easy, healthy weeknight proteins.

Pairing peak-season plums with one of the leanest cuts of pork, you get a cozy meal that’s light enough to enjoy while it still feels like summer on the thermometer.

I was able to buy everything for this meal (minus the salt, pepper, and olive oil) at my favorite local farmers market. I like to season my meat the second I get home with it, which gives it a chance to really absorb the seasoning throughout, and not just on the surface.

With two cooks in the kitchen, no other advance prep work is needed. When George and I cooked this dish together, I chopped the onion, garlic, and plums while he seared the pork. After that, only one cook is required, since the remaining work is simple: saute the onions, add the plums, throw the cooked pork back on top. While one person finishes cooking, the other can set the table, or pour the chef a glass of wine.

All in all, this entire meal comes together in less than 15 minutes from start to finish, and the colors and textures of the final dish will make you look like a Michelin-starred chef. It’s the perfect recipe to reinvigorate your passion for cooking this season.

Season pork chops generously (as in, way more than you think!) with salt and pepper and allow to rest at room temperature for at least 30 minutes.

Heat a 10-inch skillet, preferably cast iron, over medium-high heat for several minutes. Add oil and warm for 30 seconds. Turn on your oven vent—things are about to get smoky! Cook pork chops for 3 minutes per side, or until an instant thermometer registers 135 degrees F. If the sides look pink, use tongs to sear each side for 30 seconds. Transfer pork chops to a holding plate and reduce heat to medium.

When the skillet has cooled for a few minutes, add the second tablespoon of oil, red onion, garlic, and thyme. Season with salt and pepper. Cook for about 5 minutes, stirring often, until the onions are soft but not totally shapeless. Add the plums and cook for 3–4 minutes, until they are soft and warm, but not mushy. Remove skillet from heat and stir in lime juice and butter until melted.

Return the pork chops and any juices that have collected on the plate to the skillet. Garnish with more thyme and serve straight from the skillet.

Bone-in pork chops work great, too, but allow a bit more time to cook them.

If you don’t have fresh thyme, you can sub in 1 teaspoon dried thyme. Have a giant rosemary bush in your yard? Use that instead!

I love this dish on its own, but serve it over brown rice or farro if you need to bulk it up on a hungry night.

This recipe doubles beautifully—just use a 12-inch skillet instead of a 10-inch one.

Use what’s in season, or what you’ve got on hand. Yellow onion will do the trick in place of red, and you can swap any stone fruit that looks great for the plums. Halved figs would also be delicious. When peaches and plums are no longer in season, apples with lemon instead of lime juice are great here, though they’ll take a few more minutes to soften.