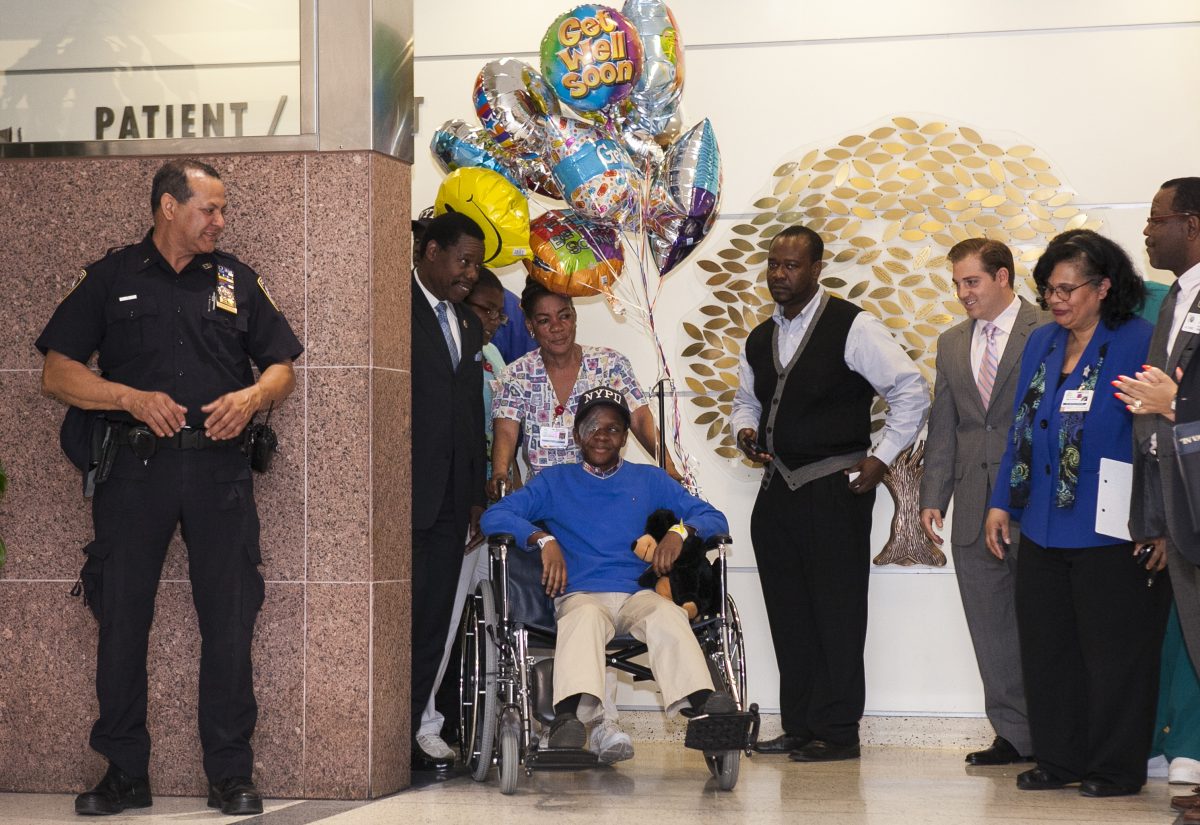 Gama Droiville, a victim of gun violence who got shot in the eye, was released from the Kings County Hospital Center in East Flatbush, Brooklyn, New York April 22, 2014. (Samira Bouaou/Epoch Times)
Health

A Hospital’s Human Touch: Why Taking Care In Discharging A Patient Matters

Patients and their caregivers need better guidance as they transition from hospital to home
BY Judith Graham TIMEJuly 23, 2018 PRINT

The kidney doctor sat next to Judy Garrett’s father, looking into his face, her hand on his arm. ‘There are things I can do for you,’ she told the 87-year-old man, ‘but if I do them I’m not sure you will like me very much.’

The word “death” wasn’t mentioned, but the doctor’s meaning was clear: There was no hope of recovery from kidney failure. Garrett’s father listened quietly. “I want to go home,” he said.

It was a turning point for the man and his family. “This doctor showed us the reality of my father’s condition,” Garrett said, gratefully recalling the physician’s compassion. A month later, her father passed away peacefully at home.

This kind of caring is what older adults want when they become seriously ill and must move back and forth between the hospital and other settings, according to the largest study ever of patients’ and caregivers’ experiences with care transitions.

Two other priorities are also crucially important, according to recently published research: Patients and caregivers want to feel prepared to look after themselves or loved ones when they leave the hospital, and they want to know that their needs will be attended to until they stabilize or recover, however long that takes.

What’s striking is how often hospitals fail to fulfill these expectations, even though it’s been known for decades that care transitions are problematic and strategies to reduce preventable hospital readmissions have been widely adopted.

“Despite millions of dollars of investment and thousands of hours of effort, the health care system still feels very hazardous, unsafe and stressful from the perspective of patients and caregivers,” said Dr. Suzanne Mitchell, assistant professor of family medicine at Boston University School of Medicine and lead author of the new report.

She’s part of a team of experts spearheading Project ACHIEVE, a five-year, $15 million study investigating the effectiveness of interventions designed to improve care transitions. The focus is on what Medicare patients and caregivers need and want when a hospital stay ends and they return home.

One part of the project involves asking people who undergo these transitions—mostly older adults—about their experiences: what went well, what didn’t. In addition to the new report, a survey of more than 9,000 patients and 3,000 caregivers is close to completion. Results will be published this fall.

Another part involves looking at what hospitals are doing to try to improve transitions, such as teaching patients and caregivers how to care for wounds or arranging follow-up phone calls with a nurse, among other strategies. A preliminary research report published last year found common problems with transition programs, including haphazard, uncoordinated approaches and a lack of teamwork and leadership.

Several areas deserve special attention, according to people who participated in focus groups and in-depth interviews for Project ACHIEVE:

Too often, doctors speak to patients and caregivers in “medicalese” and fail to address what patients really want to know—such as “What do I need to do to feel better?”—said Dr. Mark Williams, Project ACHIEVE’s principal investigator and chief transformation and learning officer at the University of Kentucky HealthCare system.

“You really need someone to walk you through what you’re going to need, step by step,” Williams said.

First, her mother needed emergency gastrointestinal surgery, then her father became ill with pneumonia. Both went to an understaffed rehabilitation facility after leaving the hospital, and both bounced right back to the hospital—five times altogether—because of complications.

Each time her parents left the hospital, Brazill felt unprepared.

“You’re out on the concrete of the discharge pavilion and they send you off by ambulance or car without a guidebook, without any sense of what to expect or who to call,” she said.

Ideally, when preparing to release a patient, hospital staff should inquire about older patients’ living circumstances, social support and the help they think they’ll need, and discharge plans should be crafted collaboratively with caregivers.

In May, Art Greenfield, 81, was admitted at 3 a.m. to a hospital near his home in Santa Clarita, Calif., with severe food poisoning and dehydration. Less than six hours later, after a sleepless night, a hospitalist he had never met walked into his room and told him she was sending him home because his situation had stabilized. (Hospitalists are physicians who specialize in caring for people in the hospital.)

“She had no idea if he could pee without the catheter they’d put in or get out of bed on his own,” said Hedy Greenfield, 76, his wife. “I wasn’t there, and no one asked him if there was somebody who could take care of him at home when he got there. Fortunately, he had the presence of mind to say I’m not ready, I need to stay another day.”

Over and over again, patients and caregivers told Project ACHIEVE researchers how important it was to feel that health professionals care about their well-being.

Simple gestures can make a difference. “It’s looking at you, rather than the computer,” said Carol Levine, director of the families and health care project at United Hospital Fund in New York. “It’s knowing your name and giving you a sense of ‘I’m here for you and on your side.’”

Without this sense of caring, patients and caregivers often feel abandoned and lose trust in health care professionals. With it, they feel better able to handle concerns and act on their doctors’ recommendations.

Kathy Rust of Glendale, Calif., remembers walking into a room at an outpatient clinic and seeing a doctor stroking her mother’s hair and calming her before reinserting a feeding tube that the 93-year-old woman had pulled out. “He was making sure she was comfortable,” Rust said, recalling how moved she was by this doctor’s sensitivity.

Few people know what they’ll need in the aftermath of a medical crisis: They want doctors, nurses, pharmacists, social workers or care managers to help them figure that out and devise a practical plan.

Under the CARE Act—now enacted in 36 states, the District of Columbia and Puerto Rico—hospital staff are required to ask patients if they want to identify a caregiver (some choose not to do so) and to educate that caregiver about medical responsibilities they’ll face at home. But implementation has been inconsistent, Levine and other experts said.

Rust panicked the first time her mother’s feeding tube came out, by accident. “I called the transition service at my hospital’s outpatient clinic, and they sent someone over in 30 minutes,” she said. “They were very reassuring that I had done the right thing in calling them, very calming. It was such a positive experience that I wasn’t afraid to contact them with all kinds of questions that came up.”

Too often, however, discharges are hurried and caregivers unaware of what they’ll face at home. Levine tells of an older woman who was handed a pile of paperwork when her husband was being released from the hospital. “She couldn’t read it because she had macular degeneration and no one had thought to ask ‘Do you understand this and do you have any questions?’”

“Patients and families tell us that once they leave the hospital, they don’t know who’s responsible for their care,” said Karen Hirschman, an associate professor and NewCourtland Chair in Health Transitions Research at the University of Pennsylvania School of Nursing.

The name of a person to call with questions would be helpful as would round-the-clock access to emergency assistance—for months if needed.

“It’s not just ‘Now you’re home and we called you a few times to follow up,’” Hirschman said. “It can take much longer for some patients to recover, and they want to know that someone is accountable for their well-being all the way through.”

Judy Garrett found that having cellphone numbers for a home health care nurse and a doctor who made house calls was essential until hospice took over shortly before her father’s death.

“My advice to families is to be physically present as much as possible, although I know that’s not always easy,” she said.

“Appoint one person in the family to be the point person for medical professionals to reach out to. Request cellphone numbers, but use them only when you have to. And if you don’t understand what professionals are telling you, ask until you do.”

Judith Graham is a staff journalist for Kaiser Health News, which originally published this article. KHN’s coverage of these topics is supported by John A. Hartford Foundation, Gordon and Betty Moore Foundation, and The SCAN Foundation.