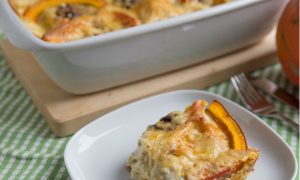 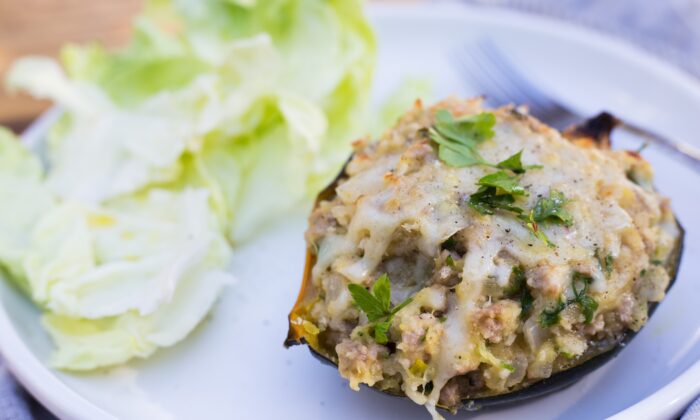 Each person gets an individual squash (or two). (Caroline Chambers)
Recipes

A Cheesy Stuffed Squash Recipe to Put on Repeat This Fall

“I have kale, a few different kinds of squash from Dad’s garden, and some random weird cheeses. What should I make for dinner?”

This is how my conversations with my cousin Marlea typically start. Though Marlea lives in Chattanooga, Tennessee, where my mother and her father grew up together, and I’m across the country in Carmel, California, we keep in near constant communication. We bounce parenting ideas off of each other, we catch up on the rest of the family, and we always, always talk about what’s for dinner.

Marlea is a full-time occupational therapist and mother to two energetic young boys. She and her husband love to eat delicious, healthy-ish food, but are seriously strapped for time. Grocery runs and cook times need to be efficient, and cleanup needs to be pain-free. In other words, they represent a typical young working family in America.

Because of their jam-packed schedules, Marlea has become a master meal planner. She’ll try out a new recipe, and if it meets her standards of efficiency and tastiness, it gets added into her weekly or bi-weekly rotation. She has an arsenal of dishes that she can always turn to and make without even looking at a recipe.

My turkey burgers made it into said rotation this summer, and I received countless photos of her husband Scott grilling them on their Big Green Egg. I may have published a cookbook, and developed recipes for some of the nation’s top magazines and newspapers, but nothing boosts my ego quite like being told that my recipes have made it into a family’s weekly rotation.

Given the nature of my job, I hardly ever repeat recipes, but I love the idea that other people do this: master a recipe and stick to it. My other cousin Lexie is married to a Cajun, and they always have a batch of gumbo or crawfish étouffée in the refrigerator. My sister and her husband make Ottolenghi’s turkey and zucchini meatballs no less than twice a month. My mom regularly makes a huge pot of vegetable curry with whatever’s in her garden, and she and my dad enjoy it for days.

Last fall, Marlea must have made the turkey and cheddar stuffed acorn squash recipe that I developed for another client 25 times, tweaking it and making it her own as she went along, as confident home cooks tend to do. That recipe was simple and delicious, but involved a lot of ingredients—at least 20.

I excitedly called Marlea to let her know that I was about to make her favorite recipe from last fall even easier. She squealed with joy, then quickly hung up on me when her son Thatcher pulled 15 worms out of his pocket and plopped them down on the kitchen counter.

I didn’t even make it home from the farmers market before I started plotting possible flavor combinations for my Stuffed Squash 2.0. A butcher at the Carmel farmers market sells fantastic sausage, so I snatched up a pound of it. Plus, sausage has a large variety of spices in it, so I wouldn’t have to add those spices in as separate ingredients into the recipe. Time-saving win.

I once made a sausage fondue for a Christmas party—sort of a high-brow version of my Southern mother-in-law’s beloved “sausage dip” (Jimmy Dean plus Velveeta cheese)—so I already knew that I loved the pairing of funky gruyere with spicy Italian sausage. Acorn squash has a mild flavor that would allow these bold flavors to shine.

Having to re-stuff the squash after scooping out its roasted flesh is fussier than my recipes usually tend to be, but it’s so worth the minimal extra effort. These are a bit like a healthier, California-fied version of my Southern mother’s classic twice-baked potatoes, where Idaho potatoes are roasted and the flesh is scooped out into a bowl and mixed with sour cream, bacon, cheddar cheese, and chives.

Dividing the dinner duties for this recipe is simple. There are three clear steps: roasting the squash, making the stuffing, and filling the squash.

Whoever gets home from work first can cut the squash in half and throw them in the oven to roast. While the squash roasts, the second cook can tag in to sauté the stuffing of onions, garlic, sausage, and kale. The roasted squash is then scooped out of its shell into the skillet, where it’s mixed together with the sausage stuffing. Scoop the stuffing back into the squash skins, top with cheese, and broil for just a couple minutes to melt the cheese.

Devour them, then check your calendar and find the soonest opportunity to make these for dinner again.

Cut squash in half lengthwise through the stem. Scoop out the seeds and brush the cut sides with 1 tablespoon olive oil. Season with salt and pepper. Place squash cut side down on a baking sheet. Bake for 30 minutes or until tender.

While the squash is roasting, make the filling. Warm remaining 1 tablespoon olive oil in a large skillet. Add the shallot and cook for 4 minutes until soft. Add sausage, garlic, oregano, and garlic powder and cook, breaking up the sausage into small pieces, until sausage is browned, about 3 minutes. Stir in the kale until wilted, 2–3 minutes. Remove skillet from heat and allow to cool slightly.

When the squash is cool enough to handle, scoop out as much as you can while leaving the skin intact. Add the squash, all but a couple tablespoons of Gruyere, and the breadcrumbs to the skillet and stir until combined with the sausage mixture. Season with about 3/4 teaspoon salt and 1/4 teaspoon black pepper. Taste and adjust seasonings as necessary—your sausage may have more or less salt than mine did, so it’s important to taste and adjust for yourself!

Increase the oven heat to broil.

Stuff the mixture carefully back into the squash halves. Sprinkle with the remaining cheese.

Broil squash for 3–5 minutes, until cheese is melted but not browned.

The squash freeze beautifully. To do so, do not broil them after stuffing; instead, allow them to cool completely, then wrap tightly with plastic wrap and freeze. When you’re ready to eat them, unwrap and bake on a baking sheet at 375 degrees F for 30 minutes.

Make this dish gluten-free by removing the breadcrumbs, or using rice crumbs. Already have bread at home? No need to buy panko—just grab the bread in one hand and grate it on a box grater until you have 1/2 cup crumbs.

If you can’t find acorn squash, try using delicata squash, the long, fat ones, instead. You’ll need three delicatas, as they’re a bit smaller than acorn.