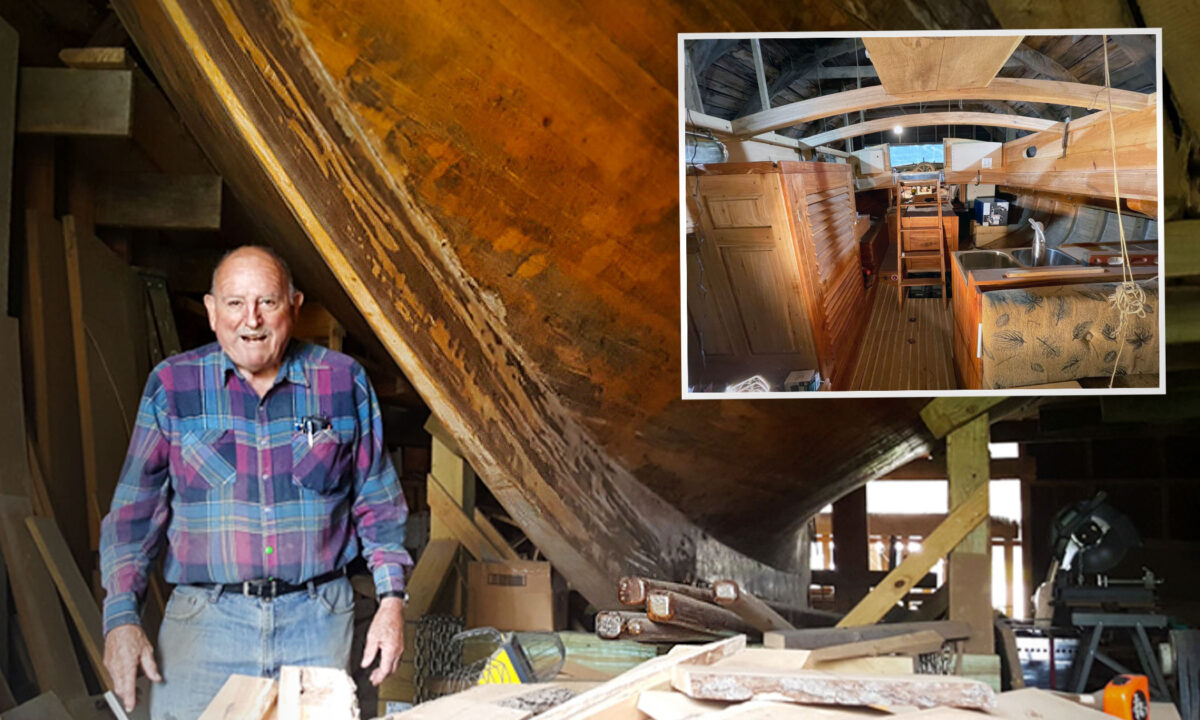 Bill Hable was 47 when he started building himself a boat. Now the former mechanical engineer from Bloomer, Wisconsin, is 84 years old—and still working on it.

The magnificent 41-foot wooden schooner is kept in a large boathouse Hable built at his home. Every week, three days a week, he takes himself into the shed and immerses himself in the mammoth, decades-long project.

So when is it expected to be done?

Talking to the skilled craftsman, it quickly became apparent the appeal of his undertaking lay in the journey, more so than the destination.

“The purpose of it was to get physical exercise,” he said.

In the fall of 1984, Hable was an engineer with a desk job. He worked his way through college helping build and repair boats, and later found himself with 70 acres of land, cutting firewood, and relishing the activity.

“I had always wanted to build a boat, but I never got around to it,” he recalled. “I didn’t get enough exercise, so I said, well, why don’t I build this boat I’ve always dreamed about?”

Hable decided the vessel should be sized within reason, as he hoped to retire free of debt. So on January 4, 1985, he went into his woods and cut down the first trees for his schooner.

Estimated to weigh around 24,000 pounds when it finally hits the water, and holding beds for seven people, the vessel has taken a ton of time and money. When asked how much he has spent on it, Hable shrugs.

“I did not keep track of time, money, or anything else. I’ll tell you why: it’s been worth it and I didn’t want to … I didn’t care,” he said.

Hable and his boat have received a good deal of attention over the decades.

“We’re located right in Bloomer, next to a restaurant and a bar. People come over and talk to me all the time,” he said. “I get visitors from literally all over the world.”

Sometimes, different groups make arrangements to come in, and Hable takes them on a tour.

“I taught at the University of Wisconsin in Eau Claire, for nine years. So I like to teach, and I enjoy doing that,” the engineer explained.

Crediting his education, Hable says he had “a very, very good industrial arts teacher in high school” who taught him woodworking, and some of the skills he still uses today. He also spends a lot of time just figuring things out.

“You spend about a third of your time just thinking about how you’re going to do things,” he told the newspaper.

The most difficult part to build was the frame for the transit. Hable got a stack of books to help him, but says they each gave conflicting advice.

“I did not like any of the answers. So I sat, literally sat and thought for two weeks. And I finally got it built and it came out perfect,” he recalled.

Hable met his wife — who was born in upstate New York and is talented in floral design artwork — while he was at college. But clearly, his sailboat project he prefers to work on solo.

“About 95 percent of the time, it was just me. But for three months in the summertime,” he said. “over three summers, my brother and my cousin would come and help strip-plank the boat. You can’t use epoxy in the wintertime because it’s too cold.”

The ultimate plan, Hable says, is to take the finished item to an island in the middle of the local yacht club, where he already has a 49-foot sailboat.

“That’s where I plan to launch it if I ever get around to it. The work is just taking longer than expected and slowing up a little bit,” he shared.

So what takeaways can this modern-day Noah share from his 37 years of constructing the beautiful-looking boat?

“I think that people should look at exercise as doing something that is useful” he said. If you’re running or walking and all you get is worn down shoes — there’s nothing to show for it.

“You’ve got to be able to think about whether it would be wonderful to do something, something of value,” said Hable. “I tried running and walking and lifting weights and I hated it. So that’s why I decided to build a boat, which I love.”

He added: “I still love doing it. Sometimes I get a little bit bored. But then you get that small increment done and you pat yourself on the back and you go sit at the house and grab a beer.”