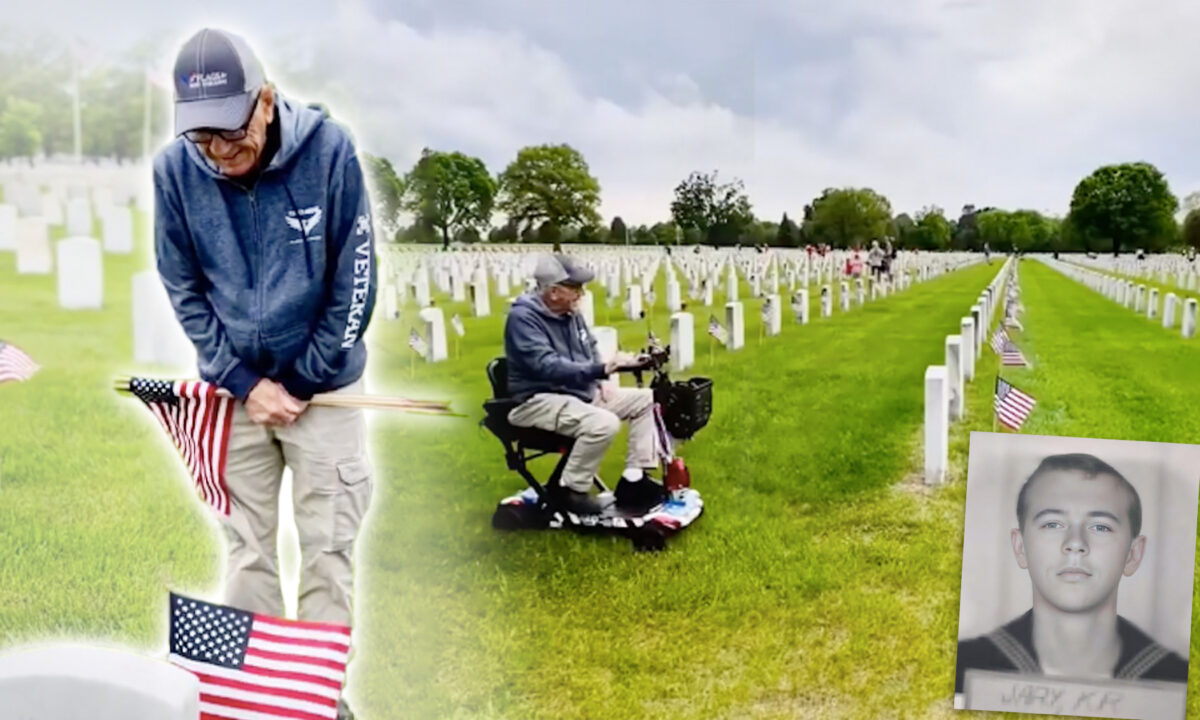 It was a day to look forward to—and definitely one to remember.

Minnesota Navy veteran Kenny Jary teared up when he learned he had snagged a date at Fort Snelling National Cemetery to plant flags before countless rows of headstones, commemorating the fallen heroes of this land on the day before Memorial Day.

Jary served in the U.S. Navy from 1959 to 1963 aboard the USS Okinawa, a helicopter carrier, and that experience made an impression.

“My job was refueling helicopters,” he told The Epoch Times. “It wasn’t bad, but it was stinky, smelly, and loud—the ship. We were in some real rough weather and storms, but outside of that, I loved it.”

That gave Jary opportunities to sail the Atlantic Ocean from Norfolk to the blissful Caribbean for months at a time, of which he has fond memories.

The weather wasn’t quite so balmy on May 29, when he and a few good friends, his “angels,” set out for Snelling with bundles of mini American flags.

“It started off kind of gloomy in the morning—it rained and drizzled,” Jary said. “And then the sun came out, and it was just like angels out of Heaven. It just got so nice.

“It hits home when you see those flags on each grave.”

Having just turned 80, Jary can’t walk like he could in his younger years; so his best bud Amanda got him a scooter for his birthday last January, which they brought to help with flag delivery that day.

Amanda has also made him famous on social media, highlighting his love of country and giving him the handle “Patriotic Kenny” on his very own Instagram, where she posted a clip of her breaking the news of their big, pre-Memorial Day graveyard trip to him and he became “real emotional.” It went viral.

Apparently the flag-planting at the iconic cemetery is a big deal.

“I thought you could just go out here and put up the flags—oh no,” he said. “There’s a list they go by, you gotta sign up, and luckily they picked us. … You can go out to see somebody’s grave, but not to put flags on other graves.”

This was his first jaunt out, and it meant the world to him.

Jary’s scooter didn’t handle the soft grass quite as well as planned, but a little walking when he had to didn’t stop him. They spent more than four hours amid the headstones and put up 200 flags.

Besides his military service, there were other reasons for the patriotic pilgrimage; Jary’s uncle served in the Navy. “He was in during Pearl Harbor,” he said. “He was on a ship, he was on a destroyer, and he was lucky he didn’t get killed.” Jary’s late brother served in Vietnam. Both men were buried in the cemetery.

Patriotic Kenny’s parents, who passed away in their early 60s, are there, too. His dad, Joseph, once guarded German prisoners in the Army during World War II and then returned home to work in construction, Jary said. Joseph and his wife, Janet, who worked at a hotel coat check her whole life, instilled patriotism in their children.

“I was basically raised that way,” said Jary, a middle child. “Being very respectful and to be nice, that comes from my parents.

“Ever since my folks died, my brother, I’ve always wanted to go out there and put flags up. To me, that is such an honor. … I go to Vet’s Park—every day I try to do it and just sit there and meditate, all the ones who lost their lives.”

He lauded his military brothers and sisters and the freedom they afforded us.

“We should be so proud. … I want to pay it forward and do whatever I can for the veterans, everyone,” Jary said. “That’s my goal, pay it forward.”

Born in St. Paul, Minnesota, Jary went from the Navy to working at the Twin Cities Ford plant for 32 years, retiring in 1997. The plant eventually closed in 2011. He’s now long retired, of course, and lives in the beach suburb of Mahtomedi, Minnesota, near White Bear Lake.

He then met Amanda and pals Jerry and Jenny—collectively known as “the crew”—at a local coffee shop; they’ve been hanging out, helping each other out, and partaking in patriotic events ever since. While the VA is good, he said, friends make it better.

“They’re my family, I ‘adopted’ every one of them,” said Jary, who has been cruising his scooter in patriotic parades lately, handing out candy to kids.

What’s next for Kenny Jary and the crew? The Lake Elmo Fourth of July Parade is coming up. Will that make Patriotic Kenny’s Instagram?