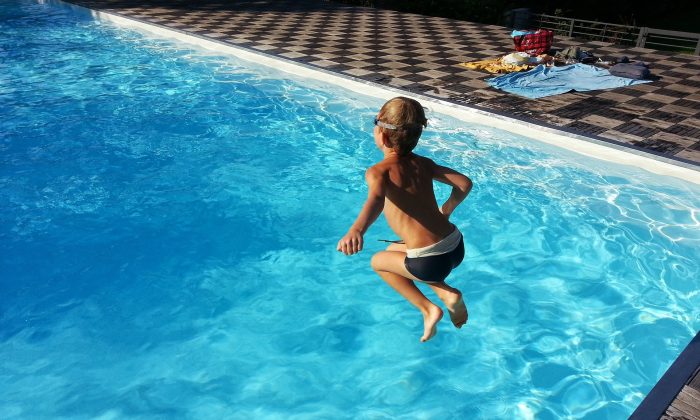 Before you jump in a public pool this summer—make sure you check its violations record.

A new report by the Centers for Disease Control (CDC), released on May 19, shows 80 percent of public aquatic venues had at least one violation when inspected. Almost 13 percent had severe violations that required immediate closure, while 20 percent of children’s wading pools were forced to do the same.

“No one should get sick or hurt when visiting a public pool, hot tub, or water playground,” said Beth Bell, director of CDC’s National Center for Emerging and Zoonotic Infectious Diseases.

“That’s why public health and aquatics professionals work together to improve the operation and maintenance of these public places so people will be healthy and safe when they swim,” Bell said.

Data from inspections through five states from 2013 was used—Arizona, California, Florida, New York, and Texas—according to the Network for Aquatic Facility Inspection Surveillance (NAFIS).

The report’s inspection data focuses on elements considered critical to minimizing the risk for illness and injury linked to pools, like disinfection to prevent transmission of infectious pathogens, safety equipment to rescue distressed bathers, and pool chemical safety.

The data shows disinfectant concentration violations were identified during 11.9 percent of 64,000 routine inspections, which may cause outbreaks of infectious etiology, says the CDC.

Safety equipment violations, which could lead to drowning, were seen in 12.7 percent of more than 61,000 routine inspections.

The report also shows pool chemical safety violations, which can be associated with health problems like respiratory distress or burns, were identified in 4.6 percent of more than 10,000 inspections.

The CDC says dire pool conditions can affect people of all ages, especially young children, who can suffer disabilities or even death. The report shows 1 in 5 kiddie/wading pools were shut down, the highest amount of closures among all inspected facilities.

The CDC released the Model Aquatic Health Code (MACH) in 2014 to give guidance to local and state officials that oversee public aquatic facilities.

For the general public, the CDC suggests swimmers and parents of young swimmers carry out their own brief inspection when visiting public or private pools.

Here is a short and easy checklist that will identify some of the most common health and safety problems, provided by the CDC:

If you find problems, do not get into the water and tell the person in charge so the problems can be fixed. For more information and other healthy and safe swimming steps, visit www.cdc.gov/healthywater/swimming.

Grizzly Bear Does Belly Flop into a Swimming Pool