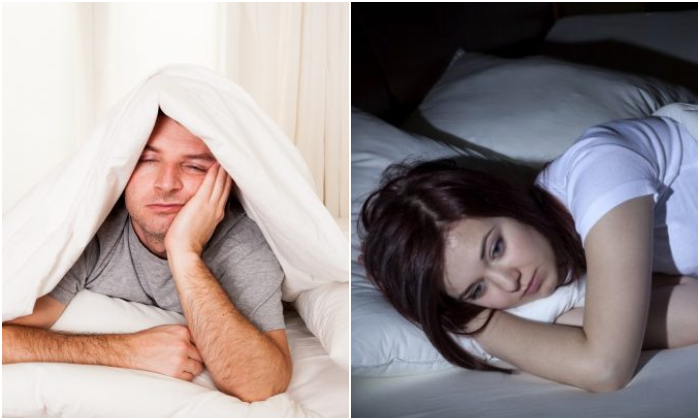 If you can’t remember the last time you got a good night’s sleep, you’re actually not alone. In fact, according to CDC, one in three American adults isn’t getting enough sleep.

Maybe you constantly find yourself wide-eyed at 3 am. Maybe you can’t snooze without the TV on. But no matter how your sleep drama is playing out, chances are there’s one–or more than one–health problem at the root of it.

Here are 8 things your sleep habits can reveal about your health:

1. You’re exhausted when you wake up

Though there are plenty of causes for feeling exhausted even after you’ve got enough hours in bed, your diet could be to blame. Having a meal low in fiber but high in saturated fats and sugar has been shown to lead to more awakenings during sleep, making you feel more tired when you wake.

If you’re able to sleep but still feel tired when you wake up, it’s possible that you have sleep apnea, a problem with breathing during sleep that troubles some estimated 30 million Americans. Sleep apnea messes with your sleep cycles, but you may not remember it happen. Somebody might wake up hundreds of times a night, but think they woke up only once or twice. If you think you might have sleep apnea, try sleeping on your back and see if you feel more refreshed in the morning.

Occasional oversleeping doesn’t really pose any serious health risk. But if you’re consistently sleeping too much, there may be a problem. One possible cause is hypothyroidism, which tends to affect women in their sixties more than other groups.

Hypothyroidism is a deficiency in thyroid hormones that causes metabolism and the body’s many other functions to slow down. This usually means fatigue during the day and poor sleep at night. As a result, some people pay their sleep debt on weekends, sleeping 12 to 15 hours a night to try to store up energy for the rest of the week.

3.You wake up at 3 am no matter what time you went to bed

Sleep drive is part of the circadian rhythm. It increases as the day goes on until we fall asleep and diminishes during the night. So, if you awaken before the sun is up and can’t get back to sleep, you may have simply spent your sleep-drive. There isn’t too much to worry about.

If you’re consistently up too early, however, you may have a circadian disorder called advanced sleep phase syndrome. In this condition, the onset and offset of sleep moves earlier by several hours. If it’s disruptive to social life, it may be treated with the use of properly timed melatonin and light exposure at night.

People who rely on television to lull themselves to sleep are similar to Starbucks regulars who rely on coffee to keep themselves awake: Do it enough times and it’s hard to break the cycle. Falling asleep to TV doesn’t necessarily lower your sleep quality.

If watching TV becomes a part of your nightly routine, however, chances are you’re under too much stress or anxiety that you have to find something to distract you from your own stressful thoughts. When you get in bed, in a room dark and quiet, all the thoughts come rushing back in. Things like heart rate, anxiety, muscle tension will rise as you think about things, preventing you from entering sleep mode. The television helps deflect feelings and compensates for worries.

5. You wake up and can’t fall back to sleep

There are a host of reasons why you might wake up during the night and not be able to get back to sleep. Drinking caffeine or alcohol in the afternoon or evening can prevent you often causes wake-ups later on in the night as your body takes time to metabolize them. A bedroom that’s not dark enough, too noisy, or too warm can result in fitful sleep, too.

If you’re a mid-aged woman and you wake too early and struggle to get back to sleep, a condition called sleep-maintenance insomnia may be to blame. Around 40 million Americans suffering from this type of insomnia, and most of them are elderly women.

6. You wake up to use bathroom so many times

It’s normal to wake up to go to the bathroom occasionally, especially after a late dinner or a few too many drinks before bedtime. But if this becomes too frequent, it could be a sign of underlying health issues.

Frequent urination can a by-product of diabetes, because the kidneys work overtime to absorb and filter out the excess sugar from blood. The kidneys then draw more fluid, increasing bathroom calls at night. This also happen to people with Congestive heart failure. When heart fails to pump blood throughout the body, fluid accumulates in the legs due to gravity during the day. When they lie down at night, this fluid, without the influence of gravity, reenters the blood stream and causes an increase in urine production.

Sometimes our mind simply won’t shut down at night. But consistent insomnia, a rapid heartbeat, and irritability in the night should be seen as a warning of poor heart health. Although scientists have yet to figure out the exact reason behind it, there is a strong association between sleep and heart health.

According to a 2017 study, people who take more than half an hour to fall asleep have a 52 percent increased heart attack risk. This is largely due to the body’s disturbed sympathetic nervous system, whose job is to activate the physiological changes that occur during the body’s fight-or-flight response. Its malfunction could rapidly raise heart rate and blood pressure, increasing strain on the heart.

8. Your leg cramps while you sleep

Up to 60% of adults experience leg cramps at night, according to American Family Physician. A leg cramp can strike when you’re asleep, but it can also occur while you’re lying awake in bed doing nothing. Although the muscle may relax on its own in under 10 minutes, your leg might feel sore or tender for a whole day afterward.

Sitting or lying down for long periods of time can trigger nerve malfunctions in the legs. That’s why we tend to get cramps in the middle of the night. Avoid sleeping in positions where your feet are pointed downward. Sleeping on your back with a pillow behind your knees will allow you to keep your feet and toes straight while you sleep. Also, replace heavy or tightly tucked-in bedding with loose, untucked sheets so your feet won’t be pushed downward.