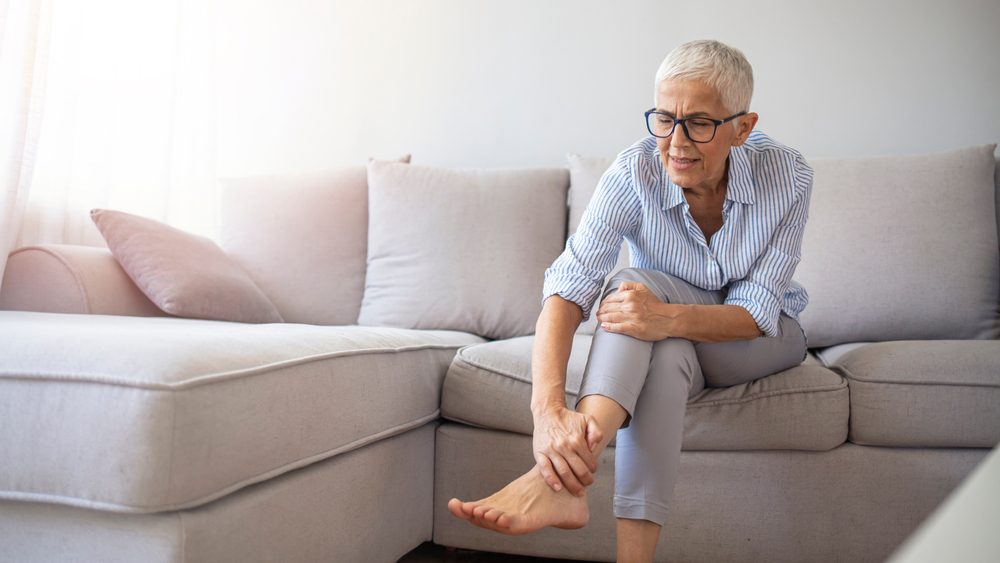 Pain is a common symptom of cancer patients. According to surveys, about 30 percent to 50 percent of cancer patients have pain problems, and more than 80 percent of terminal cancer patients experience pain. Most cancer patients must continually rely on painkillers or morphine. However, even with legal prescriptions, these drugs can bring many uncomfortable and adverse side effects, and over time can even damage the brain, liver, kidneys, gastrointestinal system, and immune system, depriving these patients of their chance to recover. If you are looking for a natural and gentle way to relieve your pain without side effects, there are many natural and non-invasive pain relief remedies that can be alternatives to painkillers.

Mrs. Lee, who’s in her 70s, began to feel pain in her left upper arm several years ago, and her left arm also became less flexible. She applied Chinese herbal creams and medical patches on her arm, but the symptoms wouldn’t go away. One year later, her pain suddenly worsened, extending from her left arm to her back, making it impossible for her to lie down. As a result, she had to sleep sitting up every night. A short while later, Mrs. Lee suddenly coughed up blood, and her husband took her to a major hospital for an examination. A CT scan revealed an 3-inch tumor in her right lung, fluid in her lungs, and signs of cancer metastasis in her liver.

On the same day, Mrs. Lee had a large amount of pleural blood drawn from her lungs at the hospital and took some pain medication home. After the fluid was removed from her lungs, she was able to lie down. However, the pain medication prescribed by the doctor did not completely relieve her pain, and she often felt nausea, dizziness, constipation, loss of appetite, and other side effects.

Mrs. Lee’s son, who had some knowledge of traditional Chinese medicine, knew that taking painkillers was not a long-term solution, so he started looking for other solutions. After some research and exploration, he found out that pressing two acupuncture points could alleviate his mother’s pains. They are the Chize point (LU-5, a he-sea point of the Lung meridian) on her right arm, and the Taichong point (LV-3, the Yuan-source point of the Liver meridian) on her left foot. When she pressed these acupuncture points, she felt a tingling pain at the acupuncture points, but the painful area was immediately relieved, and the pain relief effect would last for several hours.

Later, Mrs. Lee also learned to apply pressure on the acupuncture points by herself. She gradually reduced the amount of pain medication she was taking, and did not suffer a bit for it. At the same time, her son also used hot compresses, foot soaks, and dietary therapies to improve his mother’s physical strength and bowel problems. During the period when she was not receiving medical treatment, Mrs. Lee was able to go for a walk, sunbathe, or practice qigong almost every day.

Many cancer patients who use opioid pain medications gradually become confused, and suffer from indigestion, constipation, urinary retention (inability to empty all the urine from the bladder), and lack of appetite, all of which interfere with the functioning of their internal organs and can significantly reduce the patients’ survival rate.

German cancer specialist Ryke Geerd Hamer pointed out that morphine can completely disable the body’s recovery functions, and that chronically administering morphine to a patient is like chronic murder. It paralyzes the intestines, making it impossible for the patient to digest food. In addition, morphine will disrupt the brain waves of the patient, and cause rapid death once the patient loses the will to live.

Therefore, it is important to avoid over-reliance on drugs and to manage pain properly during cancer treatment. This article will present to you six types of pain relief therapy.

The Yuan Shi Dian Therapy was developed by Dr. Chao-Han Chang, a traditional Chinese medicine practitioner in Taiwan, after years of clinical practice to relieve his patients’ pain.

Mrs. Lee in the first example also used YSD therapy, which was also very effective in her case.

Dr. Chao-Han Chang has written about his therapy in “The Yuan Shi Dian Health Handbook (Chinese edition),” which is available on his foundation’s website for free, and you can learn about acupressure points from a reputable traditional Chinese medicine practitioner.

The anti-cancer effect of vitamin C was proposed in the 1970s by Linus Pauling, a Nobel Prize winner in chemistry, who tested and compared 1,100 cancer patients. It was found that the average survival time of cancer patients treated with high doses of vitamin C (both through intravenous drip infusion and orally) was more than four times that of the control group who did not receive the vitamin C doses. Furthermore, patients who received vitamin C therapy lived more relaxed lives until the end of their lives.

Pauling’s successor, Dr. Hugh Riordan, later demonstrated through additional clinical practice that high doses (several dozen grams at a time) of vitamin C can indeed reduce pain and prolong the life of cancer patients, with some even recovering completely. Dr. Riordan found that when vitamin C is present in extremely high concentrations in the blood, it can kill many types of cancer cells without affecting normal cells.

In recent years, the anti-cancer effects of high doses of vitamin C have also been confirmed by the medical community. For instance, a study published in the journal Cancer Cell in March 2017 showed that patients with lung and brain cancers undergoing chemotherapy were given high doses (80 to 100 grams) of vitamin C intravenously, 2 to 3 times a week, for several consecutive months. As a result, their lives were extended by 4 to 6 months more than expected, with almost no adverse effects.

Currently, high-dose vitamin C injections have not been incorporated into mainstream medical programs, but they are still available in a few medical institutions.

According to the book The Gerson Therapy, coffee enemas originated from World War I. At that time, Germany lacked supplies, but there were countless wounded soldiers without morphine to relieve their pain after surgery. A nurse accidentally discovered that pouring leftover coffee into the enema water could reduce the patients’ pain.

In the 1930s, German doctor Max Gerson began to use coffee enemas to detoxify patients. Later, coffee enemas became an important part of Gerson Therapy, which is used to treat various chronic diseases and cancers. To date, Gerson Therapy has been used in society for nearly a century. Dr. Gerson’s clinical findings show that many patients’ pain gradually disappeared after a coffee enema, eliminating the need for painkillers, and the effect could last for four to eight hours. Severely ill patients can eventually stop taking pain medication if they increase the frequency of enemas.

Australian veterinary surgeon Ian Gawler, author of the best-seller “You Can Conquer Cancer,” wrote he had the “most painful” cancer of all: malignant osteosarcoma. And less than a year after his right leg was amputated, the cancer recurred, and he was pronounced incurable by his doctors. So he used coffee enemas to detoxify his body and relieve his pain. He later said, “When I was feeling pain in the past, coffee enemas were more effective than anesthesia or painkillers.” Gawler later relied on Gerson Therapy, emotional management, and meditation to heal himself, and lived another 40 years.

According to Gerson, coffee enemas not only relieve pain, but also stimulate liver detoxification, reduce serum toxins, and metabolize tumor breakdown products. Cancer patients are encouraged to consult with a “Dr. Gerson” who is licensed by the Gerson Institute or an experienced professional before having a coffee enema.

Far infrared is a type of low-frequency infrared light (invisible light), and far infrared with wavelengths between 6 and 14 microns is particularly beneficial to human health. It penetrates deeply into the body, resonates with cellular molecules, and produces a warming effect. Its health benefits include anti-inflammation, detoxification, pain relief, blood circulation promotion, metabolism acceleration, and immunity enhancement.

If a patient is physically able, he or she can stand on a small trampoline and bounce gently several times a day, a dozen times each session, to promote lymphatic circulation, remove toxins from the body, and relieve pain.

Dr. Ding Yi Yang, chair of Chang Gung University in Taiwan, believes the lymphatic system is the body’s largest detoxification system and the most important immune defense system, and that bouncing on a trampoline is a convenient lymphatic health exercise.

Zhengchun Sun, whose cancer-fighting story was detailed in the book “Walking Brings Me Back to Life,” had suffered from cancer and many other chronic illnesses. He eventually cured his cancer and illnesses by walking barefoot every day.

At the age of 43, Sun was diagnosed with submaxillary and lymphatic malignant tumors. He didn’t even dare to tell his wife. For a week after he left the hospital, he was in a daze, walking around barefoot in the fields. However, the more he walked, the more awake he became. So Sun began to walk barefoot for 12 kilometers in the mountains to work, spending sometimes six hours a day back and forth. After three months of walking, he went back to the hospital for a checkup, and the tumors had disappeared, and his 16 chronic diseases (including cramps, stomach ulcers, irregular heartbeat, and diabetes) had also improved.

From a biochemical point of view, when the body becomes inflamed, free radicals (a type of positively charged molecules) are produced in the body. If there are too many free radicals, and the body cannot eliminate them in a timely manner, they will seize the electrons from neighboring healthy cells, triggering a series of inflammation, like a chain reaction, resulting in chronic inflammation. When the body comes into contact with the ground, free electrons from the earth come into the body and combine with the harmful free radicals, neutralizing their electrical properties and ending the inflammation.

At the physical level, the human body has a natural bioelectromagnetic field (bioelectricity). When the bioelectricity is disturbed by the internal environment (e.g. poor circulation or poor metabolism) or the external environment (e.g. static electricity, alternating currents, or radiation), the body is prone to inflammation or other diseases. When the body is connected to the earth, unbalanced electrical currents are discharged into the earth. At this moment, the human body is neutral (with zero electric potential), and it is in its most natural state of healing.

The book “Earthing: The Most Important Health Discovery Ever” tells the story of a woman with rheumatoid arthritis, whose knees were so swollen and in so much pain she could barely move them. One day, she went to a seminar on earthing and immediately decided to give it a try. Within three weeks, her pain and swelling were gone, and she could walk, exercise, and climb up and down stairs again.

The health benefits of earthing are directly proportional to its duration. The more severe the ailment, the longer the need for earthing. In general, it’s best to do earthing two to three times a day for about half an hour each time. The methods are as follows:

Correction: The article and headline initially proposed 8 ways to treat pain. The article has since been divided into parts 1 and 2, and this article now contains 6 methods of pain relief.