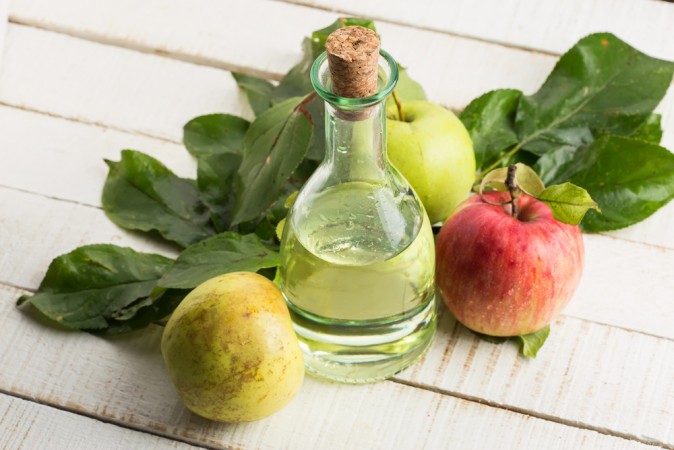 I was first introduced to apple cider vinegar (ACV for short) several years ago after reading in a magazine that Fergie (Black Eyed Peas, not Duchess of York) takes a couple of teaspoons each day to assist weight loss. A body like Fergie by drinking apple cider vinegar? That is one bandwagon I was quick to jump on. While I’m still waiting for Fergie-like abs, I have been reaping the many other health benefits associated with including a little ACV in my diet. ACV has been touted for it many medicinal properties for yonks and it really is a cure-all remedy.

These are just a few benefits of apple cider vinegar …

Apple cider vinegar may aid in weight loss by stabilising the blood sugar for a longer period and helping to control the appetite. Try taking 1-2 teaspoons in water before each meal. This little trick may also help with diabetes. Don’t just rely on ACV to help you trim down though. It won’t work if your diet is rubbish. ACV should be an accompaniment to a healthy, balanced diet.

3. To Help With Digestion

Aiding digestion is possibly one of apple cider vinegar’s biggest claims to fame. It can help with common indigestion and gastrointestinal discomfort caused by certain foods and it is said to clear up chronic acid reflux when taken religiously with each meal.

Apple cider vinegar can be used as a topical astringent for acne prone skin, and some even report that taking ACV orally every day has helped clear their skin. Add a cup of apple cider vinegar and a cup of Epsom salts to a hot bath to draw toxins out through the skin and help jumpstart the cleansing process. This can also help relieve joint pain as well as skin conditions like eczema and acne.

Try this for a home wart removal remedy: Soak a cotton ball with apple cider vinegar and attach it to the wart site with a bandaid. Leave overnight. Repeat each night until the wart disappears.

Apple cider vinegar devotees claim that this miracle elixir is one of the main reasons they are able to ward of common illnesses. This can most likely be chalked up to ACV’s unique blend of vitamins, minerals and enzymes. It also possesses antimicrobial and antiseptic properties.

7. For Soft and Shiny Hair

Acetic acid, the main ingredient in ACV, will remove build up from styling products and conditioners and strengthen the hair shaft, leaving you with soft, shiny strands. It will also balance hair’s pH level, kill bacteria, and is a cure for dandruff.

Dilute 1/3 cup ACV in 4 cups of water and pour over your hair after shampooing. Leave it in for a few seconds before rinse your hair using cold water to seal the hair shaft and create more shine. Because vinegar is acidic, using the rinse daily is not advised. And no, your hair won’t stink like vinegar – the smell will go away after your hair dries.

How to Take It Orally…

Add 1-3 teaspoons of apple cider vinegar to a glass of warm or cool water before each meal. You can also add it to hot water with a little honey and drink it as a tea. Apple cider vinegar is also great as a salad dressing when mixed with flaxseed oil and honey.

It’s important to buy an apple cider vinegar that is organic and unfiltered so that all of its nutritional value is in tact. The Bragg’s brand is great. The hazy looking stuff that settles to the bottom is called “the mother” and it is said to be the most nutritious part of the apple cider vinegar for its therapeutic benefits.