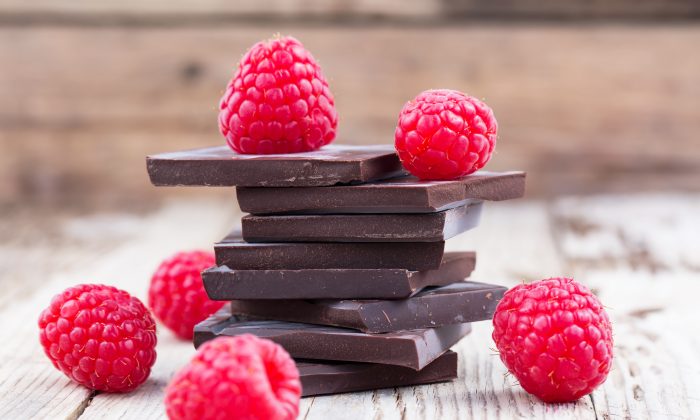 7 Proven Health Benefits of Dark Chocolate (No. 5 is Best)

Dark chocolate is loaded with nutrients that can positively affect your health.

Made from the seed of the cocoa tree, it is one of the best sources of antioxidants on the planet.

Studies show that dark chocolate (not the sugary crap) can improve health and lower the risk of heart disease.

If you buy quality dark chocolate with a high cocoa content, then it is actually quite nutritious.

It contains a decent amount of soluble fiber and is loaded with minerals.

Of course, 100 grams (3.5 ounces) is a fairly large amount and not something you should be consuming daily. All these nutrients also come with 600 calories and moderate amounts of sugar.

For this reason, dark chocolate is best consumed in moderation.

The fatty acid profile of cocoa and dark chocolate is excellent. The fats are mostly saturated and monounsaturated, with small amounts of polyunsaturates.

It also contains stimulants like caffeine and theobromine, but is unlikely to keep you awake at night as the amount of caffeine is very small compared to coffee.

2. Dark Chocolate is a Powerful Source of Antioxidants

Have you ever heard of a measure called ORAC?

ORAC stands for Oxygen Radical Absorbance Capacity. It is a measure of the antioxidant activity of foods.

Basically, researchers pit a bunch of free radicals (bad) against a sample of food and see how well the antioxidants in the food can “disarm” them.

The biological relevance of this metric is questioned, because it’s done in a test tube and may not have the same effect in the body.

Cocoa and dark chocolate have a wide variety of powerful antioxidants, way more than most other foods.

However, I think it is worth mentioning that raw, unprocessed cocoa beans are among the highest scoring foods that have been tested.

Dark chocolate is loaded with organic compounds that are biologically active and function as antioxidants. These include polyphenols, flavanols, catechins, among others.

One study showed that cocoa and dark chocolate contained more antioxidant activity, polyphenols and flavanols than other fruits they tested, which included blueberries and Acai berries.

Bottom Line: Cocoa and dark chocolate have a wide variety of powerful antioxidants, way more than most other foods.

The flavanols in dark chocolate can stimulate the endothelium, the lining of arteries, to produce Nitric Oxide (NO), which is a gas.

One of the functions of NO is to send signals to the arteries to relax, which lowers resistance to blood flow and therefore reduces blood pressure.

There are many controlled trials showing that cocoa and dark chocolate can improve blood flow and lower blood pressure, but the effects are usually mild.

However, there is also one study in people with elevated blood pressure that showed no effect, so take all this with a grain of salt.

Bottom Line: The bioactive compounds in cocoa can improve blood flow in the arteries and cause a small but statistically significant decrease in blood pressure.

In a controlled trial, cocoa powder was found to significantly decrease oxidized LDL cholesterol in men.

It also increased HDL and lowered total LDL in men with elevated cholesterol.

Oxidized LDL means that the LDL (“bad” cholesterol) has reacted with free radicals.

This makes the LDL particle itself reactive and capable of damaging other tissues… such as the lining of the arteries in your heart.

It makes perfect sense that cocoa lowers oxidized LDL. It contains an abundance of powerful antioxidants that do make it into the bloodstream and protect lipoproteins against oxidative damage.

Dark chocolate can also reduce insulin resistance, which is another common risk factor for many diseases like heart disease and diabetes.

5. Dark Chocolate May Lower The Risk of Cardiovascular Disease

It turns out that we have several long-term observational studies that show a fairly drastic improvement.

In a study of 470 elderly men, cocoa was found to reduce the risk of cardiovascular death by a whopping 50% over a 15 year period.

Another study revealed that eating chocolate 2 or more times per week lowered the risk of having calcified plaque in the arteries by 32%. Eating chocolate less frequently had no effect.

Yet another study showed that chocolate 5+ times per week lowered the risk of cardiovascular disease by 57%.

Of course, these 3 studies are so-called observational studies that can not prove that it was the chocolate that caused the reduction in risk.

However, given that we have a biological mechanism (lower blood pressure and oxidized LDL) then I find it plausible that regular consumption of dark chocolate can in fact reduce the risk of heart disease.

Bottom Line: Observational studies show a drastic reduction in heart disease risk for the people who consume the most chocolate.

6. Dark Chocolate May Protect Your Skin Against The Sun

The bioactive compounds in dark chocolate may also be great for your skin.

The flavonols can protect against sun-induced damage, improve blood flow to the skin and increase skin density and hydration.

The minimal erythemal dose (MED) is the minimum amount of UVB rays required to cause redness in the skin, 24 hours after exposure.

In one study of 30 people, the MED more than doubled after consuming dark chocolate high in flavanols for 12 weeks.

If you’re planning on a beach vacation, consider loading up on dark chocolate in the prior weeks and months.

Bottom Line: Studies show that the flavanols from cocoa can improve blood flow to the skin and protect it against sun-induced damage.

The good news isn’t over yet. Dark chocolate may also improve the function of the brain.

One study of healthy volunteers showed that 5 days of consuming high-flavanol cocoa improved blood flow to the brain.

Cocoa also contains stimulant substances like caffeine and theobromine, which may be a key reason cocoa can improve brain function in the short term.

There is considerable evidence that cocoa can provide powerful health benefits, being especially protective against cardiovascular disease.

But of course, this doesn’t mean people should go all out and consume lots of chocolate every day. It is still loaded with calories and easy to overeat on. Maybe have a square or two after dinner and try to really savor them.

Be aware that a lot of the chocolate on the market is crap. You need to choose quality stuff… organic, dark chocolate with 70% or higher cocoa content.

Dark chocolates often contain some sugar, but the amounts are usually small and the darker the chocolate, the less sugar it will contain.

There are of course other benefits to chocolate that I have not mentioned… such as the awesome taste.