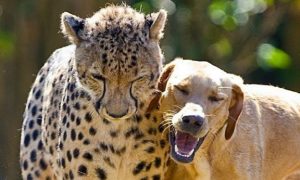 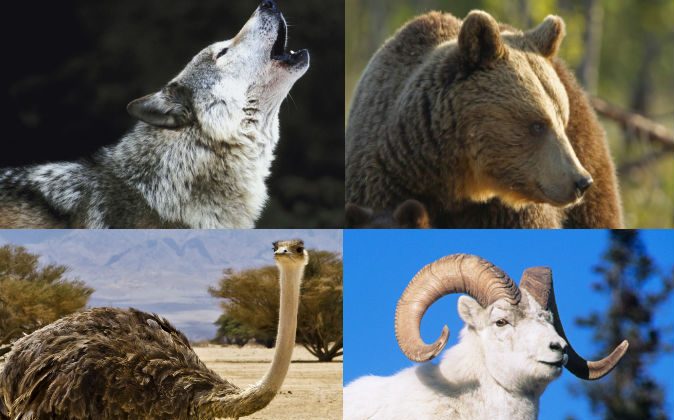 A variety of animals have adopted human children lost in the wilderness and taken care of them for years, raising them as their own. (Images of a wolf, goat, and bear via Thinkstock; Image of an ostrich via Shutterstock*)
Good to Know

Some of the fierce animals we dread have saved human children in distress and even taken care of them for many years, adopting them as their own. These wild children, when discovered, have had varying degrees of success in learning to act like humans again.

Dr. Deirdre Barrett, a psychologist who teaches at Harvard Medical School, tallied up all the known cases of children found living with animals from 1900 to 2004 in her book “Supernormal Stimuli.” She counted 31 children altogether.

Here’s a look at what species of animals adopted human children, followed by the stories of six such children.

1. Girls Raised by Wolves in India

In 1920, Kamala, 8 years old, and Amala, 18 months old, were found in a wolves’ den in Midnapore, India. The case was documented by Rev. J. L. Singh, a Christian missionary, who discovered them.

“The children were more ferocious than the cubs. Long matted hair fell below their shoulders, their jaws had a strange wolf-like formation, their teeth were sharp and pointed. They would eat no vegetable food, but could scent raw meat at a long distance,” wrote Dr. Abraham Sperling, faculty at the College of the City of New York, in his book “Psychology for the Millions,” quoting Lois Mattox Miller’s description in Science News Letter.

After about a year at an orphanage, Amala died. When she died, Kamala showed her first signs of human emotion. Kamala lived another 8 years, during which time she picked up a few words and learned to walk upright, according to Barrett. She would revert to all fours when she was in a hurry, however.

The physician who cared for them said they would only eat milk and meat, wrote Sperling. They kept nocturnal hours.

Their adopted wolf mother fought fiercely to keep them as it would had humans tried to rip away its pups, , according to Barrett. The wolf mother had to be shot. Other wolves from the pack would return to the village and howl.

Barrett wrote, “When writing about Kamala and Amala, I found the phrase ‘in captivity’ nearly slipped into my accounts of their deaths.”

John Ssebunya was an estimated 2 or 3 years old when he watched his father murder his mother then fled into the jungle in Uganda. Monkeys took care of Ssebunya for a year or so. A local villager went deeper than usual into the jungle looking for firewood and was amazed to find a human boy in the midst of a group of monkeys.

Paul and Molly Wasswa of Britain later adopted the boy, and journalist Euan Ferguson met with him in 1999 after the boy had 10 years of reintegration into human society. Ferguson, who described the meeting in an article published by The Guardian, said Ssebunya could only speak Swahili and he had a bad stutter. Though the boy was visibly different in his mannerisms, avoiding eye-contact and giving short answers, his answers reflected consideration and understanding.

For example, when Ferguson asked him about the unkind treatment he endured from some children after he  was rescued, Ssebunya replied through a translator: “They were just interested. I don’t really think bad of them for that. I was different.” He could vaguely recall the monkeys first cautiously approaching him after he’d stayed in the jungle alone for days. He recalled the discomfort of sleeping in a tree and how the monkeys taught him to travel with them and search for food.

According to Barrett, the monkeys threw stones and sticks at the villagers who tried to take Ssebunya away. She wrote: “When human children are discovered living with animals, their foster parents invariably mount a valiant fight to prevent their removal.”

Sidi Mohamed was found at the age of 15 in 1945 in North Africa. He told the anthropologist Jean-Claud Armen that he had lived with ostriches since he was 5 years old. Armen was quoted in the journal Notes Africaines, published April 26, 1945. The account is discussed in the book, “Unexplained Phenomena: A Rough Guide Special,” co-authored by Bob Rickard, the founder of the UK magazine Fortean Times: The Journal of Strange Phenomena.

The boy told Armen he found an ostrich nest when he was about 5 years old and the birds became accustomed to him. He stayed there, eating grass with them and learning to run at high speeds, sleeping under their wings at night. He was found by hunters and returned to his parents, but always wished for his life with the birds. This story seems to rely on the boy’s truthfulness, as it is not clear whether Armen did further research to verify the facts.

4. The Chicken Boy of Fiji

Unlike in the other stories mentioned, Sujit Kumar was not exactly adopted by the animals. He was locked up with the animals for so long he became like them. He spent more time with chickens locked up in a chicken coop for several years than he did with humans, who simply came to feed him and hose him down by way of bathing him.

When he was a child, his mother committed suicide and his father was murdered. He seems to have already had a mental disorder when his grandparents took him, and they locked him in a chicken coop because they couldn’t deal with him, one of his cousins told Elizabeth Clayton.

In a 2011 interview with the ABC, Clayton, an Australian businesswoman, told of how she met Kumar in Fiji and decided to take over his care. He was a grown man then; he’d been found at the age of 12, in 1984, and he was tied up in an institution for more than 20 years, again without much human interaction. He still ate like a chicken and would attack people by pecking at them.

At the time of the interview, he was in his 30s and still clucking by way of communication. Clayton was working on helping him communicate, feeling this would be key in finding another caregiver for him when she dies. She was in her 60s, and Kumar was in his 30s, so she was thinking ahead. She said people may balk at taking over his care if he is still unable to communicate.

Saturday Mthiyane was adopted by monkeys after his mother abandoned him in South Africa. He spent a year with them and was found at about the age of 5. He was named for the day of the week on which he was found. He was taken in by an orphanage, but after a year of roaming bent over with the monkeys, he only learned to walk upright again at the age of 15.

Even 10 years after being rescued, he hadn’t learned to talk, as a local publication discovered after following up on his case. He refused to eat cooked food. Mthiyane’s story is recounted briefly in the book “Child & Adolescent Development: An Integrated Approach,” by David F. Bjorklund, a professor of psychology at Florida Atlantic University; and Carlos Hernandez Blasi, a professor of psychology at Jaume I University in Castellón, Spain.

In 1962, geologists found Djuma running with a wolf pack in a desert region of Central Asia. They caught him in a net, but not without a fight from his pack; all the wolves were killed in the process. The boy was about 7 years old, and he spent the next 30 years in a hospital in Turkmenistan, according to Adriana S. Benzaquén in the book, “Encounters With Wild Children,” published by McGill University.

He started learning to talk after four years. He told researchers that he would ride on the back of his wolf mother as she hunted until he learned to run with the pack on all fours.

*Images of a dog, wolves, monkeys, gazelles, an ostrich, jackals, a panther, and a leopard via Shutterstock. Images of chimps, apes, a goat, and bears via Thinkstock. Image of chickens via Wikimedia Commons