Will Generation Z Give Us Superheroes for the Planet?
0

The Marketing Corner: A Look Ahead to Generation Z
0 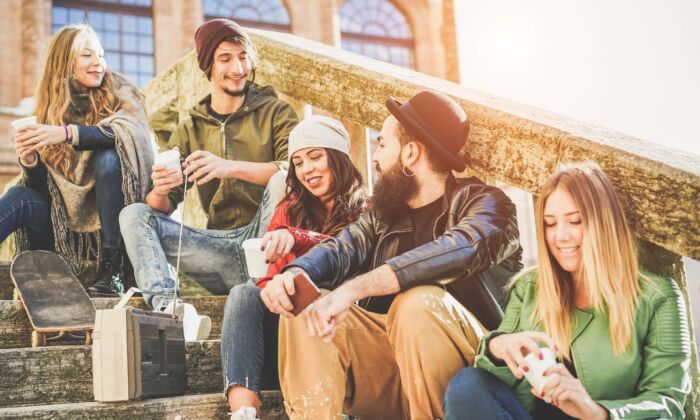 Today's young people live in an age of unprecedented prosperity but suffer mood disorders that sap their ability to thrive. (DisobeyArt/Shutterstock)
Life & Tradition

3 Harmful Ideas That Are Weakening My Generation

A world immersed in paranoid concerns of safety distorts one's outlook, which is detrimental to the ability to function and thrive
By Tyler Brandt
FONT BFONT SText size
Print

As a 23-year-old Gen-Zer who has dealt with these issues personally and has seen the impact on friends and loved ones, it breaks my heart.

On the path of bettering my mental health and trying to help others, I sought explanations on why things have gotten so bad and found a compelling hypothesis in the work of social psychologist Jonathan Haidt and legal scholar Greg Lukianoff.

In their co-authored book, “The Coddling of the American Mind: How Good Intentions and Bad Ideas Are Setting Up a Generation for Failure,” Haidt and Lukianoff examine Gen Z’s mental health problem. They argue that young people have been immersed in a world characterized by paranoid concerns of safety, which distorts their thinking and is detrimental to their mental well-being.

“Many university students are learning to think in distorted ways, and this increases their likelihood of becoming fragile, anxious, and easily hurt,” they say.

Haidt and Lukianoff claim “three Great Untruths” negatively impact the mental well-being of today’s youth. They also propose ways to counteract those untruths, which in turn, will produce a happier and more well-adjusted life. These great untruths are:

And in order to qualify as a Great Untruth, it has to meet three criteria:

The Untruth of Fragility:

What Doesn’t Kill You Makes You Weaker

It was philosopher Friedrich Nietzsche who said, “That which does not kill us, makes us stronger.” Nietzche’s words could be the antithesis of the current sentiment.

So in an attempt to protect kids from harm, we might actually cause them more harm. This isn’t only true of biological systems but is also true of economic and political systems, as well as our own lives. Nassim Nicholas Taleb, the author of the book “Antifragile,” puts it this way:

“We have been fragilizing the economy, our health, political life, education, almost everything … by suppressing randomness and volatility. Just as spending a month in bed … leads to muscle atrophy, complex systems are weakened, even killed, when deprived of stressors. Much of our modern, structured world has been harming us with top-down policies and contraptions which do precisely this: an insult to the antifragility of systems. This is the tragedy of modernity: as with the neurotically overprotective parents, those trying to help are often hurting us the most.”

Haidt and Lukianoff connect this desire to avoid threats to the rise of “safetyism,” which is characterized by safe spaces, trigger warnings, microaggressions, bias response teams, “matrices of oppression,” and call-out culture. Within this culture, many are led to believe that they are fragile and need constant protection from the outside world. This has caused many young people to develop overcautious and neurotic tendencies, wherein they avoid challenging circumstances to avoid harm.

So just as avoiding peanuts at an early age can harm us in the long run, avoiding “unsafe” opinions and conversations can harm us by making us oversensitive to everything. It is easy to see how a climate like this can contribute to anxiety. Young people are taught to see harm and danger where there is none.

To counteract the fragility trend, Haidt and Lukianoff encourage us to “[seek] out challenges (rather than eliminating or avoiding everything that ‘feels unsafe.’)”

The Untruth of Emotional Reasoning:

The second Great Untruth has been the triumph of emotional reasoning, wherein subjective feelings are heralded above objective truth. While it could be good that today’s youth are more in touch with their emotions than previous generations, the authors contend there’s been an overcorrection. We’ve actually de-emphasized the power of objectivity and rationality, and have lauded the mistruth of always trusting our feelings.

Haidt and Lukianoff explain it this way:

“Sages in many societies have converged on the insight that feelings are always compelling, but not always reliable. Often they distort reality, deprive us of insight, and needlessly damage our relationships. Happiness, maturity, and even enlightenment require rejecting the Untruth of Emotional Reasoning and learning instead to question our feelings. The feelings themselves are real, and sometimes they alert us to truths that our conscious mind has not noticed, but sometimes they lead us astray.”

In my experience, feelings are important and even essential. For example, when my stomach grumbles, it’s a cue that I’m hungry. I decide to eat and nourish myself. If I didn’t heed my body’s feeling of hunger, I would lose energy. Therefore, paying attention to a bad feeling makes me better off.

But sometimes, feelings are just kind of there and aren’t reflective of reality. When having a bout of anxiety, my feelings tell me, “Something is wrong! Pay attention now! Make sure you’re not having a heart attack!” In reality, I’m not going to die, it’s just my fight-or-flight mechanism activated at an improper time. If I trusted my anxiety all the time, I would believe myself to be in constant danger. That is not the case.

Unfortunately, it’s becoming more commonplace for young people to think that they are in constant danger. Lukianoff specifically noticed this after he checked himself into cognitive behavioral therapy (CBT) and had a realization that the thought patterns he was taught to avoid were affecting society at large. He learned that irrational and persistent thoughts can cause negative beliefs and emotions. But by practicing CBT, one can be trained to think in more productive ways to overcome negative feelings.

Some specific negative thought patterns include, but aren’t limited to, the following:

Emotional Reasoning: Letting your feelings guide your interpretation of reality. “I feel anxious, therefore this environment is dangerous.”

Catastrophizing: Focusing on the worst possible outcome and seeing it as most likely. “If I fail this test, I’ll never get a job.”

Overgeneralizing: Perceiving a global pattern of negatives on the basis of a single incident. “I always fail at everything I try.”

Dichotomous Thinking: Viewing events or people in all-or-nothing terms. “Nobody ever wants to hang out with me.”

Mind Reading: Assuming you know what people think without having sufficient evidence of their thoughts. “My boss probably thinks I’m incompetent.”

So imagine if a person exhibited these distorted thought patterns. You could easily see how that would make them more anxious and depressed. Perhaps you might notice some distortions you exhibit. I certainly do.

To counteract the emotional reasoning trend, Haidt and Lukianoff encourage us to “[free ourselves] from cognitive distortions (rather than always trusting [our] initial feelings).”

The Untruth of Us Versus Them:

Life Is a Battle Between Good People and Evil People

This last great untruth hearkens back to one of the distorted modes of thought—dichotomous thinking—that CBT tries to correct. Could it be true that Gen Z has worse mental health because they view people (and events) in stark terms? To answer that question, Haidt and Lukianoff analyzed the rise of identity politics and the resurgence of tribalistic thinking.

Rather than thinking in terms of “common-humanity” identity politics, which humanizes people of different groups, Haidt and Lukianoff argue that there’s been an increase in “common-enemy” identity politics, which identifies a common enemy in order to enlarge and motivate one’s tribe. (Think Hitler’s demonization of Jews to expand the Third Reich.)

To show how common-enemy identity politics currently operates, Haidt and Lukianoff provide an essay written by a Latino student at Texas State University that ran in the school’s newspaper, wherein the author states:

“Ontologically speaking, white death will mean liberation for all … Until then, remember this: I hate you because you shouldn’t exist. You are both the dominant apparatus on the planet and the void in which all other cultures, upon meeting you, die.”

Haidt and Lukianoff clarify that the student was calling for cultural genocide, meaning the dissolution of the culture of “whiteness,” rather than actual genocide; but the student’s words still demonstrate the false dichotomy of good people versus evil people. His words make it apparent that he fails to see individuals rather than tribes, and by grouping them into a subset he views as “bad,” he insinuates that they are “bad” as well.

As for what explains the resurgence of this kind of thinking, Haidt and Lukianoff claim it’s a form of “Marxist approaches to social and political analysis.”

Imagine being encouraged to constantly view people in terms of group identity and automatically labeling those groups as good or bad, based on their perceived position of power. You would go through the world constantly identifying people as potential threats. A worldview like this is toxic and could be one of the sources of Gen Z’s poor mental health.

To counteract the good people versus evil people trend, Haidt and Lukianoff encourage us to “[take] a generous view of other people, and [look] for nuance (rather than assuming the worst about people within a simplistic us-versus-them morality).”

Notice Your Thoughts, Free Yourself

After reading “The Coddling of the American Mind,” I noticed all kinds of distorted thought patterns and worked to change my worldview. I’m still far from perfect, but implementing the suggestions from Haidt and Lukianoff has made a positive impact on my well-being.

I challenge you to notice your thoughts and identify areas in which your thinking could be improved. Change starts from the bottom-up, and if like me, you wish that young people suffered less and improved their mental health, working on your own well-being is the beginning of that transformation.

As I said in a previous article about the power of individual improvement:

“As soon as you start improving, others around will take notice. Hopefully, your growth inspires people in your immediate sphere to grow alongside you. But, if some want to bring you down out of jealousy, don’t let that distract you. All you can do is offer a shining example for those ready to follow it.”

Tyler Brandt is an associate editor at the Foundation for Economic Education. He holds a bachelor’s in political science from the University of Wisconsin–Madison. In college, he was an FEE campus ambassador, president of his campus YAL chapter, and research intern at the John K. MacIver Institute for Public Policy. This article was originally published by the Foundation for Economic Education.
TOP NEWS