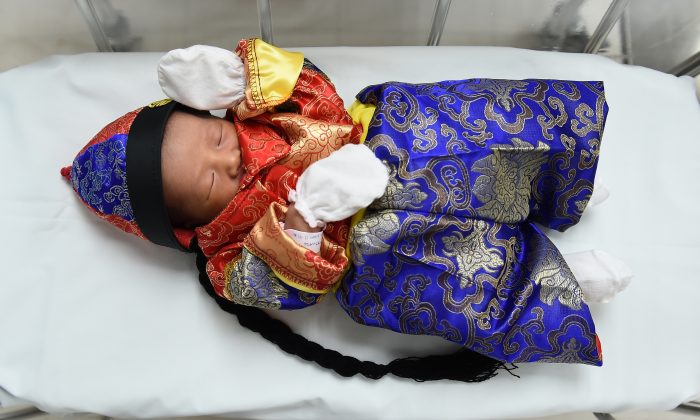 A newborn baby in a Chinese-inspired costume to mark the Year of the Rooster lays in a cot at Paolo Memorial Hospital in Bangkok on January 27, 2017. (AFP / Lillian Suwanrumpha)
Chinese Medicine

Year of the Rooster: What’s in Store?

Today is the beginning of the Year of the Yin Fire Rooster. The Chinese New Year starts on the first New Moon of the year and ends February 15th, 2018. It promises to be a fascinating year, don’t you think? Let’s see if Chinese astrology can shed some light on what is to come.

If you have been reading my yearly new year’s posts, you may recall that each year is represented by both an animal and an element from the Chinese zodiac.

This year we have the rooster as our animal and fire as our element. Also, years are either yin or yang; this one is yin, because the fire element is considered yang, this will make for a bit of juxtaposition. Read on…

The Rooster is a well grounded animal. In 2017, it will be to your benefit to plan your moves carefully.

A Rooster that is fiery combined with yin presents us with contradictions. Yin represents that which endures, nourishes, and supports growth. Yin also refers to forces that contract and move inward, such as stillness rather than activity.

Fire on the other hand, is hot, active and creative. This combination means that balancing these two natures will be key to a healthy year. You must take thoughtful actions and trust your intuition. Why? because fire symbolizes action and yin reminds us to look inside ourselves and think things through. Therefore, thoughtful actions combine yin and fire.

According to many Chinese astrologers, Yin fire can be an extremely volatile combination and  has the potential to be extremely destructive. We rely on the Rooster, a practical animal, to keep this Yin Fire energy under control.  When Yin Fire is controlled, it can lead to soothing conflicts and peaceful resolutions. A Yin Fire year is also a fantastic boost for female empowerment, and we will hopefully see many women in the spotlight this year.

Chinese New Year 2017: The Year of the Rooster

Famous People Born in the Year of the Rooster

Last year was the year of the Fire Monkey, the Monkey is all about the element of surprise, and unpredictability. The Rooster is a well grounded animal. In 2017, it will be to your benefit to plan your moves carefully.

Reflect on what you want to achieve and the steps required to achieve your goals. You will need to be patient and methodical in order to achieve your aims. Hard work and planning create the path to success in this Chinese New Year; don’t count on lucky breaks.

In my previous post about the Fire Rooster, I wrote about setting intentions for the new year in order to attract good fortune. According to Chinese astrology, clarity in your intentions will be especially important this year.

Characteristics of People Born in the Rooster Year

The Rooster is flamboyant and colorful. When you’re dealing with a Rooster, expect them to be strong willed and proactive, with many leadership qualities. They tend to be excellent organizers. On the other hand, some Roosters have a tendency to be shy and reserved.

They are often highly intelligent and possess a good sense of humor.  They love discussion and enjoy being social. They can also be self centered and stubborn over unimportant matters. Roosters have a volatile nature and should learn to avoid acting on impulse.

However they are very reliable, honest and loyal, traits that help to compensate for their less generous qualities.

*Note that the Chinese lunar calendar differs from ours so if you born near the beginning of the year double check that you aren’t at the tail end of the previous year.

What Do the Chinese Say About the Rooster?