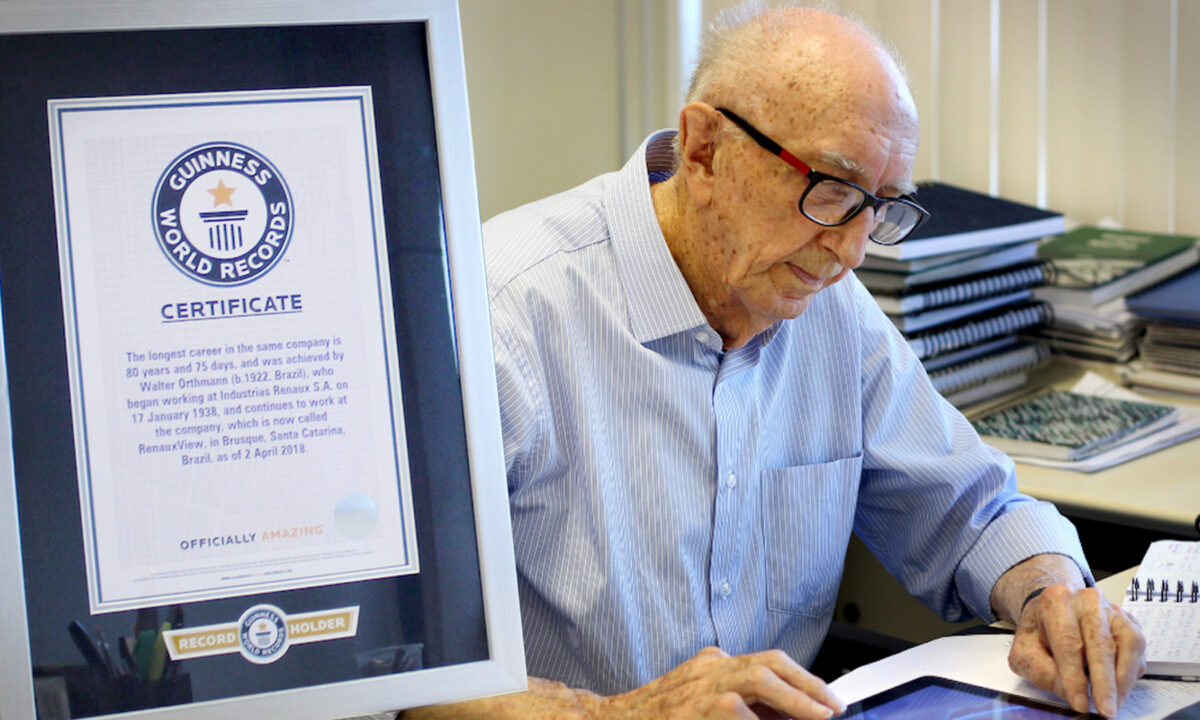 As folks working lifetime job tenures go the way of the dinosaurs, one man in Brazil — who just turned 100 — recently claimed the world record for the “longest career in the same company.”

Walter Orthmann has been working at ReneauxView in Santa Catarina state for 84 years and 9 days, Guinness World Records verified on Jan. 6, 2022.

His “passion, discipline, and commitment” motivated him to keep plugging away, doing what he loves, for the last eight-plus decades, the organization stated.

Orthmann’s impressive, longevous career began on Jan. 17, 1938, when at the age of 15 he started working as a shipping assistant at a textile company (then called Industrias Renaux S.A.). According to Guinness, he was always very enthusiastic about learning new things and quickly rose up through the company.

Born in the small town of Brusque, home to a large German population, in his early years he walked to school barefooted, rain or shine, mud or frost, propelled by a tenacity to learn.

He was an exceptional student with a brilliant memory and paid attention to detail; but due to financial strains, he went to work with his mother at a weaving mill where he was hired because of his proficiency in German. He’s been working there ever since.

“Back in 1938, kids were expected to work to help support the family,” Orthmann told Guinness. “As the oldest son of five, my mother took me to find a job at the age of 14.”

He showed exceptional willingness to learn and went above and beyond to perform his duty. He was soon promoted to a position in sales and later became a successful sales manager.

“I was given the opportunity to work as a salesperson,” he said. “I traveled to São Paulo and in less than one week I filled the production with orders equivalent of three month of work.”

A sense of “purpose, commitment, and a routine” are the best parts of having a job, he shared. It also gave him the chance to travel and establish good relationships with clients, who became friends. In the 1950s, he traveled across the country, meeting folks from different places and cultures.

Orthmann turned 100 years old on April 19, 2022, and celebrated his centenary with co-workers, friends, and family.

Today, he remains in good health, having excellent mental clarity and memory, Guinness reported. He exercises daily, which helps him maintain enough vigor to drive to the place he finds most meaningful every day — the office.

What working in the same career for over eight decades has taught him about life is to live in the moment.

“I don’t do much planning, nor care much about tomorrow,” he shared. “All I care about is that tomorrow will be another day in which I will wake up, get up, exercise and go to work; you need to get busy with the present, not the past or the future. Here and now is what counts. So, let’s go to work!”

The centenarian actually broke his own previous record of 81 years and 85 days, which he set in 2019.