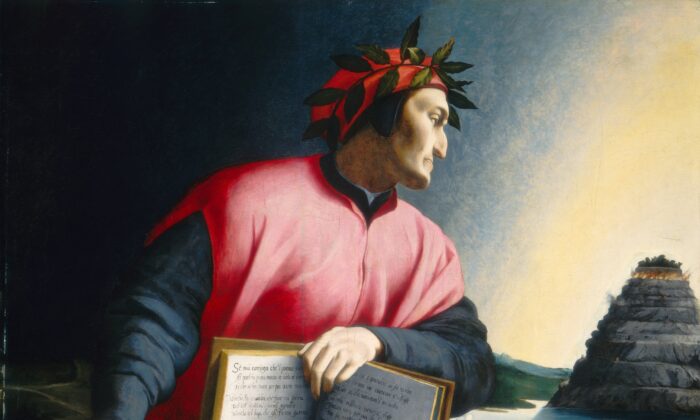 Gratifyingly, as we have now passed (Sept. 13 and 14) the anniversary of the death of Dante Alighieri 700 years ago (1321), there has been a massive upsurge in interest and promotion of his work, especially of “The Divine Comedy,” arguably the world’s greatest poem.

This is really good news. In the UK, for example, we find the artist Mark Burden publishing a series of fascinating art pieces representing each of the 34 cantos of Dante’s “Inferno.” Burden’s short YouTube video is well worth a watch.

The Art Quarterly magazine has a major feature by professor Gervase Rosser of Oxford University on Dante and refers us to two major exhibitions: “Dante: The Invention of Celebrity” at the Ashmolean Museum; and “‘The Divine Comedy’: from Manuscript to Manga” at Oxford’s Bodleian Libraries.

Also, my own English Cantos website has attracted well over 20 poets, professors, translators, artists (many from America), and even a sculptor—the great Tim Schmalz from Canada has allowed us to promote his astonishing figures—to contribute to celebrating Dante.

But the big—and more overtly educational—push is in the United States. The St. Austin Review has devoted its entire September–October edition to a “Homage to Dante.” Hillsdale College in Michigan has recently given free access to 10 lectures on Dante. These talks, mostly by professor Stephen Smith, are amazingly insightful and useful. I am myself working through them and attempting to digest all their profound insights!

Their aim is to educate and inform readers about Dante, and there are two things about how they are doing this that I particularly like. The first is that the whole text of “The Divine Comedy” is available on their website, in the original Italian as well as in an English translation. That’s extremely helpful.

However, it is the second feature that is at the heart of what they are achieving. They are creating a series of videos (the ones I have seen so far all between 12 and 16 minutes long) exploring the literary, theological, and spiritual significance of Dante’s work, canto by canto—100 in total—and with a whole bunch of different speakers and experts. New videos are released on Mondays, Wednesdays, and Fridays. This is really producing an ultrarich brew of ideas and insights.

Anyone genuinely interested in literature and poetry will find these clips massively informative and useful. But of course in studying Dante, we need to move beyond, as they do, the simple idea that poetry can be studied in some sort of ideas-vacuum, in which religious and spiritual concepts are removed in order to sanitize the product and not upset those who seem to have a problem with a worldview different from their own.

Thus, the opening Canto 1 introduction by Professor Emeritus Ralph Wood makes several important points. First, poetry has the “permanent power to transform us.” Secondly, and really pertinently, if Virgil is leading Dante out of Hell, who in our times is “leading us out of the abyss”? And third, and germane to the Epoch Times’ mission, “without fair and just government, the people’s moral and religious life will be compromised.”

Studying Dante is a mechanism for helping us to understand what “fair and just” might mean today, despite the fact that the poem is over 700 years old. Incredible, right?

These video clips do not seem to me to be overtly evangelical in their flavor; yet, at the same time, they are exploring Dante’s conceptions of Christianity and Catholicism, warts and all. And here the subtlety comes in. For as Fred Saunders says in his account of Canto 3, there are two Dantes to be aware of in “The Divine Comedy.” There is Dante the poet, who writes the poem, and so knows everything about and in it. And there is Dante the pilgrim, the character Dante depicts in the poem, who seems a lot of the time quite clueless about what is going on or why it is going on.

But as professor Saunders observes, Dante the poet—who knows everything—is the ideal teacher, whereas Dante the pilgrim, who knows very little, is the ideal student. The setup of the journey, then, is a kind of catechism for us the reader: As Dante the pilgrim continually fails to understand what is going on, he has to ask Dante the poet (through other characters such as Virgil) questions. We, the readers, then, are schooled in the meaning of the poem. Truly, a fabulous setup both for our entertainment and our learning!

And why go to all this trouble? Because Dante is an antidote to so much lax and irreverent thinking today. As professor William Franke expresses it in his book “Dante’s Interpretive Journey”:

“In effect, Dante employs poetry as a way of gaining a hearing for the Logos.”

The word “Logos” here is critical, for it does not simply allude to John’s Gospel, Christ, or Christianity generally; it does more than that. It refers to order and meaning throughout the whole cosmos, while disorder and meaninglessness are the “abyss” (to use professor Ralph Wood’s word) of our time.

Dante can help lead us out of this, which is why I strongly recommend you tune in to the 100 Days of Dante. It really is powerful stuff.