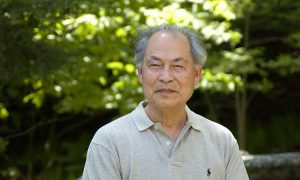 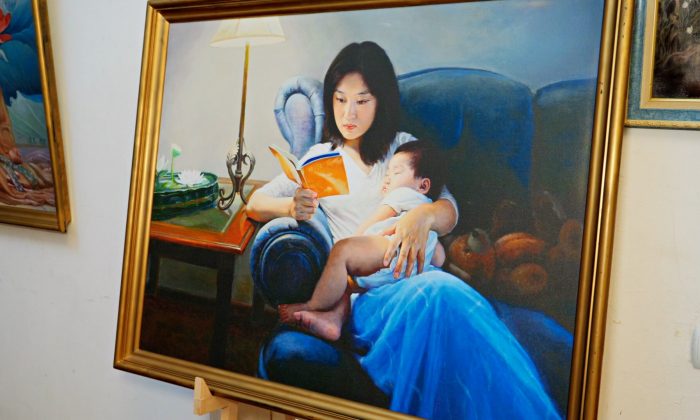 Painting of a woman holding a child and reading Zhuan Falun from the Zhen Shan Ren Art Exhibition. (NTD/screenshot)
Europe

The international Zhen Shan Ren Art Exhibition has arrived in Ukraine’s Capital, spotlighting paintings that show the beauty of self-cultivation and the severe persecution that prisoners of conscience face in China.

The Art of Truth, Compassion, Tolerance exhibition consists of works from more than 12 artists with diverse backgrounds, in terms of professional experience, artistic styles, and cultural upbringing. What they have in common is their practice of Falun Gong (also called Falun Dafa), a form of spiritual meditation that originated in China, and their united effort to express the experiences they’ve had in practicing the spiritual discipline.

The works of art, painted in what is called the “New Renaissance” style, depict photo-realistic scenes and stories of torture and perseverance, often inspiring viewers to consider the role of ethical values in society and their own lives.

The exhibition opened in Kiev on March 15.

Alexandra Goncharenko, the organizer of the exhibition, gave details about the style of the paintings in an interview with NTD News Reporter Anna Varavva.

“The paintings combine western and eastern styles. Western involves the perfection of bodies, the transfer of light and shadow according to the best traditions of the Western school of art, and the oriental style suggests a deep meaning,” Goncharenko said.

“Half of the canvases show the beauty of a person who has taken the path of cultivation by Truth, Compassion, Forbearance, and the second part of the paintings is the persecution that is taking place in China,” she added.

In China, the creators of many of these paintings were oppressed for their commitment to practicing Falun Gong. The basic principles of this practice—Truth, Compassion, Forbearance—form the name of the exhibition. The Chinese Communist Party began to suppress Falun Gong 20 years ago because of its extreme popularity. Although it is a peaceful practice, the regime saw it as a threat to its power.

Painting Virtues After Escape From Persecution

It was the release of Professor Kunlun Zhang, arrested for his belief in Falun Gong, from a Chinese brainwashing center in 2001 that spurred communication between the artists, many of whom have never met face to face. In the course of sharing experiences over three years, ideas for the exhibit began to take shape. The exhibit would encompass four main themes: harmony, adversity, courage, and justice.

By 2004, works that are part of the present collection began to be produced. Today there are 33 pieces in total. The artists include: Xiaoping Chen, Dr. Xiqiang Dong, Kathy Gillis, Yuan Li, Daci Shen, Weixing Wang, and Dr. Kunlun Zhang.

Alexander Dudka, chairman of the supervisory board of the Ukrainian Cultural Foundation, also commented on the inner meaning of the artwork.

“Apparently, this is the main idea of these works: people are experiencing great horrors but they have faith and this idea of light, kindness on their faces. And this is perhaps the most powerful weapon that humanity can possess in order to truly win,” Dudka told NTDTV.

The exhibition has traveled the world since 2004. It has already visited more than 50 countries.