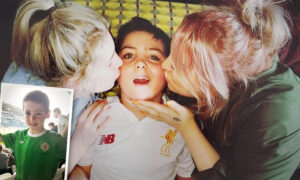 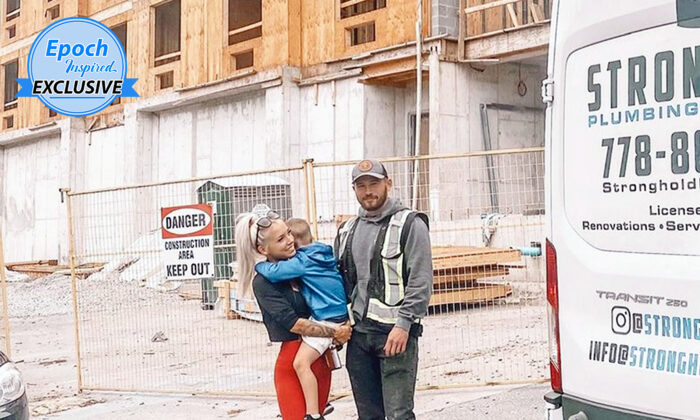 'Hard work is kind of essential for wellbeing in life, for yourself, your family ... and society as a whole.'
By Louise Bevan

A young plumber who quit a secure job to go solo is celebrating the fruits of his labor. Not only does he now employ others, but he’s also just landed the largest plumbing contract of his career thus far.

Noah Fladager, 26, has been married to Caitlin, 27, for almost seven years. Speaking to The Epoch Times, the couple said that life with their two kids in Vancouver, Canada, is “good, but busy.”

Noah’s journey toward becoming his own boss began when he started Stronghold Plumbing in 2019 after four years of working as a plumber in Vancouver. He wanted to be able to provide the life he had dreamed of for his family.

“You’re pretty stuck at a certain ceiling when you’re working for somebody,” he said.

Noah didn’t go to university, but was told that he could make good money with a trade skill and found that plumbing was a good fit. As of 2021, he has proven himself right: Business is booming.

Caitlin said despite their family members and friends were hesitant of Noah—a father to two young children—quitting his secure, well-paying job and venturing into a business, he has marked a milestone success with his determination and hard work.

Ignoring the naysayers, Noah worked six to seven days per week until he was doing well enough to hire his first employee. ⁣Today, he has multiple employees and has just landed his largest job yet, installing the plumbing in 40 rooms inside a new hotel.

Caitlin said she loves Noah for his drive and his ability to balance work life with fatherhood. She feels that life’s hardships have definitely made them “stronger and more solidified” in their love for each other, and they now feel they have the wisdom of a 50-year-old married couple.

Caitlin is proud that her husband’s hard work means that they can afford to live well in Vancouver and their kids can have “nicer things” than they had when they were younger.

“Noah isn’t the type of person who will just say he wants something and then work the bare minimum together,” she said.

“When he wants something, he just goes all in and won’t stop until he’s worked to get it. I find that really admirable because that’s really hard to find in anybody nowadays.

“I also love how good of a dad he is and how much he helps me when he is home.”

Noah and Caitlin, who met at high school in 2010, have toiled since the early days of their relationship. When Caitlin got pregnant at 17, Noah left his job at a pizza parlor and moved them to Alberta to begin a plumbing apprenticeship.

“It was really hard though, because we moved 10 hours away from all of our family with a 3-month-old baby,” Caitlin recalled.

It didn’t get easier when the couple returned to Vancouver; both of their families warned Noah to stick with his secure job rather than risk a solo venture.

“My dad and his dad both have their own companies in the trades,” she said, stating that she understood where their parents’ fears were coming from and how they just wanted her family to be well-supported.

“But I just told them, ‘I know Noah,’ and he’s always wanted to do his own thing. I always believed in him because he has the millionaire mindset,” she said.

Noah’s journey to a secured and better future wasn’t without sacrifices: family time being among them.

“We got the two young kids at home,” said Noah. “And it’s hard for Caitlin as well, because I’m always putting in a lot of long hours which is what you got to do. When you start up a company, you don’t exactly know where your next paycheck is coming from.”

Yet, seeing his hard work pay off has propelled Noah to keep going. Caitlin, who works from home, got used to spending a lot of time with their kids by herself and dining alone. But through it all, she has continued to champion her husband from the homefront.

“I don’t know if I would be able to get where I am today without her, for sure,” Noah said of his wife.

Now that Noah has staff and Stronghold Plumbing is growing, he’s trying to learn how to delegate. He’s also pleased that he no longer has to battle the skeptics.

Caitlin hopes that others hear their story and know that it’s possible to marry young, have kids young, and still live well. While claiming university is “important,” she also hopes people are encouraged to see that a modern-day university education isn’t a necessary prerequisite to success.

“I just want people to see that if you make a mistake when you’re young, or you just jump into a situation before you think you’re ready, or before society thinks you’re ready, you can really be a good thing sometimes,” she said.

Noah, who loves Caitlin for her perennial support and for being a “great mom,” doesn’t believe his story should be unique.

“Hard work is kind of essential for well-being in life, for yourself, your family, your everything, and society as a whole,” he said.

“A lot of people are in harder circumstances than others, but if you are willing to put in the work, you can follow your dreams.”