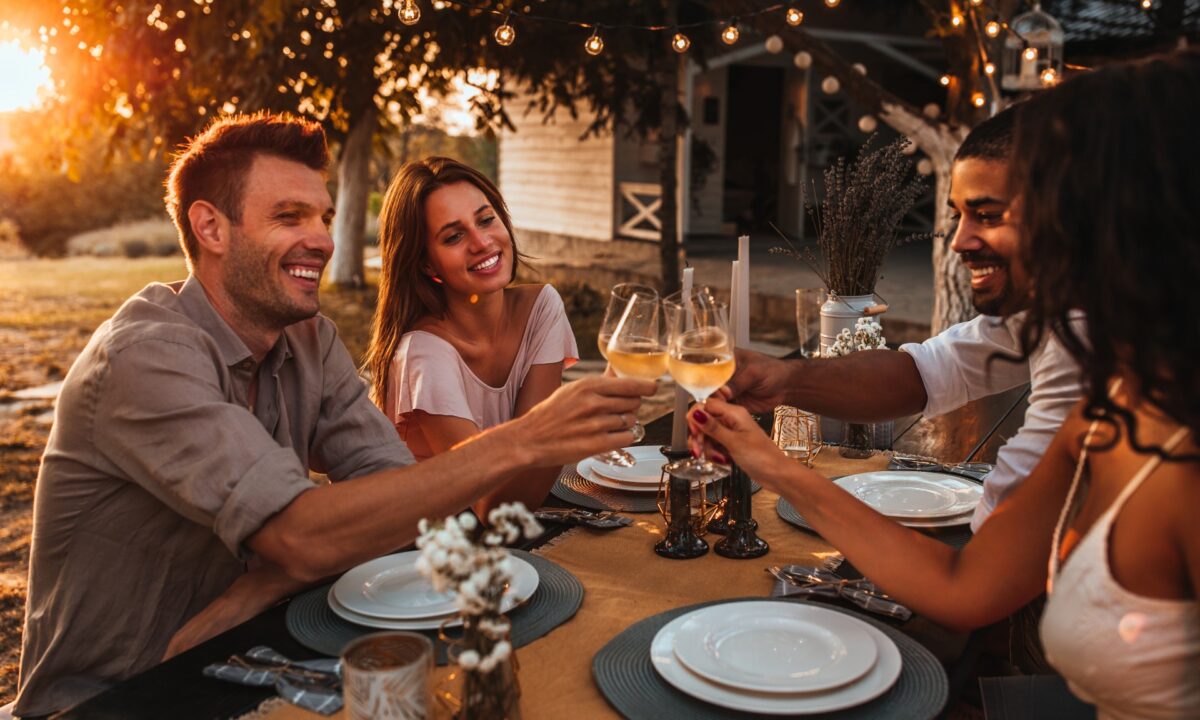 Numerous aromatic interferences act as roadblocks to appreciating fine wines. The smell of food when dining out is a big one. (bbernard/shutterstock)
Food

Yes, the Smells of Your Food—and Everything Else in the Room—Make a Difference When You’re Drinking Wine

I renamed it the “unhappy hour,” even though the thought was appreciated.

The hotel put out two wines at 4 p.m. in its lobby, a white and a red. A sign invited guests to help themselves. Ignoring that the wine wasn’t exciting, I nonetheless poured two glasses and we sat on a couch.

Then I noticed what most other hotel guests never would have: the smells.

First there were vanilla-scented votive candles on every flat surface in the lobby, imparting such a strong scent I couldn’t smell the wine at all.

Then there was the wineglass—it smelled like chlorine from the additive used to make them sanitary. The carpeting was new, so the lobby smelled like petroleum, and the entry door kept opening, allowing vehicles’ diesel fumes to spew in.

We were under nasal assault.

For some people, reading this may conjure up the late comedian Pat Paulsen, who often said, “Picky, picky.” But the aromatic intrusions were so annoying that we had only one choice. We went around the corner to a shop, bought a bottle of vinho verde from Portugal, and did our own happy hour in our room.

Some people don’t pay any attention to this stuff, but numerous aromatic interferences act as roadblocks to appreciating fine wines. And the more subtle the wine is, the easier it is to interrupt its delivery of a key element.

One of the most obvious examples, and it’s relatively unavoidable, comes in restaurants where kitchen smells are a huge part of the dining experience. And it gets even worse in places that do tableside preparation, such as that of steak Diane, where brandy or cognac are added to the dish, which then is dramatically flamed in the middle of the dining room!

That precise experience occurred to me years ago at an otherwise excellent restaurant—just after we had opened a bottle of a great white Bordeaux. All we could smell was the Worcestershire sauce and the mustard, which steak Diane calls for.

It is for reasons such as this that I rarely order subtle white wines when I am out to dine. Chablis, chenin blanc, and other similarly delicate whites usually cannot stand up to the assertive aromas that many foods impart.

I reserve such lighter wines for seafood and certain Asian foods, such as Thai and Japanese, which are usually better with white wines anyway.

Best bets when dining out are fairly forceful reds, in particular when you can decant them to open up their aromatics and allow them to compete with ambient smells in the room.

Similar aromatic challenges occur when sampling wines out-of-doors. Some people may not be able to smell grass, trees, and other flora, but those scents do have a way of impeding our ability to sense wine’s more elusive characteristics.

If nothing else, the wine-sniffing experience outdoors differs from the same wine poured inside.

Another pitfall occurs when the vessel isn’t glass. The wrong kind of plastic can give off such a foul smell that the wine is virtually ruined.

I once was a judge at a wine competition where the white plastic tablecloths smelled like a petroleum plant. All the tablecloths were removed and discarded outside.

This subject makes more sense when you’re considering quality wine, from which you’re trying to experience all of its charms. If all you care about is how wet a wine is, ignore the foregoing.