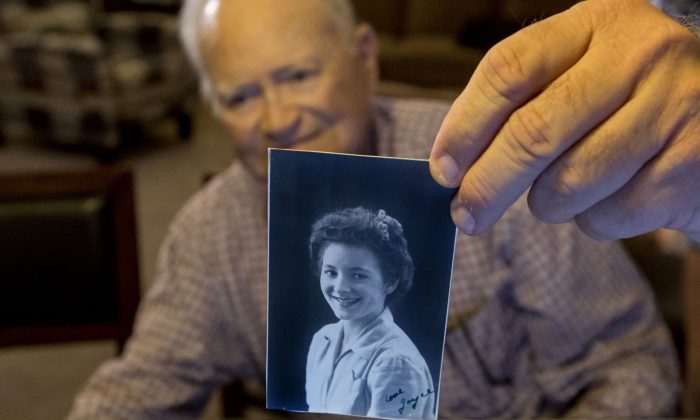 Norwood Thomas, 93, holds up a photo of with Joyce Morris at his home, on Nov. 6, 2015 in Virginia Beach, Va. (Bill Tiernan/The Virginian-Pilot via AP)
HK Life

WWII Veteran to Reunite With Wartime Girlfriend After 70 Years Apart

A World War II veteran will fly to Australia next month to reunite with a wartime girlfriend he hasn’t seen in 70 years.

Norwood Thomas, a D-Day paratrooper who is now 93, will travel from Virginia Beach to Adelaide, Australia to meet with Joyce Morris, 88, the Virginia Pilot reports.

They had met near the River Thames in England a few months before Thomas parachuted into France during WWII. He had wanted to marry her, but they lost touch of each other, and didn’t speak for seven decades before reconnecting over the internet a few months ago.

One day, Joyce’s son was on the computer when she asked him if it could be used to look people up. He searched for “Norwood Thomas, 101st Airborne,” which led to a news story about Norwood, who went skydiving for his 88th birthday. Joyce’s son contacted the reporter of the story, who gave him Norwood’s contact.

Soon, Joyce and Norwood were talking to each other on Skype. They wanted to meet again in person, but both had health problems, and Norwood was on a fixed income. After the Virginia Pilot ran a story on their online reunion, readers donated $7,500.

The amount wasn’t enough to cover a trip to Australia for Norwood and his caretaker son, Steve, but Air New Zealand decided to cover the rest, and will fly them first class there, free of charge.

“I’m numb,” Norwood told the Virginia Pilot. “I have no idea what my emotions are going to be once we meet face to face.”

They plan to spend Valentine’s Day together.