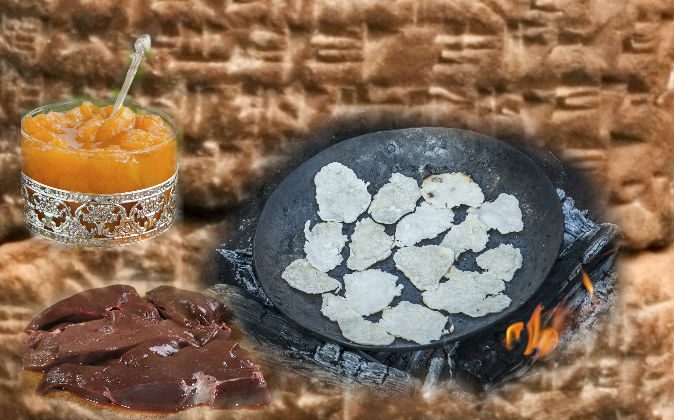 Would You Enjoy This 4,000-Year-Old Hittite Feast?

An archaeological team excavating an ancient center of the Hittite civilization in Turkey has recreated a 4,000-year-old Hittite feast including sweet breads, casseroles, grilled lamb hearts, and apricot butter, using the same techniques and methods used four millennia ago. The knowledge used to create the meal was based on information acquired from studying ancient tablets found at Alacahöyük.

Alacahöyük was one of the most important centers of the ancient Hittite civilization and remains an important archaeological site. It was first occupied in the Chalcolithic Age, around 7,000 years ago, and has been continuously occupied ever since. A Sphinx Gate, along with the discovery of sun disks, bull statues, and 13 tombs of Hittite kings, reflect the significance of the site.

Aykut Çınaroğlu, the head of the excavations at Alacahöyük and professor of archaeology at Ankara University, reported that his team had conducted research on the diet and preparation methods of the Anatolian-Hittites, dating back 4,000 years.

The Daily Sabah reports that the only piece of kitchenware that was used to prepare the feast was a knife, and buckwheat was ground down with a stone to make flour. It was made right at the archaeological site, adding to the authentic feel of the meal.

Because the Hittites used to record everything, including food recipes, a lot of information was learned about their cuisine by studying their ancient tablets. Among the records, researchers found reference to more than 100 types of pastry.

“Ancient settlers wrote that they ate cold meat, cooked onion, and bread on a festival day. They did not use yeast while making bread or cook them in moist ovens. The team tried to make [the bread] … with pounded wheat, not sifted flour,” Chef Ömür Akkor, an excavation team member, told the Daily Sabah.

By studying the tablets, the research team also discovered that there were incredibly strict hygiene measures in Hittite kitchens. Chefs who allowed animals to wander into the kitchen, or chefs with long hair or beards who didn’t take measures to contain their hair could be punished with the death penalty. His or her family would also be killed.

The feast prepared at Alacahöyük included a sweet bread called Nindaku, as well as other breads made from barley or flavored with cheese and figs. Also on the menu was apricot butter, a selection of cold meats, a casserole of meat, olive oil, honey, grilled lamb liver and heart, sandwiches made with cooked meat and onion, and beruwa (a name given to mashed food) with chickpea and cucumber.

The Hittites were an ancient Anatolian people who established an empire in north-central Anatolia around 1600 B.C. This empire reached its height during the mid-14th century B.C. when it encompassed an area that included most of Asia Minor as well as parts of the northern Levant and Upper Mesopotamia. After 1180 B.C., the empire came to an end, splintering into several independent “Neo-Hittite” city-states, some of which survived until the 8th century B.C.