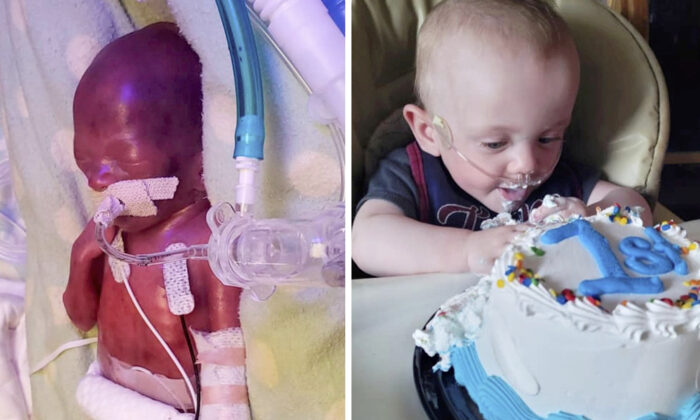 World’s Most Premature Baby Was Given Zero Percent Odds of Survival, He’s Now 1 and Is Thriving

The world’s most premature baby who was born at 21 weeks and two days has defied the odds: he is now more than a year old and is learning to crawl.

Richard Hutchinson from Somerset, Wisconsin, was born 131 days premature and weighed only 340 grams—less than 12 ounces—breaking a record that stood for 3 1/2 decades.

On reaching his first birthday in June 2021, he was declared by the Guinness Book of World Records as the most prematurely born baby to survive.

“I still don’t believe it; even though the certificate is in our living room, ” Richard’s mother, Beth, 36, said. “He was so tiny he could fit in my husband’s hand.”

Beth discovered she was pregnant with Richard on Feb. 3, 2020, after she noticed her dogs were following her around.

Only after taking her first pregnancy test did Beth realize that her pregnancy might be the reason why the dogs were following her around. The tiny baby was to be a rainbow baby after Beth suffered a miscarriage in 2018.

Beth, who was about three weeks pregnant when she got her positive test, said she was “ecstatic” and “over the moon happy” on finding out about Richard.

“I took seven tests just to be sure,” Beth said. “It was a very faint line, so I had to make sure my eyes were not playing tricks on me.”

At 22, Beth was diagnosed with polycystic ovarian syndrome (PCOS), a hormonal disorder that can cause fertility problems. This meant she had regular ultrasounds during her pregnancy to make sure everything was going smoothly.

When Beth got her 20-week ultrasound done, everything was normal and there were no indicators that anything was wrong, she recalled.

However, on June 3, 2020, Beth didn’t feel great, so she visited a doctor for a checkup and it was here that she was told she was 3 centimeters dilated.

“I didn’t even know I was in labor,” Beth said. “I had so many emotions but at the same time, I didn’t want to believe it was real.”

Beth admits that she even panicked a little at this time as she wasn’t sure if Richard would make it.

“It was a lot of emotions but I was trying to keep positive and stay as calm as I possibly could—the less stress on him the better,” Beth said.

Doctors at the Children’s Minnesota Hospital in Minneapolis tried to prepare the couple for the worst and told them that he had a zero percent chance of survival.

“I was kind of numb because being on all the pain meds and I was trying to keep myself in a positive place,” Beth said.

Richard was born still in the amniotic sac, so both Beth and Rick couldn’t even see him, his eyes were fused shut, his blood vessels were visible through his skin. He was whisked immediately into the neonatal intensive care unit (NICU).

Around four hours later, Rick and Beth got to see their son properly for the first time.

“It was overwhelming and very emotional,” Beth said. “I don’t think we said anything, but we cried a lot.”

“When I first saw Richard, I was very nervous and scared,” Rick told The Epoch Times via email. “I was not sure if he was going to make it, yet I was amazed how small and fragile he was.”

Richard stayed in the hospital for six months, spending 4 1/2 of those in the NICU with “a ridiculous amount of IV lines,” until his due date.

His parents had to journey across the state to see their son at the hospital in Minnesota every day, and for the first month, they weren’t even sure he would make it.

Richard had several blood transfusions as he was born septic, and was on two different ventilators.

He was fed through an IV for three weeks before being transferred to the feeding tube, and the first time his parents heard him cry was when he was 4 months old.

“He didn’t really find his voice right away, and now he definitely knows he has voice,” Beth said. “Once he started getting milk, he was like, ‘ooo this is good stuff,’ and that’s when he started turning around and getting better.”

A happy and proud mother, Beth said that since Richard has gotten home, life for the couple has been nonstop, and the toddler seems to have wrapped his parents around his finger.

“He’s very silly, loves to play and goof around,” Beth shared. “He does amazing developmentally and he’s basically on track—I think we got really lucky there.”

On June 5, 2021, Richard celebrated his first birthday with cake and ice cream. The Hutchinsons even finalized the paperwork with Guinness World Records and the little boy officially became the world’s most premature baby.

Beth shares that she loves being a mother.

“It’s something I’ve always wanted to do and I’m the oldest of five kids, so I love kids and helped my sisters raise their kids,” Beth said.

Additionally, the couple are also using Richard’s story to help others and spread hope.

“I’m in a lot of support groups on Facebook and I have reached out to several moms who have had PCOS—having PCOS and having a preemie go hand in hand and it’s more common than people think,” Beth said.

This has helped a lot of people reach out for advice and share their stories with Beth.

“Both my husband and I talked to several families who said Richard’s story has helped their babies, which is the one thing I wanted,” Beth said.