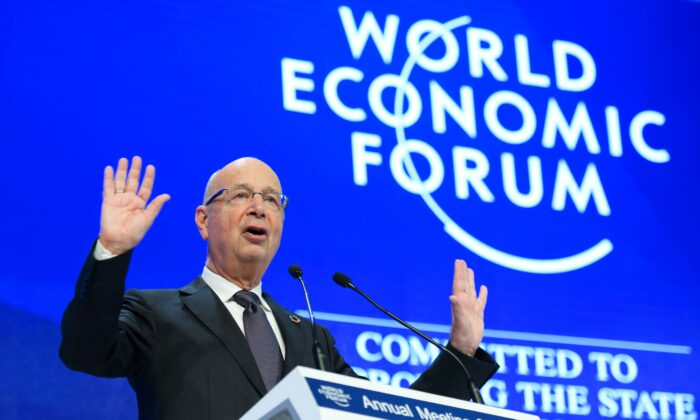 Klaus Schwab, founder of the World Economic Forum (WEF) declared that the Chinese Communist Party (CCP) is a “role model” for other nations in an interview with Chinese state media.

Schwab made the comments in an interview with the Chinese state-run television network CGTN on the sidelines of the APEC CEO Summit in Bangkok, Thailand, on Nov. 19.

“I respect China’s achievements, which are tremendous over the last over 40 years, since the opening and reform policy came into action. I think it’s a role model for many countries,” Schwab, said, adding that he believes countries should be able to choose what system they want to live under but that the “Chinese model is certainly a very attractive model for quite a number of countries.”

“I look very much forward to having a strong Chinese voice in Davos [in Switzerland, where the WEF is held] to explain even better to the world what it means to see the Party Congress which laid down the principles of the policy [and] what it really means for global collaboration and for global development,” Schwab added.

Schwab’s comments come shortly after Chinese leader Xi Jinping secured a third term as head of the ruling Communist Party and amid increasingly fraught relations between Beijing and Washington.

China has implemented strict COVID-19 pandemic containment measures since the start of the outbreak, issuing vaccine passports, mass testing, and locking down large swathes of the country. Many experts have called the measures “draconian” as they have led to residents being unable to work and in some cases, unable to access basic food and medical supplies.

Protests have broken out in recent days following the deaths of at least 10 people in Xinjiang’s capital city of Urumqi in northwestern China after medical workers were apparently unable to access an apartment that was on fire.

Beijing’s National Security Law, which was passed in 2020, has seen suppression of protesters.

The Chinese regime’s persecution of the Uyghurs, including political reeducation, forced labor, torture, and forced sterilization on the basis of their religion and ethnicity, has also been condemned by world leaders.

On Sunday, the outgoing director of the U.S. National Institute of Allergy and Infectious Diseases (NIAID), Dr. Anthony Fauci, said China’s regime had failed to cooperate with an investigation into the origins of COVID-19 and accused the CCP of raising suspicions that they may have covered up the origins of the pandemic by acting secretively.

Elsewhere in his interview with CGTN, Schwab revealed his “great satisfaction” at seeing the increased potential for improved Chinese and European Union relations.

“I’m very pleased that we speak not only about Chinese–U.S. relations but also again about European–Chinese relations, and I feel despite all the question marks and to a certain extent cautious approach which we see in Europe, I think that very close ties can be established again between China and Europe because there’s such an interwoven economy,” Schwab said.