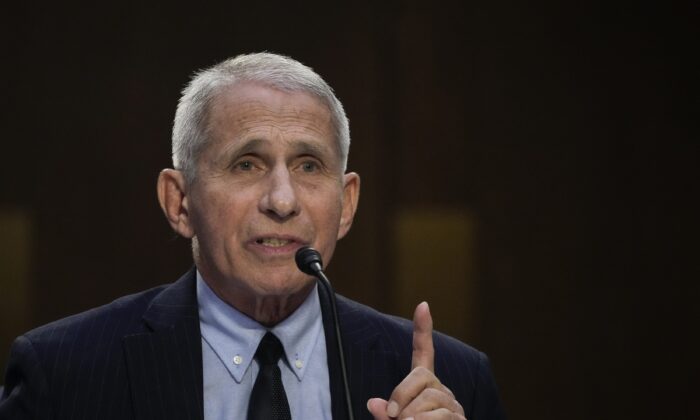 Dr. Anthony Fauci, director of the National Institutes of Allergy and Infectious Diseases, testifies during a Senate hearing in Washington on Sept. 14, 2022. (Drew Angerer/Getty Images)
By Katabella Roberts

The director of the U.S. National Institute of Allergy and Infectious Diseases (NIAID) and President Joe Biden’s chief medical adviser, Dr. Anthony Fauci, has accused China of failing to cooperate with an investigation into the origins of COVID-19.

Speaking on CBS’s “Face the Nation” on Nov. 27, Fauci was asked whether he has seen any of the data that Beijing has handed over after being asked to do so by the United States as part of a probe.

Fauci, who is retiring next month, said he had yet to see such data, before accusing China’s ruling Chinese Communist Party (CCP) of acting secretively and raising suspicions worldwide that they may have covered up the origins of the COVID-19 pandemic.

“No,” Fauci responded when asked if he had seen any of the data.

“You know, one of the problems is that—and this is historic, it goes way back to bird flu, the H5N1, the H7N9, the original SARS-CoV-1—is that the Chinese, not necessarily the scientists that we know and we have dealt with and collaborated with productively for decades, but the whole establishment of political and other establishments in China, even when there’s nothing at all to hide, they act secretive, which absolutely triggers an appropriate suspicion of like, ‘What the heck is going on over there?'”

Fauci said Beijing had provided the United States with an explanation as to why the regime won’t allow officials to look at the primary information pertaining to the initial outbreak. However, he noted that officials with the World Health Organization had managed to obtain some “actually quite helpful” data during its visits.

The United States needs more “transparency” from Beijing and a “collaboration to open things up so that we can discuss it in a non-accusatory way,” according to Fauci.

‘We’ve Got to Investigate Every Possibility’

The health official noted that the Biden administration is eager to know all of the details about what occurred with the individuals who were the first to be infected with COVID-19 but stressed that the administration will “keep a completely open mind as to what the origin is.”

“Having said that, if you look at the examination by highly qualified international scientists, with no political agendas, they’ve published in peer-reviewed journals that the evidence is quite strong that this is a natural occurrence,” Fauci said. “Does that mean we’ve ruled out that there was something funny going on, a leak? Absolutely [sic]. And I and all of my colleagues keep an absolutely open mind. We’ve got to investigate every possibility because this is too important not to do that.”

Republican lawmakers previously indicated that they would investigate the origins of COVID-19 if they won a majority in the House, which they did earlier this month.

In October, Rep. James Comer (R-Ky.) told The Epoch Times that Republican lawmakers had already uncovered “growing evidence” that the virus “likely originated from the Wuhan Institute for Virology (WIV) in China and the Communist Party of China covered it up.”

Republican lawmakers have indicated that they’ll summon Fauci to testify under oath as part of the probe.

Fauci told CBS on Nov. 27 that he was “fine” with being called to testify before lawmakers and that he’s “very much in favor of legitimate oversight,” but claimed that Republican lawmakers have “clearly politicized it.”

Fauci is resigning as director of the NIAID, chief of the NIAID Laboratory of Immunoregulation, and chief medical adviser to Biden next month.