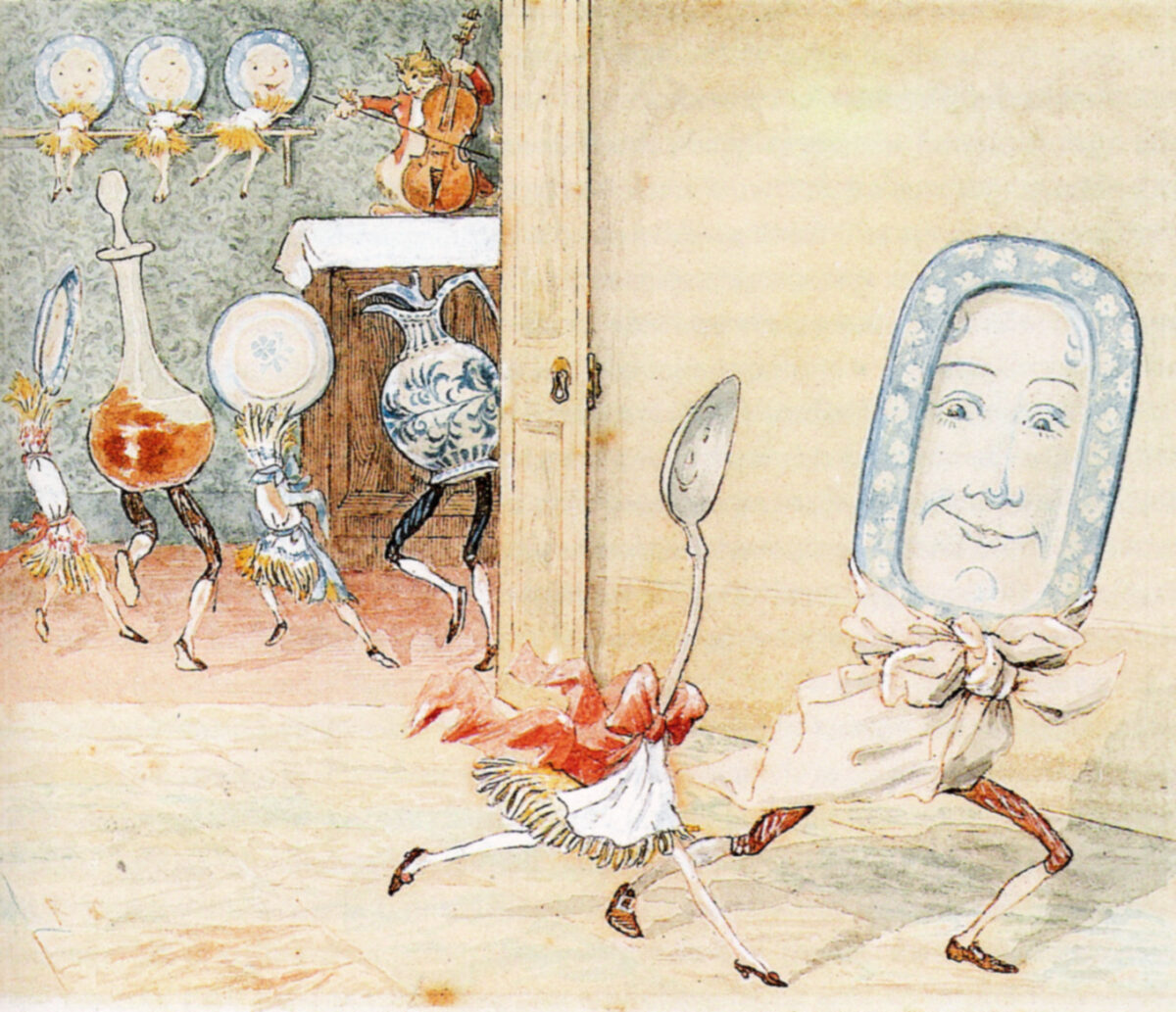 "And the Dish Ran Away with the Spoon," by Randolph Caldecott, 1882. Pen and ink, gouache, and watercolor on paper; 6 5/16 by 7 3/4 inches. London: George Routledge and Sons. (Public domain)
Family & Education

Word-Dancing With Mother Goose: Nursery Rhymes Are Wonderful for Both Learning and Play

Six years had passed since my children, their spouses, and their children had last gathered for some time at the beach, and things, I quickly discovered, had changed.

The kids who had once splashed in the ocean or dug for sand fleas at the tide’s edge were now teens who spent a good part of their time watching the widescreen television, taking sedate walks on the beach, and putting their heads together in quiet conversations broken by sudden laughter. They walked rather than ran to meals and treats, and when they weren’t wearing bathing attire, dressed as if it mattered, especially the girls.

Replacing them was a squad of siblings ranging in age from a toddler to a 10-year-old. This gang spent half the day in the surf, sifted for hours through the sand hunting for sharks’ teeth, and ran everywhere they went. When I served up my traditional ice-cream lunch—and yes, most of the toppings were healthy fruits, nuts, and granola—the rising second-grader who had polished off her final helping stepped to the deck, raised her clenched fists like a triumphant boxer, and roared, “This is the most perfect day ever!”

The more I watched them, the more these younger ones fascinated me. They would become absorbed in some object—a bucket filled with seawater, a dead crab, a puzzle—that would have bored the teenagers in a heartbeat. Play really was serious learning; you could almost see the wheels spinning in their heads.

That brings me, in about as roundabout a way as possible, to nursery rhymes as one of those toys of learning and play.

A Brief History of Rhymes

Pussy’s in the well.

Who put her in?

Who pulled her out?

What a naughty boy was that,

To try to drown poor Pussycat,

Who ne’er did him any harm,

But killed all the mice

In the Farmer’s barn.

That nursery rhyme comes from 1580, the oldest recorded in the English language. In an earlier version, the cat dies, and the “ding dong” comes at the end as a sort of church bell dirge.

Many other such poems for small children are nearly as old. “To Market, to Market,” “London Bridge Is Falling Down,” and “Jack Sprat” are just some of the children’s verses written between the 17th and early 19th centuries.

By the Victorian Era, sometimes called a golden age of children’s literature, authors such as George MacDonald and Beatrix Potter were pumping out stories aimed at young readers. Among these were poets who composed nursery rhymes and songs for the wee ones. In her “Rhymes for the Nursery,” published in 1806 and written in collaboration with her sister, Anne, British writer Jane Taylor introduced “Twinkle, Twinkle Little Star.” Although some controversy exists about the identity of the original author of “Mary Had a Little Lamb,” Sarah Hale, also known as the “Mother of Thanksgiving” for promoting that holiday, first published that piece in her “Poems for Our Children.” This poem became so famous that Henry Ford preserved the schoolhouse visited by Mary’s lamb, and Thomas Edison used the verse for the first audio recording on his newly invented phonograph.

As we can see, many of these rhymes are old, and many center on rural imagery—sheep, barn cats, farm chores. So what’s the point in teaching them to modern-day children? Few of us plow a field or tote water from a well. Where’s the relevancy?

Besides the fact that most 3-year-olds couldn’t give a hoot about relevance, there are other reasons to teach them these poems.

Tradition. Not only do these Mother Goose rhymes stretch back into the past, but the odds are likely that grandparents, other family members, and friends will know them as well; nursery rhymes are a bridge between generations. Grandma remembers how to play “Pat-a-Cake,” and Uncle Charlie will get a kick out of teaching his nephew “Purple Cow.”

Literature. What are these nursery rhymes if not an introduction to poetry and story? The youngster who learns “Little Boy Blue” and “Three Blind Mice” is ready to hear or memorize Robert Louis Stevenson’s “The Swing” and Christina Rossetti’s “Who Has Seen the Wind?” As they add to their repertoire of words, they’re prepared to tackle “Hansel and Gretel” and “Snow White,” then move on to “The Jungle Book,” “Little Women,” and “Where the Sidewalk Ends.” They’re building a library inside of themselves, and the foundation stones are nursery rhymes and fairy tales.

Language. What better way to introduce the words, sounds, and rhythms of the English language than through Mother Goose rhymes? Beat, meter, unusual words, and more are the heart and soul of these gifts to the young. For instance, here’s one of the shortest of these poems:

Humpty Dumpty sat on a wall,

Humpty Dumpty had a great fall;

Pre-school kids couldn’t care less about whether this verse may refer to the death of King Richard III, and they probably won’t question why poor Humpty is depicted as an egg in a long-practiced artistic convention. But what they will love is that wonderful name, Humpty Dumpty, and the magic embedded in the beat of the lines.

The Best Reason of All for Sharing Mother Goose

Amongst the 1949 edition of the “Childcraft” set of books on my shelves is Volume 12: “Guide Index.” Here, the authors wrote words so long ago that remain true now, more than 70 years later: “From the earliest days a little child will listen with joy as his mother chants to him the age-old rhymes and songs of childhood.”

What’s doubly wonderful about these readings and recitations is that the feeling is reciprocal. The adults—parents, grandparents, and even teenage siblings—will delight in the trot and canter of the poetry and in the smiles of their enchanted audience.

Want to add more sugar and spice to your nursery rhyme time? Just Google “nursery rhyme videos” or “nursery rhyme activities,” and start exploring. You’ll even find sites with great tips on throwing nursery rhyme parties. Want to share a book instead of a screen with your little one? Head for your local library or bookstore, and you should find an abundance of choices. In my town library, there are dozens of nursery rhyme books, ranging from “Mary Engelbreit’s Mother Goose” to “Read to Your Baby Every Day: 30 Classic Nursery Rhymes to Read Aloud.” And don’t worry about repetition. Most kids love hearing their favorite poems or stories over and over again.

So there you have it. Send that “Itsy-Bitsy Spider” up the waterspout every day or read about the dish running away with the spoon, and you’ve got the kids having a blast and on the right learning track.

And that’s a twofer you just can’t beat.