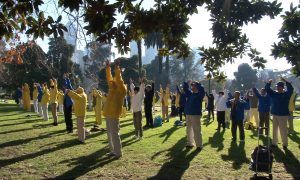 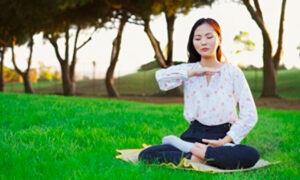 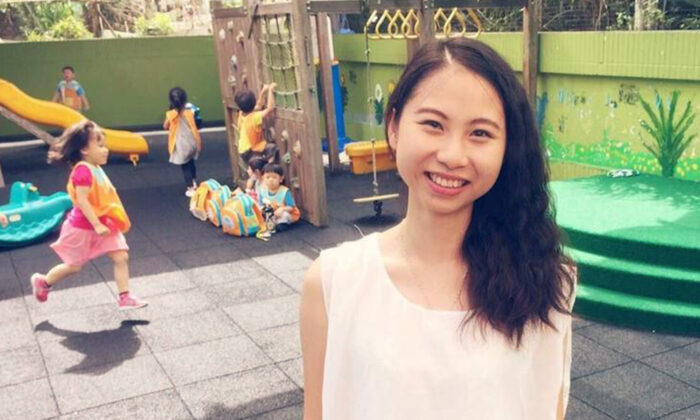 When Yang Chih Chiao was successfully transferred to the National Taichung University of Education in Taiwan in her second year, her former classmates treated the joyful news as a joke. They never imagined that a student who once ranked last in their class would be on her way to becoming a teacher.

For young Yang—who is now a kindergarten teacher—life was never smooth sailing since she was little. Her childhood was filled with gray and blurry memories, as she suffered from amblyopia, a vision-development disorder—also known as lazy eye—in which one eye fails to achieve normal visual acuity. However, after 18 years of Yang suffering from the condition, a set of events helped restore her health.

Recalling her painful childhood incident, Yang told Minghui.org that once her elementary school teacher showed them how to distinguish $5 and $10 bills.

“I couldn’t tell the difference at all,” the 31-year-old Yang said. “I couldn’t get the ball while bouncing it. That was when my parents found out that I had weak eyesight.”

Despite her finding the root of the problem of her eye disorder and starting on vision-correction treatment, Yang’s eyesight failed to improve. Additionally, Yang’s condition worsened during the treatment when her optometrist accidentally interchanged the lens of her left and right eye.

“For six months, I felt terribly dizzy whenever I put on my glasses. I cried and cried. They didn’t find the mistake until I was given my second eye exam,” Yang recalled.

Due to this condition, Yang, who scored poorly in her academics at that time, started to feel “insecure” among her classmates. As a student who had almost lost her courage due the immense suffering, she said that she didn’t know the answer to any of the questions at that time and wasn’t able to share her thoughts with her classmates.

Adding to all the misery Yang was already going through, once, the mother of the first-ranker of the class said hurtful things to her. “If my son were as stupid as you, I would have killed him!” the woman told Yang.

These words pierced through little Yang’s heart like a dagger. The unforgettable incident also became a memory that has stayed on her mind until this day. Nonetheless, the heartbroken Yang continued to try her best to do well; however, things still didn’t turn out the way she wanted. She started to feel more fearful, and her stress increased, affecting her health.

“There was not a single day when I did not have a headache,” Yang said. “I often woke up with a terrible headache.” The headache nearly affected her national college entrance exam. Yang remembered how she thought at that time “why was life was so painful” but was determined to finish her exam while having another headache episode.

“I couldn’t think at all. It was hard to move! I thought I was done,” she said.

Though Yang managed to get into college in 2008, she often wondered to herself if she would continue to suffer like this for the rest of her life. Yang had only one simple wish at that time—to lead a normal life. At this time, hope arrived.

Yang’s mother had been in immense pain and couldn’t stand straight for a period of three years due to a uterus tumor, and her doctor didn’t think surgery would help. One day, her mother was introduced to a spiritual discipline called Falun Dafa. After Yang’s mother practiced the gentle slow-moving exercises of Falun Dafa for a couple of months, her condition improved drastically.

Falun Dafa, also known as Falun Gong, is an ancient mind-body cultivation discipline practiced by over 100 million people across the world since its introduction in China in 1992. Consisting of five exercises and moral teachings based on the tenets of Truthfulness, Compassion, and Tolerance, the practice gained huge popularity and was recognized for improving people’s health.

Witnessing her mother regaining her health, Yang decided to give the practice a try. After just three months of practicing, Yang’s 18 years of suffering came to an end.

“I used to have a bad headache that even the bumps when riding a bus would cause terrible pain,” she said. “Now, riding a bus to college is fun because I finally feel like a normal person!”

With her health restored, Yang could turn her focus back to studying. She managed to transfer to the National Taichung University of Education during her second year in college. Yang’s progress left her former classmates baffled, as she was known to perform poorly in her studies in the past.

Yang then went on to obtain a Master’s degree and also became a kindergarten teacher. However, a teacher’s job can be quite challenging, especially when one has to deal with “unreasonable requests” from some parents.

Some of the requests made by some parents ranged from being asked to make fruit juice for a boy because he refused to eat cut fruits to noting down everything that the students had done in school, “including how much time they spent in the bathroom,” Yang said.

Hearing such ridiculous requests made Yang want to “argue” with some of the parents. However, she held herself back after remembering that she should be acting in accordance with the principles of Falun Dafa, namely Truthfulness, Compassion, and Forbearance. She also learned to look at things from the parents’ perspective.

“I asked myself why I hadn’t thought about why the parents reacted the way they did,” Yang said. “Children are most precious to their parents. I should correct my mentality.”

“Ever since then, I always let parents finish talking about their requests no matter what kinds of requests they are. I would show my understanding and patiently answer their questions. I became their friend,” she added.

However, overcoming these challenges and suffering at a young age hasn’t been easy for Yang. She credits the practice of Falun Dafa for making her only wish of living a normal life come true.

“It’s Falun Dafa that has given me peace and made me a considerate person,” Yang said. “I thank Dafa for giving me a new life, a truly happy and healthy life!”