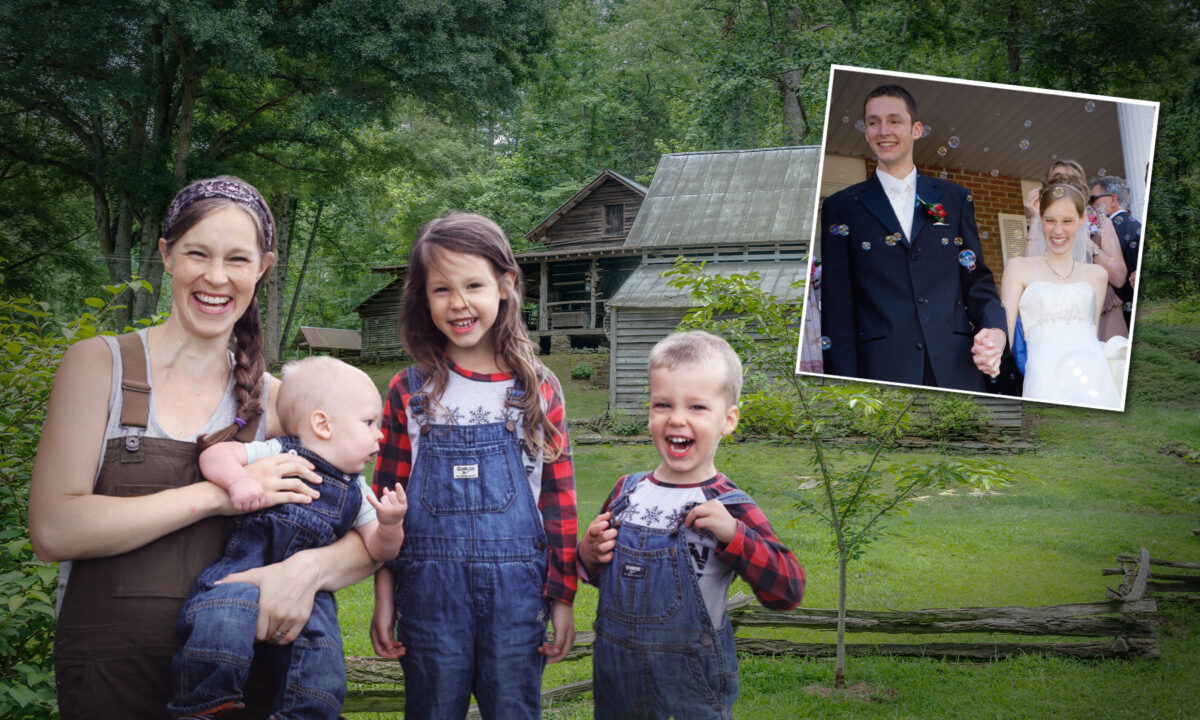 (Courtesy of From Scratch Farmstead)
People

'This whole process opened my eyes to how individual health and wellness is for everyone.'
BY Louise Chambers TIMEOctober 20, 2022 PRINT

An Illinois woman lost her menstrual periods after years of disordered eating and over-exercise. Hoping to get pregnant and start a family in a natural, healthy way, she and her husband embarked on a radical diet overhaul—and in doing so, they changed their bodies, lives, and future.

Joelle Kurczodyna, 35, lives with her husband Jim, 36, and their three children on a 5-acre homestead in northern Illinois, and they are expecting a fourth child in March.

In an interview with The Epoch Times, Joelle, who holds a degree in dietetics, shared that she had always been “very healthy and active” as a child. But all that changed once she started restricting her diet and increasing exercise.

“I never received a diagnosis, just told to go on the birth control pill to get my cycle back,” she said.

“Early on in our journey, it was tempting to just try a pill or infertility treatment that doctors were telling me would work. But I knew, in my gut, that was not the best option for us. I could have bypassed the hard journey that we endured, the weight gain and waiting. But in doing so, we would have missed out on the immense health and growth that Jim and I experienced.”

Joelle, who was once an avid marathon runner, began controlling her calorie intake as a teen just to shed a few pounds. And before long, her restrictive lifestyle intensified.

“It started innocently,” she said. “Beginning around age 16, I began restricting my eating and increasing exercise, specifically long-distance running. I was able to easily drop a few pounds, so I kept going. I began to be very conscious about counting calories, choosing low- and no-fat items, and ran almost every day.”

By her early 20s, she had already lost her cycle and weighed around 100 pounds (45 kg) or less. She was constantly cold but had hot flashes at night, her hair was thinner, and she was more irritable and withdrawn.

She said: “I was 22 when Jim and I got married. I became so wrapped up in this image of being a ‘thin runner’ that the idea of making changes was terrifying. However, my desire to have children was even greater.

“To get pregnant, I needed to get my cycle back.”

Joelle had support from loved ones as she reassessed her choices. It was her sister, who had graduated from chiropractic school, that introduced her to the concept of an anti-inflammatory diet of whole, unprocessed foods after attending a 2011 seminar on the subject.

Having decided to reclaim her life, Joelle began researching online as much as she could. She discovered the dentist and nutrition expert, Weston A. Price, whose proposed links between nutritious “real” foods and bodily health hit home.

“Being an all-in sort of person, overnight I cleared all the processed foods from our fridge, freezer, and pantry and began shopping for only real, whole foods like meat, eggs, fruits, vegetables, and dairy. I also stopped running and switched exclusively to walking,” she said.

Joelle learned that she should source her food locally, and so she began to be a regular at their farmer’s market. She wholeheartedly allowed her food to be her medicine, and began eating nourishing foods.

In the first year of eating real food and listening to her body’s natural hunger cues, Joelle gained 40 pounds (18 kg). She struggled to accept her changing body and cried a lot, but her hot flashes disappeared, her hair thickened, and she laughed more than she had in a long time.

After 12 months of Joelle’s new regime, her cycle returned.

“It was so exciting to know that my body finally felt safe enough for my cycle to come back after years of being in a state of stress,” she said. “However, I knew I still had a road ahead of me. There were clear indications that my hormones were out of whack and there was more healing to do.

“It took another whole year before we got pregnant and actually had a miscarriage. At that point, I knew my body still wasn’t at an ideal place for conception. So, we took the next several months to just focus on nourishment, rest, and fun.”

A year after her miscarriage, Joelle and Jim became joyfully pregnant with their first child—a daughter. They named their baby girl Eloise, meaning “healthy woman,” to reflect their hopes for her.

“While it seemed so long at the time, looking back, I’m grateful,” Joelle said. “My body had time to do the healing that it needed so that when she was conceived, I was coming from a place of nourishment and was able to give her everything she needed to be a strong and healthy baby.”

Having a child encouraged Joelle and Jim to reassess their goals. Together they wrote a “family mission statement” and made their shared values tangible. They already kept chickens, large gardens, and a beehive on their 1/3 acre lot in the suburbs, and were immersed in the local food and farm culture, but hankered for a homestead on which to do more.

“We knew the right move for us and our values was having some land and freedom to really live the homesteading life we were after,” she said.

Today, Joelle and Jim have the plot of land they dreamed of with a dog, two cows, chickens, and some pigs. Joelle home-schools the children, Jim left construction to pursue agriculture, and the couple runs a blog together to share insights, tips, and recipes: From Scratch Farmstead.

Joelle reflects that the hardest journeys in life are often the most rewarding.

She said: “This whole process opened my eyes to how individual health and wellness is for everyone. I was pretty turned off early on by the one-size-fits-all treatment options I received from doctors that in no way seemed to address what I was dealing with.

“Some can have a very healthy pregnancy while being a size 2—this wasn’t me. My body needed to go through some pretty drastic changes to be ready to support another life. In the end, I needed to be my own health advocate … this was a tiring and sometimes lonely path, but it was ultimately empowering to educate myself and be in tune with my body in ways I never knew were possible.”