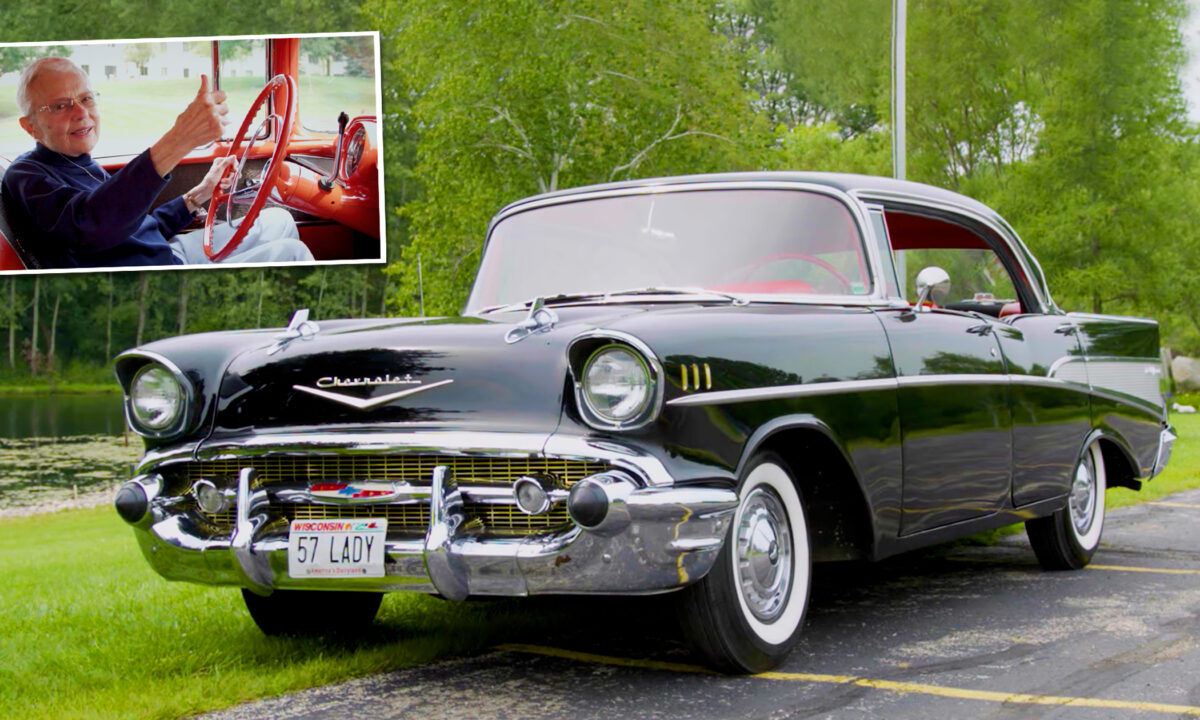 For over 64 years, the owner of the 1957 Chevrolet Bel Air has taken such good care of her car, that the immaculate vintage vehicle has become associated with her identity. Today, the proud elderly driver is noticed wherever she goes.

“I know how to take care of things and this car proves it,” said Grace Braeger of West Bend, Wisconsin, in an interview with Barcroft Cars. “I never planned to have this car that long. It just happened!”

The secret to the longevity of this treasured car is Grace’s incredible care routine, in which she goes above and beyond the manual’s recommendations to keep the car in incredible working order.

A personalized license plate reads, “57 Lady,” the nickname Grace has earned for herself from those who love to see her drive.

Grace’s Chevy boasts power brakes and power steering, four doors, a sleek black paint job with white and chrome accents, a red interior, and a massive steering wheel typical of 1950s design that the slight driver now peers under, not over, while driving.

As the single owner of the 64-year-old vehicle, Grace has made excellent use of the manufacturer’s lifetime guarantee to keep her car in great condition. Keeping the original receipts came in especially handy when Grace needed to replace her mufflers after 62 years of use.

In the late 1970s, when the car was about 20 years old, the protective owner scared away a potential carjacker on her way to church.

“It was parked on a side street,” Grace recalled. “I approached the car and somebody was getting out from the other side, I yelled ‘Who are you,’ and he was gone.”

Through the years, the Chevy has driven over 122,000 miles, many of which were amassed in Grace’s more “active years” of ownership.

These days, Grace uses her conspicuous ride for shorter journeys, such as to the church, to the grocery store, and to all of her West Bend appointments—delighting fellow drivers along the way.

She stresses that the car is not just any car, but one that is very “superior.”

“Year after year, they went by, and I was so happy with it, and everybody else is happy with it,” she reflected. “Why give it up?”