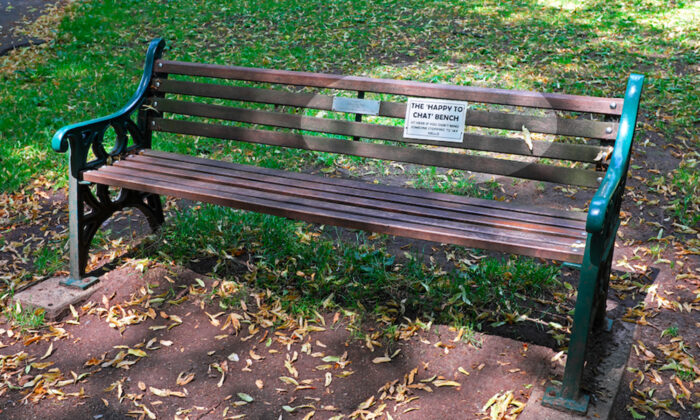 After witnessing an elderly man sitting alone and ignored on a park bench for 40 long minutes, an onlooker was motivated to start an anti-isolation movement in her local community. The movement caught on.

“There was some of that British reserve that made me think he may think me weird if I sat next to him,” 53-year-old Allison Owen-Jones, from Cardiff in Wales, told the BBC. But Allison was touched by the elderly man’s apparent loneliness, and her imagination was sparked.

“I came up with the idea of a sign that would open avenues for people [to chat],” Allison explained. “I didn’t want it to sound too vulnerable, so I wrote, ‘Happy to chat bench. Sit here if you don’t mind someone stopping to say hello.’ All of a sudden, you’re not invisible anymore.”

In May of 2019, Allison laminated a series of cards and fixed them to benches in the Cardiff city center. The local non-profit Senior Citizen Liaison Team picked up on Allison’s kind gesture and took it even further; they set up partnerships with Avon, Somerset, and Gwent police departments in order to dedicate permanent “chat benches” in central city locations.

“We wanted to highlight loneliness among the elderly but we never imagined it would prove such a remarkable success,” Detective Sergeant Ashley Jones of Aberdare reflected. “We’ve been contacted by people all over the world, all eager to take up such a simple idea.”

Jones became personally invested in the idea of chat benches after an interaction with an elderly widow who was the victim of a financial scam. The widow was called every day by a man masquerading as her friend; eventually, the scammer convinced the widow to send him close to $31,000.

According to the Washington Post, the widow told Jones she “didn’t mind” sending the scammer her money, telling the police officer, “Otherwise, I would never speak to another person for weeks on end.”

Saddened by this example of profound social isolation in his community, Jones and his department dedicated chat benches in two local parks, Taunton and Burnham. Jones’s signs reflected Allison’s original message: “The ‘Happy to Chat’ bench. Sit here if you don’t mind someone stopping to say hello.”

On June 15, 2019, the department shared their latest mission on Facebook. “Have you seen our ‘Chat Bench’ in Burnham or Taunton?” they began. “Simply stopping to say ‘hello’ to someone at the ‘Chat Bench’ could make a huge difference to the vulnerable people in our communities and help to make life a little better for them.”

The Avon and Somerset Police and Crime Commissioner released a statement in conjunction with the inauguration of the “Happy to Chat” benches. They stated:

“Sadly there are a growing number of criminals who seek to take advantage of our senior community. Older people can be more vulnerable to cons and fraud, doorstep crime, distraction burglary, and online/telephone scams.”

“Isolation can leave people more vulnerable,” the statement continued. “We can all make a difference by just saying hello and keeping an eye on our neighbors. Not only will it reduce loneliness and perhaps mean they have spoken to someone that day, but it can reduce the likelihood of them being victims of crime.”

Today, thanks to social media, “Happy to Chat” benches are springing up in locations all around the globe.

The next time any of us are sat on a bench in a public place, we might consider extending a friendly “hello” to a stranger; it could genuinely change someone’s day for the better.