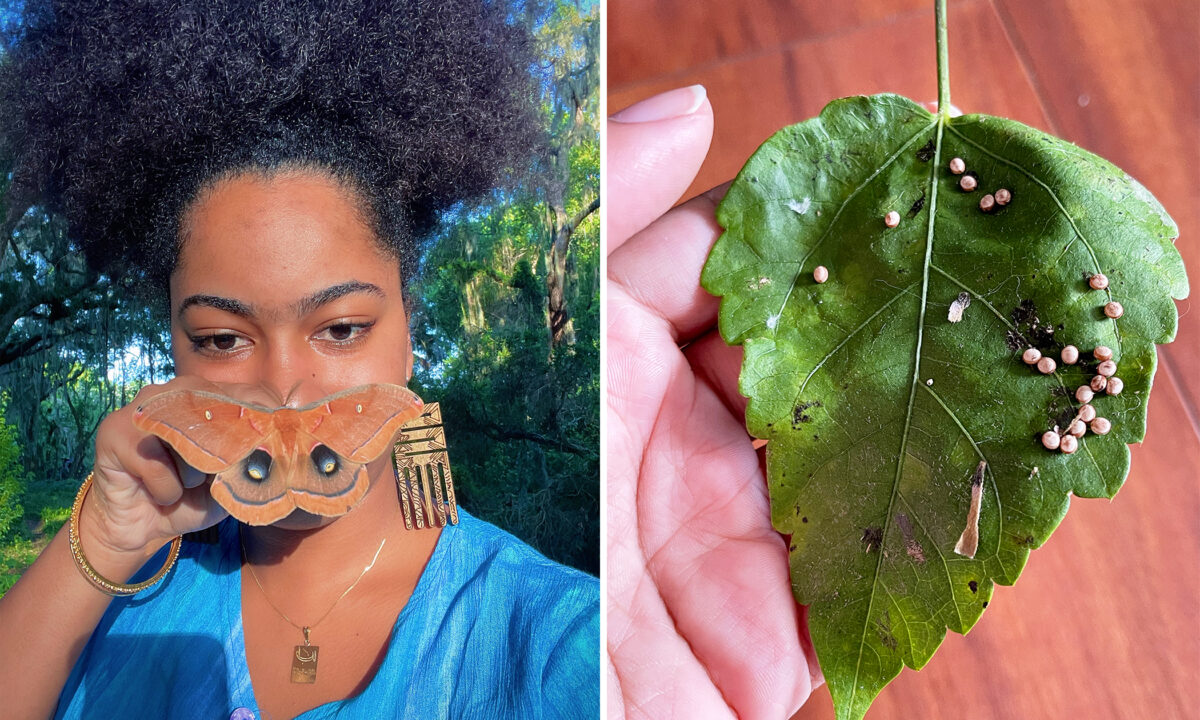 Woman Spends a Day With a Female Moth, Cares for Her 200 Eggs When She Flies Away

A Florida woman’s life was changed forever after spending the day with a friendly female moth. When the insect laid 200 eggs and flew away, she decided to raise them herself until they hatched.

Since then, Florida-based psychology graduate Tala has been known as “Moth Mom,” and her new hobby of hatching moths has taken social media by storm.

It all began in January 2021, when Tala’s mom called her after finding a giant bug on her car.

“I went there and saw it was a huge moth, the biggest I’ve ever seen,” Tala told The Epoch Times. “At that time, I was very scared of all bugs and butterflies, but I decided to sit down and record a little bit … but I wouldn’t touch it.”

As Tala sat, a breeze blew the huge moth to the ground. Unable to fly, the brave insect crawled toward Tala and settled on her hand; Tala let her stay.

“I was surprised that she didn’t move a lot or fly away,” she recalled. “She just sat on my hands all day.”

As she sat on Tala’s hand, she decided to do some research on the moth.

That night, Tala placed the moth on a plant in her yard, expecting her to fly away, but she was still there the following morning.

“There was another moth, a male,” said Tala, “and they were mating when I saw them, so I was really excited … at night there was a big storm coming, and I was scared that maybe she would get hurt so I brought her in. The other moth flew away.”

Overnight, Tala noticed the moth was laying eggs. The next morning, she flew away, leaving her clutch behind. Tala was sad to see her go, but reconciled to “make it up” to the moth by taking care of her babies.

Tala had spent her free time drawing and making costumes before the challenge of raising 200 moth eggs fell into her lap. She started researching and dedicated the next few months to watching the clutch grow from caterpillars into moths.

As she cared for these eggs, Tala collected oak leaves from her own yard and neighborhood, replacing them every few days. She cleaned the caterpillars’ containers a few times a week and watched them shed their skins five times over two months as they grew and grew.

In the last stage, they made their cocoons and hatched into beautiful moths after two months of incubation.

Tala saw 160 caterpillars make it to the final stage, but laments that some got sick along the way. “Sometimes they say maybe a bacteria came in, or something from the plant infected them, but it’s hard to figure out,” she explained. “You feel like you did something wrong, but in reality, it’s just how nature works.”

Tala was at an exam at home when her first moth hatched, and had to contain her excitement. When her exam was over, she filmed the hatching and did more research to find out what happens next.

She learned that they figure out how to fly on their own, in comparison to butterflies, who depend on the sun’s energy to fly and grow their wings. Meanwhile, moths, only have to shake their wings for a minute or two, after which they just fly away.

“Once they turn into moths, their mouths don’t work, so they can’t eat or drink,” she continued. “They usually only live for a week, but as soon as they come out of the cocoon, they get ready to mate, then they spend the next couple days laying eggs, and then eventually they grow old and pass away.”

The moths’ short-lived existence made Tala especially grateful for the privilege of caring for her clutch, and watching them grow into “beautiful creatures.”

She let her moths go into parks, in small groups so as not to cause overpopulation.

“The first time it was very hard; I wanted to keep them,” she admitted. “But I know that it’s their nature to go out and mate and continue their cycle, and I didn’t want to ruin that … I missed them, but it was nice to know that they had a good life from the beginning.”

Tala’s moths, who boast brown and blue “eyespots” on the tops of their wings, have also helped her overcome an irrational childhood fear.

“I thought they were something really big and scary,” she recalled. “Now when I look at them and I see these ‘monster eyespots,’ it doesn’t scare me anymore. I see the beauty in them, and I like how they use them to scare off other big animals!”

Meanwhile, the moths, who are docile and easy to handle, have allowed Tala to get close and learn a lot. Keen to share her newfound love with the world, Tala started hatching moths regularly and sharing footage on TikTok and Instagram.

She was stunned when her videos went viral, but acknowledges that there’s a long way to go before people stop thinking of moths as “big scary spiders with wings.”

“People are saying, ‘Moths destroy my clothes, they eat furniture, they eat everything, they’re uglier than butterflies!'” she lamented. “But that actually inspired me to share more, because I want to change people’s perspective.”

Tala also revealed that she houses her moths and butterflies in an outdoor tent, where male moths come to mate at night after being attracted by female pheromones. During the day, Tala handles the insects and lets them lounge on the curtains in her home.

Saying goodbye has gotten easier for Tala over time. However, she said: “After raising them, I got to appreciate the little things in life that, before, I didn’t really pay attention to.”

The “Moth Queen” advises anyone interested in raising moths or butterflies to always research beforehand. She also suggests procuring a clean container, feeding them daily, and not beating oneself up if some get sick or don’t make it.

She added: “But as long as you keep everything clean and make sure they have enough food, you get to watch them grow into big, beautiful butterflies!”